Once upon a time, there was a young woman who decided washing and re-using zip lock bags was a worthy practice. So she vowed to be an economical, frugal and faithful steward of what she had.

However, after several years of washing bags and living in a home with limited counter space, this (nameless) young woman became frustrated, even found herself wishing she had not taken the oath.

The Reason for This Frustration

Bag washing was very easy. And the young woman was grateful for the opportunity to soften her work-stained hands in warm, soapy water. Her frustration stemmed not from the work, but rather the length of time required to air-dry the bags.

Finally, the gentle, hardworking woman began losing her zeal for frugal living! Everywhere she turned in her kitchen, she found bags, bags and more bags set out to dry.

It Was a Matter of Honor

Convinced that her intentions were honorable, she attempted to change her methods.

Hoping to generate more air flow, she placed her overturned bags on the wooden spoons in the drying rack.

When that didn’t speed the process, she tried drying the bags with her best tea towel. It was difficult to reach into the corner-most edges! Often, she found herself folding and slipping mostly-dry bags into a drawer, earnestly hoping the moisture wouldn’t cause mold growth!

In final attempt to honor her conviction, she tried flipping the bags inside out before washing and setting them out to dry.

It worked! Her success was sweet, but short-lived.

For alas, an unforeseen problem soon arose: the constant turning from inside-out to outside-in tore the edges of her precious zip locks, significantly decreasing their value. They no longer held a seal!

After this experience, the young woman began to feel twinges of defeat. She even began wondering if she should break her vow of frugality?

The Knight in Disguise

One day, the young woman found a handsome young man heartily washing dishes in her kitchen. While she was  grateful for his help, she also felt a bit perturbed.

This woman was a goodhearted soul but like all of us, she had her faults. You see, she sometimes felt…well…frustrated after this man left the kitchen.

As if under a spell, items suddenly went missing. After hunting cupboards three times through, the measuring spoons appeared in the strangest location. The homemade bread disappeared completely. Days later, in the basement of their house, she would find her small-mouth funnel amidst the car’s oil-changing equipment.

While she fumed over these strange happenings, the young woman (like many) didn’t realize she was missing the forest for the trees. She didn’t stop to consider the good effect a fresh mind could have on her kitchen and particularly, her troubles with the zip lock bag!

The Genius Knight with Dish-soap Hands

This is how it happened: the aforesaid young man washed those dishes until he came to the zip locks. After washing and rinsing them, he proceeded to tip each one upside down and settled it over his large hand. Shaking it, he released water droplets that clung to the bag’s wall and proceeded to set each one right side up for drying.

Which took place within the hour. One hour!

The (nameless) young woman saw this and was humbled. In spite of the strange spell that settled over her kitchen after the young man left, she saw that she needed his perspective. She suddenly realized that when going through the motions of daily work she didn’t always take time to think logically and scientifically. Yes, she needed him.

Today, the young woman washes, rinses and dries her bags right side up. After a hour or two, they can be folded and stashed in her drawer. She is happy; her kitchen is no longer littered with zip locks and she has had a lesson in humility. A wiser woman she has become, all because of her battle with the bags!

P.S. Kitchen items do still disappear from time to time. Perhaps that’s just part of having a knight around?! 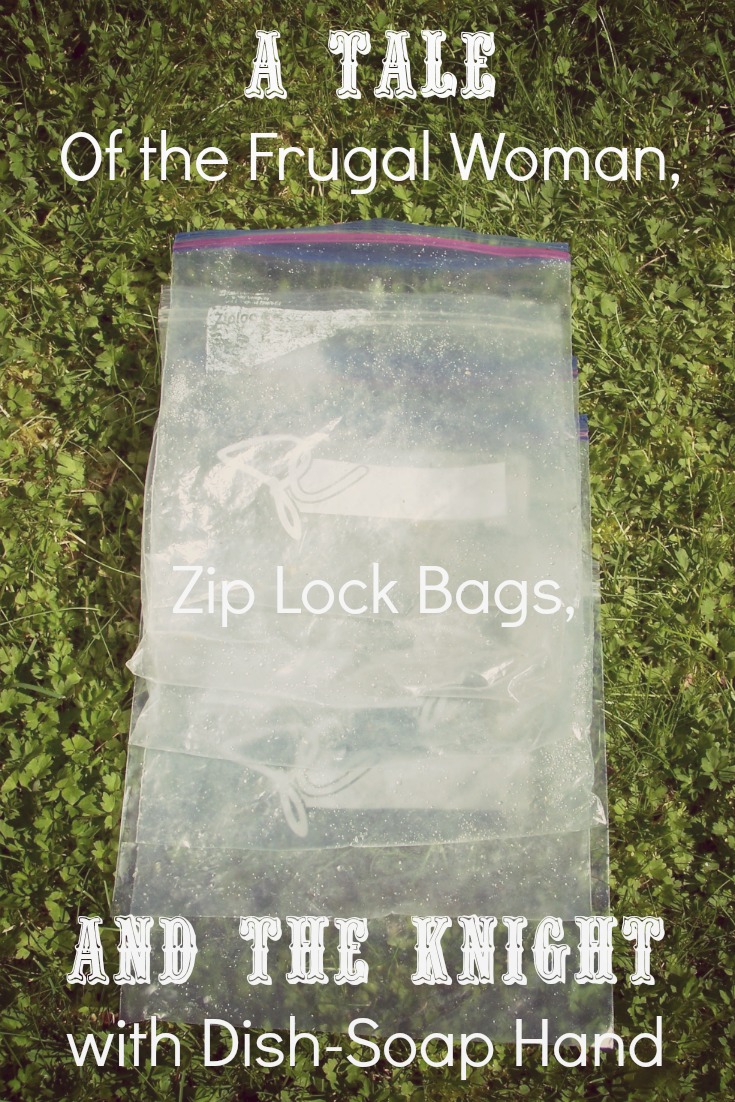 Previous Post: « The Most Important Thing About a Dream Home
Next Post: 7 Things You Should Know About Pectin-Free Canning »