When my man and I bought the mountain farmstead with it’s rocky, sandy, gravely soil, we knew alternative gardening methods were a must. For our cottage garden beds, we scraped rock and sand away, then filled the space with topsoil from our land. But for the kitchen garden, I wanted something different. Something unique and ideally, some sort of raised bed.

If you’ve been following my blog for any length of time, you know hugelkulturs have been on my radar for a while!

I’m here to tell you that early this spring, they came off my radar and into reality! I’m going to tell you all about my first time building hugelkultur garden beds! Who knows but that some of you could also benefit from this type of permaculture garden?

What Is A Hugelkultur?

A hugelkultur (pronounced hoogle culture) is a permaculture garden bed that originated in eastern Europe. They work wonderfully for poor soil because the entire thing can be created above ground. These beds are known for retaining water and because they have decomposing material within, they actually create warm growing soil from the inside out. Not a bad thing when you live in a colder climate!

Hugelkulturs are odd, because the entire base is composed of logs. From there, you create several layers of…but wait! Why don’t I just show you photos and walk you through exactly what we did?

By the way, I first heard about hugelkulturs over at yellowbirchhobbyfarm.com. You’ll want to go over there and check it out! 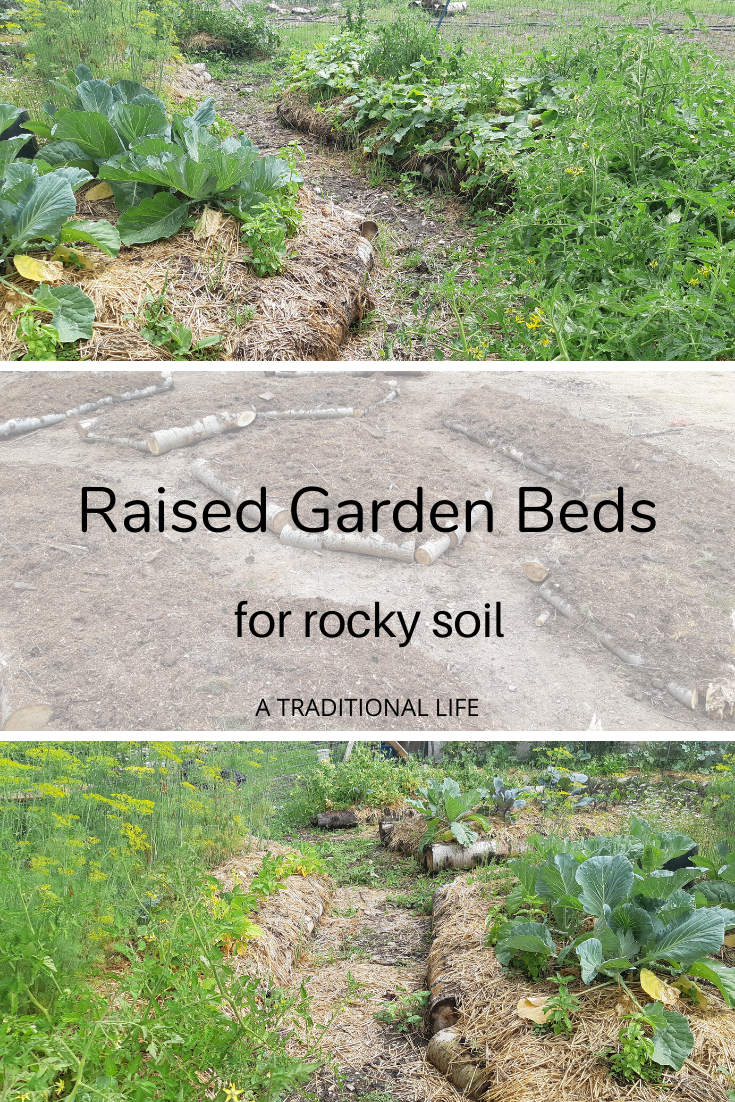 Because we just cleared our land for building, we had lots of poplar (or is it mountain cottonwood?) logs on hand. A mini excavator helped us move the logs to the kitchen garden site, and my man’s Husky chainsaw cut them down to manageable lengths.

It was time to start building hugelkultur garden beds on the mountain farmstead!

In the case of the kitchen garden, I didn’t want a typical, rectangular plot. Something cute. Functional. Unique. A hexagon. That was it. With a solid bed in the center.

I set myself to work and after lots of tugging, pushing and pulling, the layout finally began to take rustic shape. Need I mention I gained a few callouses in that time?! 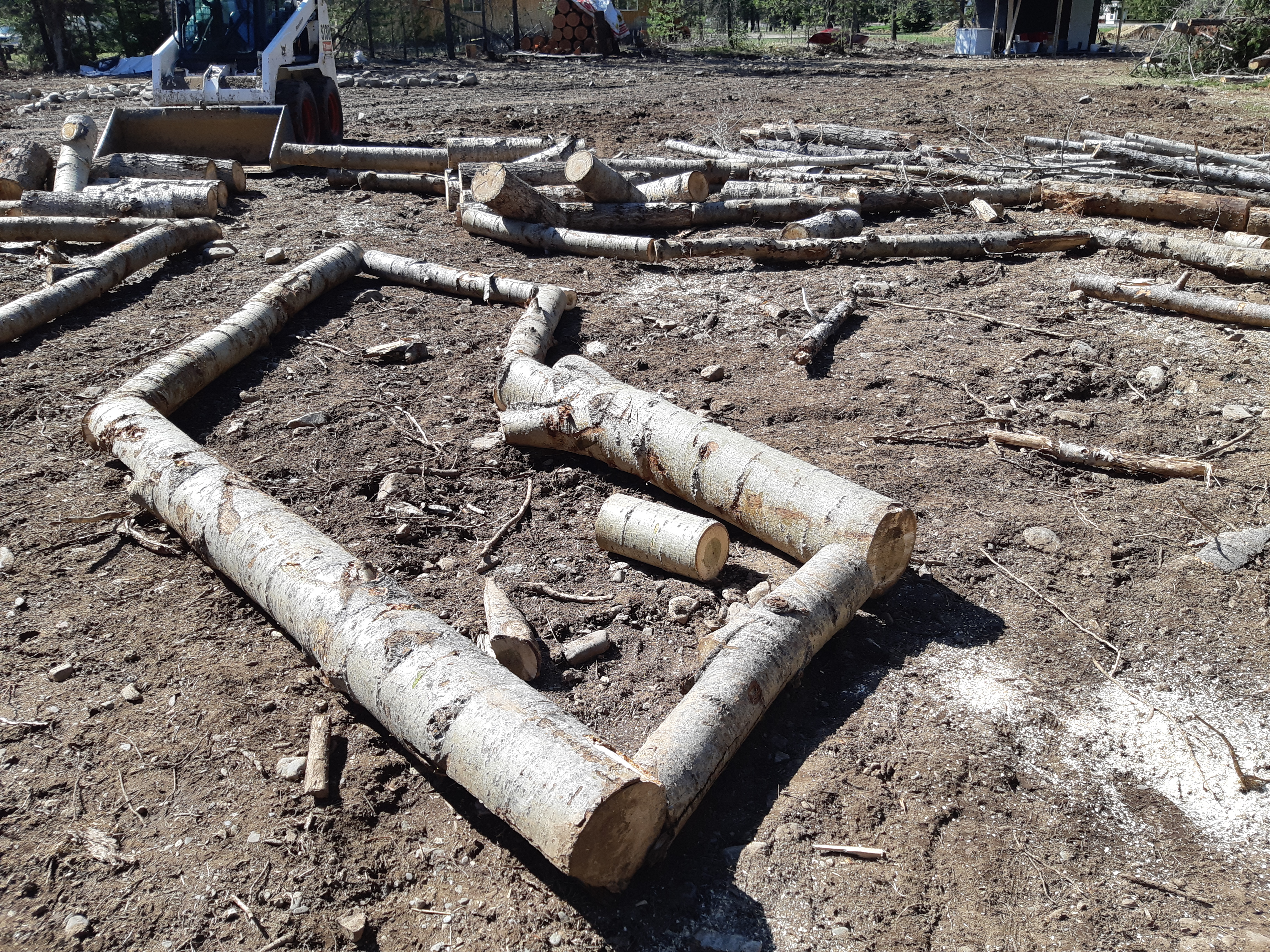 Filling the Outline With Wood

Once I had the garden beds outlined, it was time to fill the centers with logs! In my research, I discovered that most people make their hugelkultur beds at least 3-4 ft tall. I even saw photos and records where these beds reached 6ft in height!

I decided to go for beds that were about 3-4ft across by 2 ft high. This meant our larger logs would need to be split in half. My man took over this job! Split them, he did!

After the halves were in place, I piled on a layer or two of smaller logs, then tree branches and twigs. Not what a person typically thinks of when building garden beds, is it?! 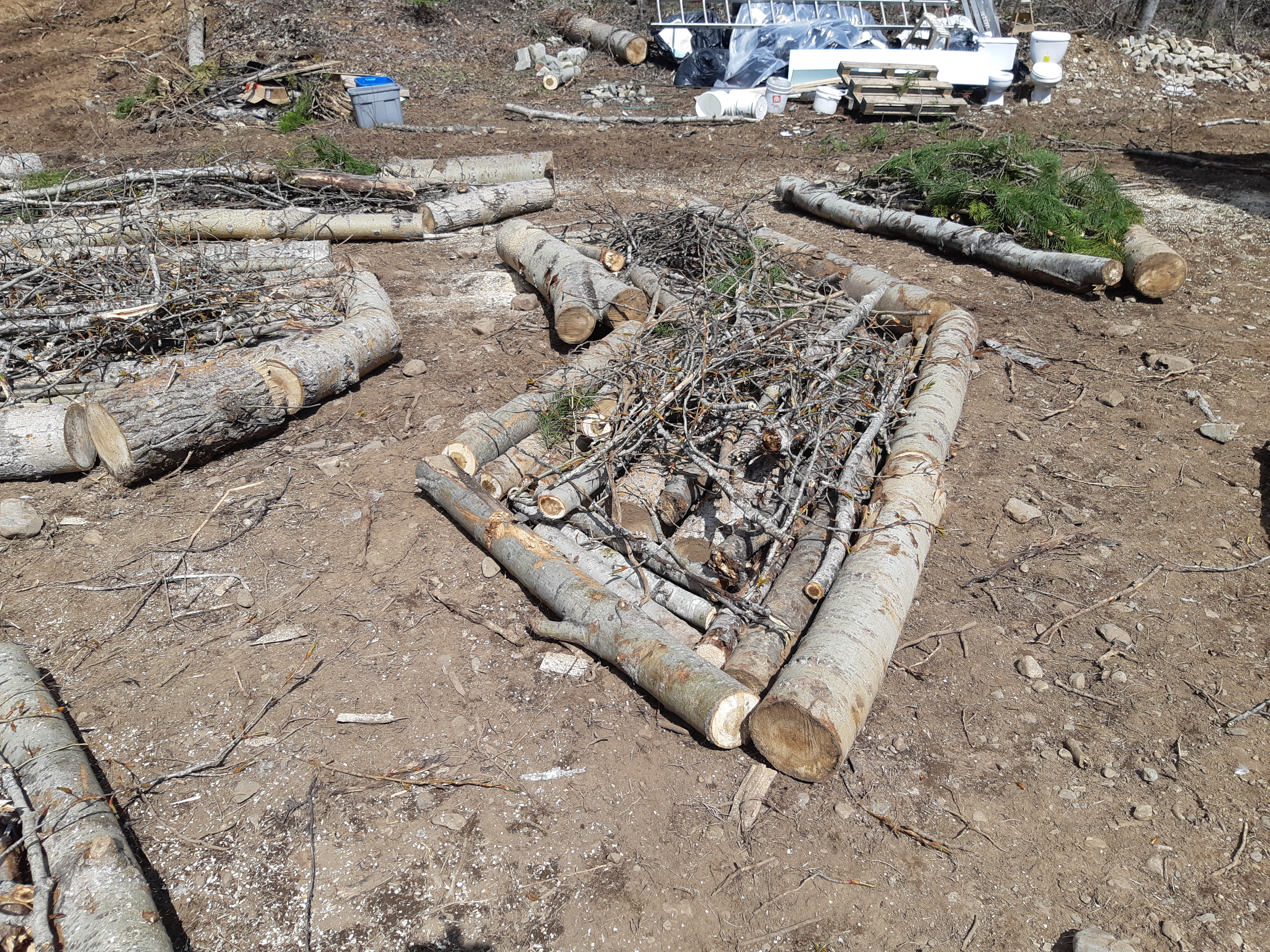 According to my research, I was supposed to spread 6-8 inches of fresh animal manure (or fresh foliage) on top of the wood base.

As wood decomposes, it absorbs most of the nitrogen in the soil. Not the best for growing food! But fresh, not-yet-composted animal manure and green foliage contains lots of nitrogen. So you see, adding a layer directly on top of the wood is supposed to help counteract the nitrogen leach that occurs. It also helps break the wood down faster. Or so my research said.

We had some cow manure lined up, but unfortunately that resource fell through. A goat-keeping friend came to the rescue by letting us take several trailer loads of manure/hay/wood shavings she had cleaned out of her goat pen that winter. 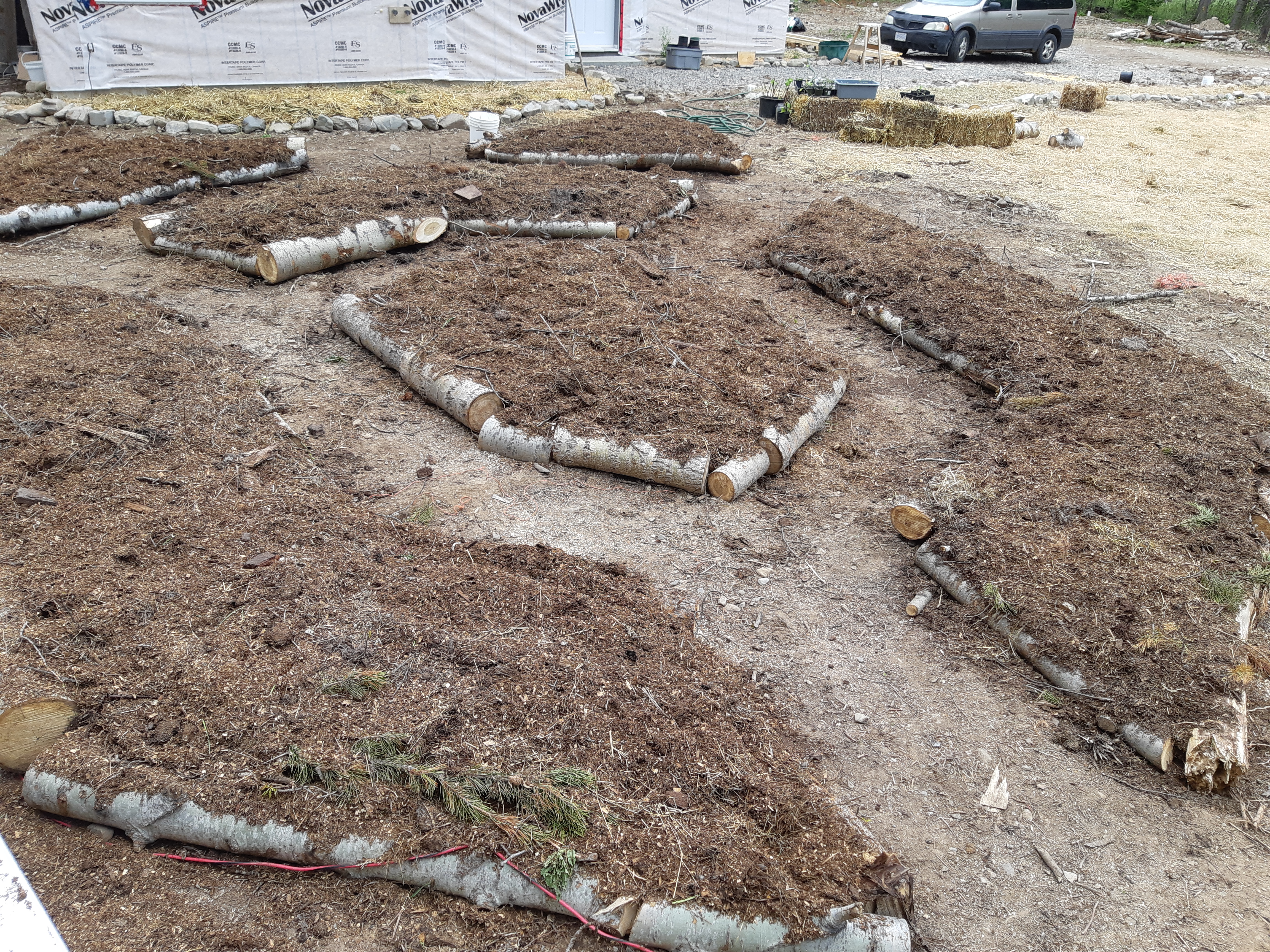 Logs, branches, leaves and the like were covered in a good, hearty, 6-8 inch layer of that manure. I tromped up and down the beds, trying to make sure the goods worked their way into every nook and cranny! Once it was down, I let the sprinkler run on it for a good, long time.

After the “hot” animal manure went down and had been thoroughly watered, it was time for 6-8 inches of good growing soil. By mixing topsoil from our land with 3 year old composted goat manure, we topped off each and every hugelkultur bed.

But the job wasn’t over yet! Rake in hand, I then smoothed out the beds, tapering edges, mounding the centers and re-arranged the soil.

There was one more layer to go!

Hugelkulturs are no-till garden beds. With all that wood beneath the surface, it just isn’t a good idea! Instead, they’re supposed to be covered in a good layer of mulch. Always!

This not only suppresses the weeds, but it helps hold moisture in. Less watering, anyone? Moisture also makes the logs decompose which in turn creates warm soil…I’ve already said that much, right?

Each and every garden bed received 2 inches of mulch. After a good watering to settle the fluffy straw, my kitchen garden was ready for planting! 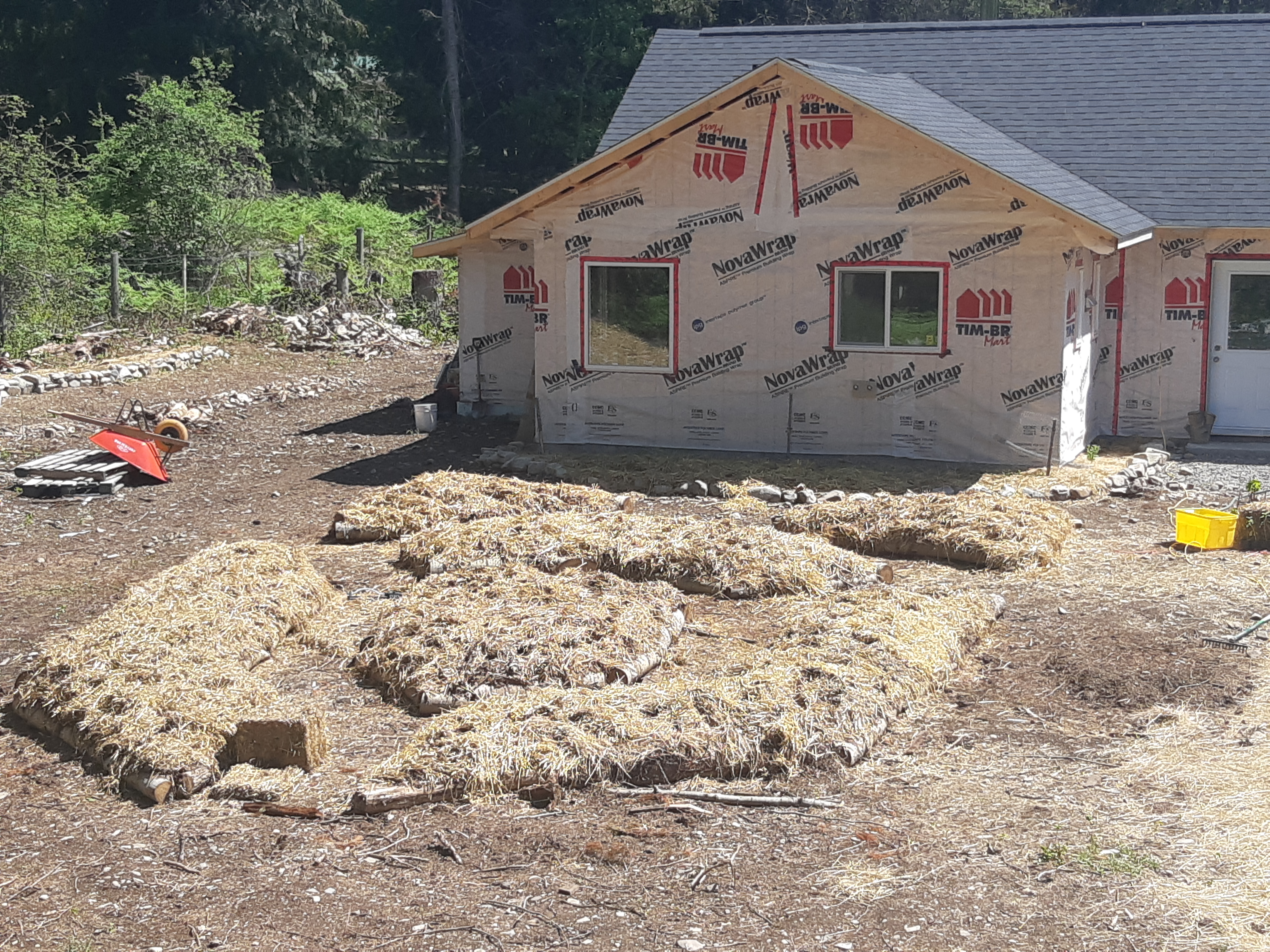 It was loads of work, building the hugelkultur beds! To plant, we (my sister-in-law helped) simply parted the straw and plunked seeds and young starts into the ground. They’ve been growing every since! 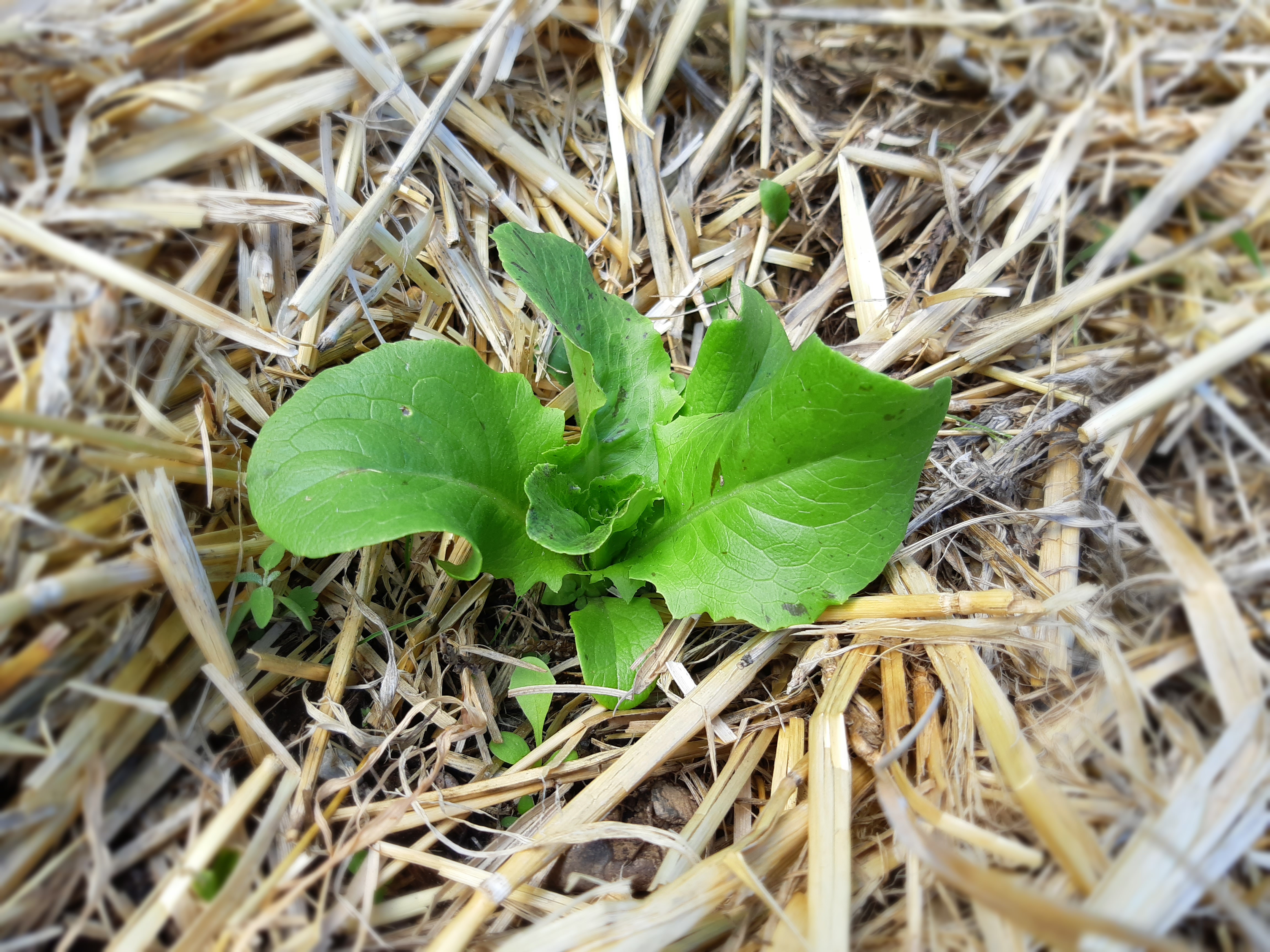 A wide variety of vegetables were put in. My man and I didn’t have time to create all the garden space we needed for staple vegetables, so my kitchen garden is growing non-kitcheny things.

But next year, these beds will grow loads of herbs, chives, garlic, lettuce, kale, spinach and whatever else this real food cook wants growing just outside her kitchen door!

These hugelkultaur beds were loads of work to create, but even at three weeks, I’m loving how healthy and vigorous most of it’s plants seem to be. I’m also facing some learning curves in this new garden.

The beds closest to the house should be for cool weather crops, because they receive less sun. Not the best place for green beans! In some beds, I should have mixed my soil better. I can tell which cucumber hills are primarily composed of top soil. And so the learning continues!

I’m new to all of this, but I have to say that in spite of being labor intensive, I’ll probably be building hugelkultur beds again next spring. It’s just possible. The place could use a few more!

Previous Post: « Sometimes I Just Want What She Has
Next Post: Of Hickory Countertops and White Kitchen Sinks »

My name is Autumn! I'm all about handmade homes, from scratch cooking, gardening, preserving and helping the modern homemaker embrace traditional homemaking skills! 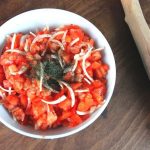 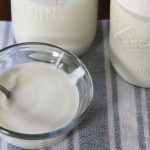 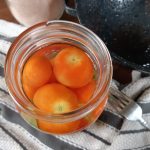 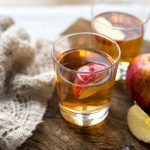