Making your own butter at home has never been easier! Unlike the taxing experience commonly shared by our grandmothers, modern butter making is almost effortless. If you have electricity in your kitchen and a milking animal on the farm, it’s time to learn how to make raw butter in a mixer!

To make butter, you’ll need an electric mixer. I love using my Bosch because it has a lid cover and keeps splatters contained.

Regardless of the brand found in your kitchen, be sure to use a wire whip attachment (instead of a dough hook) for this task! You’ll also want to line a kitchen colander with a cloth. It’ll prove itself convenient when separating buttermilk from the butter!

Lastly, you’ll need raw cream! In this tutorial, I make the assumption that you already know how to separate raw cream from your milk.

Today, we’re using 2 quarts of the thick, white goodness in our butter making. It’s the most I can fit in my mixer without making a mess! 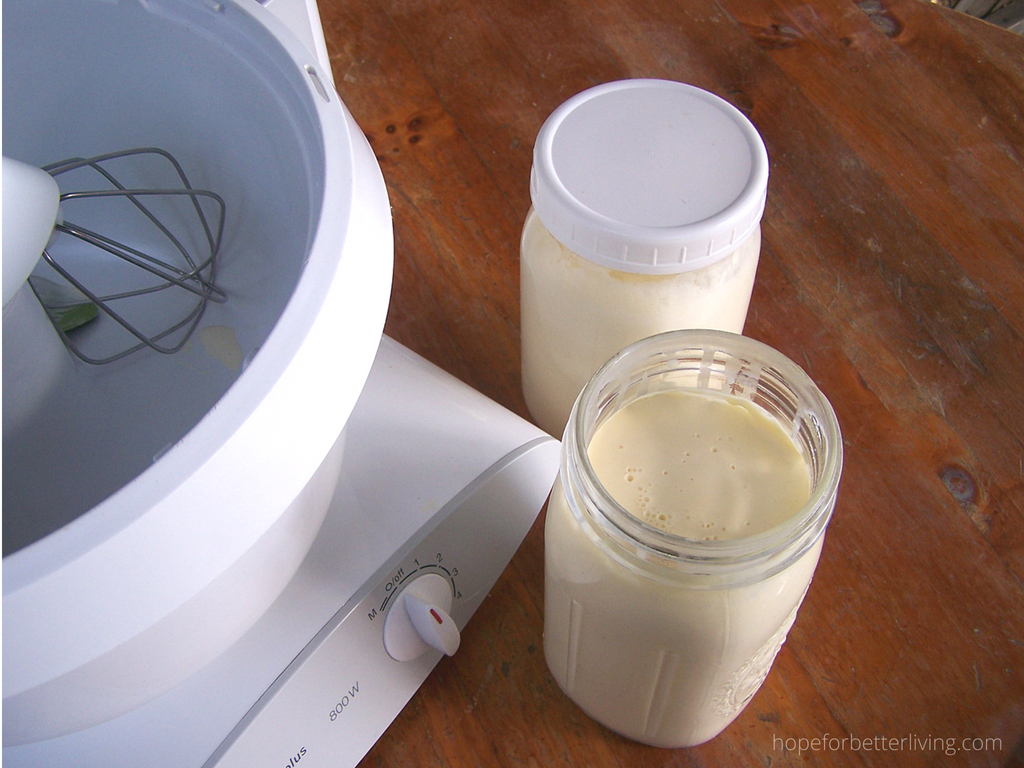 Once you have collected the amount of cream desired for butter making, remove your jar/s from the refrigerator. Let the cream sit on your counter until it reaches room temperature.

Should you want cultured butter, let the cream sit for twice as long!

Either way, allowing the cream to warm up will significantly shorten the butter making process. You should also know that 4-7 day old cream usually ‘butterizes’ faster than fresh!

How to Make Raw Butter In a Mixer

Pour your cream (in this case, 2 quarts) into your mixer. Make certain you have wire whips in place!

If you have a Bosch, add the lid cover. Should you have a Kitchen Aid mixer or the like, try draping a towel over the entire mixing stand.

Turn the mixer on, to medium high.

After about 6-7 minutes, your cream will double in height as it transforms into whipped cream! This is the first stage of butter making. 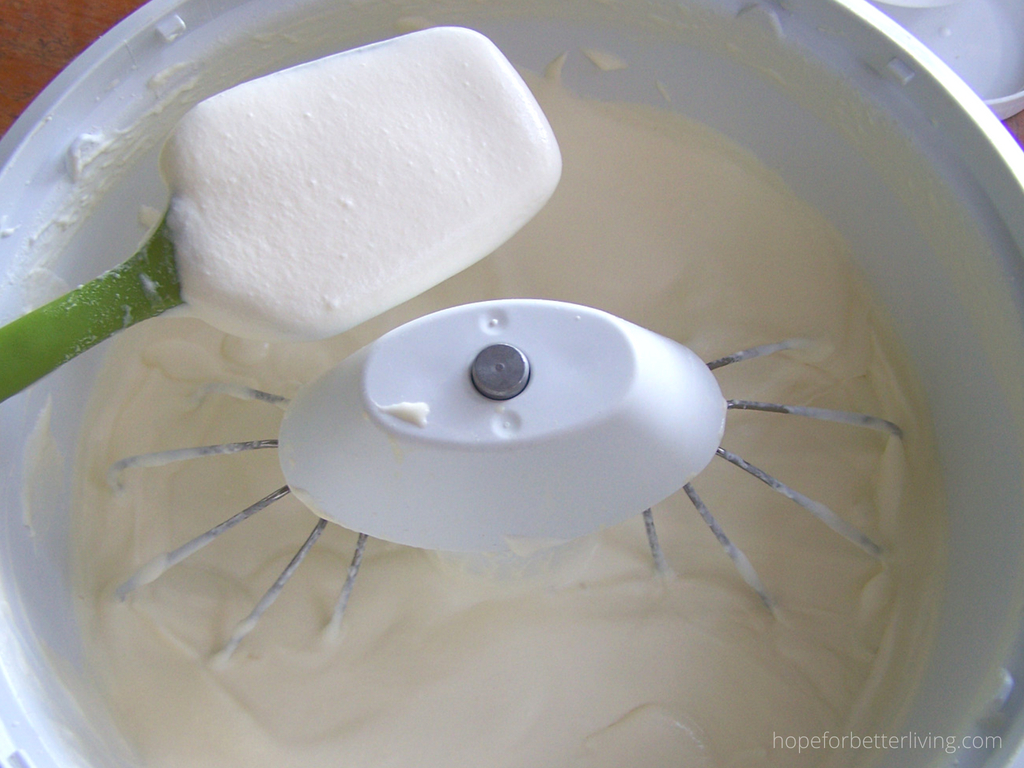 Keep the mixer running. After 7-10 minutes have passed, check it again. This time, you’ll notice the cream has turned lumpy with a cottage cheese consistency.

Leave the mixer running and shortly after, you’ll see beautiful lumps of golden yellow floating in a substance that looks like milk!

Once had, it’s time to turn off your mixer before it whips the butter itself! 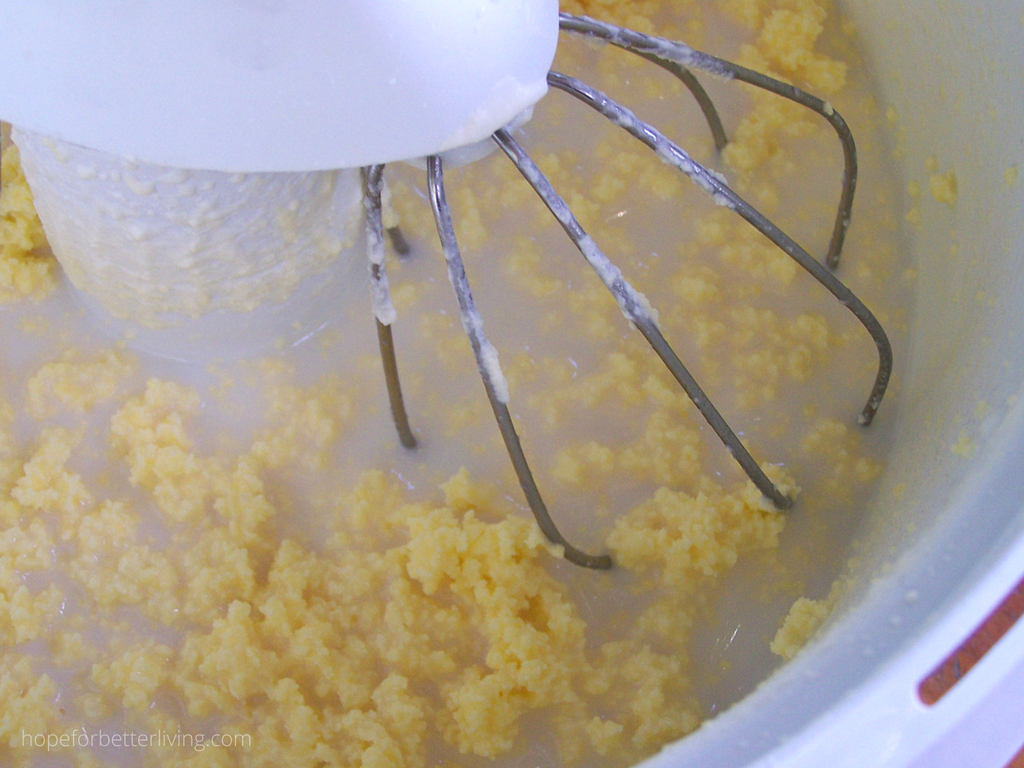 Straining and Washing Your Butter

Now that you have grains of butter in your mixer, it’s time to separate the fats and milk-like liquid, otherwise known as buttermilk!

Should you be desirous of keeping your buttermilk (for baking or feeding animals), place the cloth-lined colander over a bowl and pour the mixer’s contents into it.

If you don’t have a purpose for the buttermilk, set your colander in the sink and let it flow out the drain. 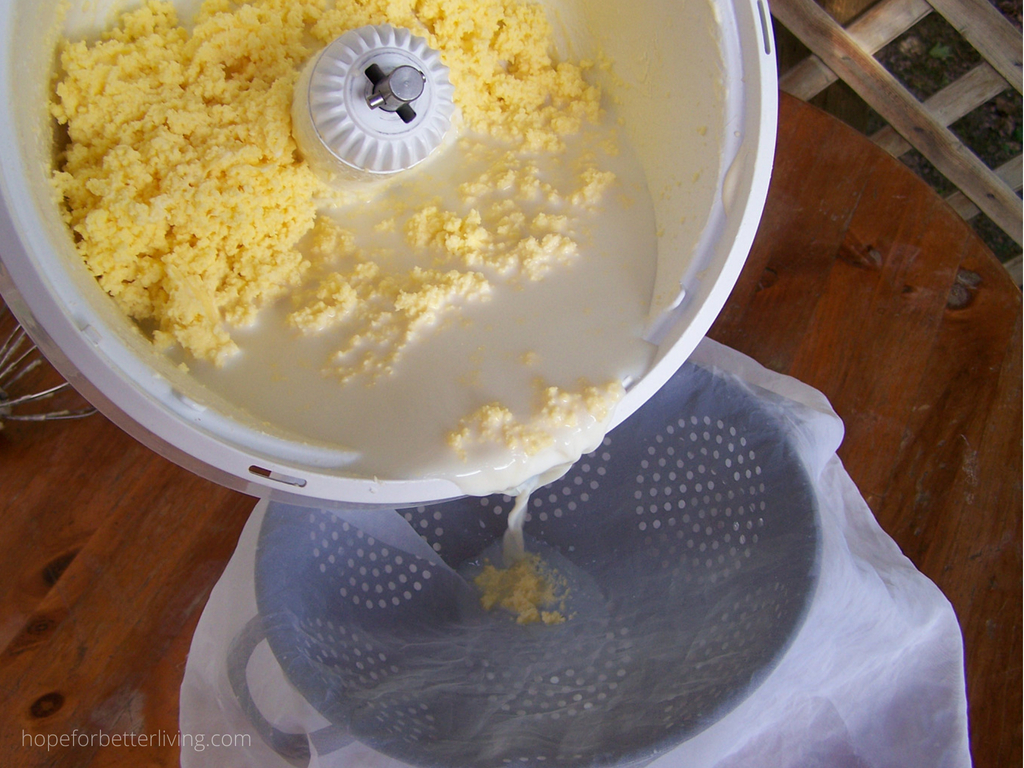 Once the solids are separated from the buttermilk, collect them up in your straining cloth. Twist the butter ’round and round, until it compressed into a ball and releases a bit more liquid. 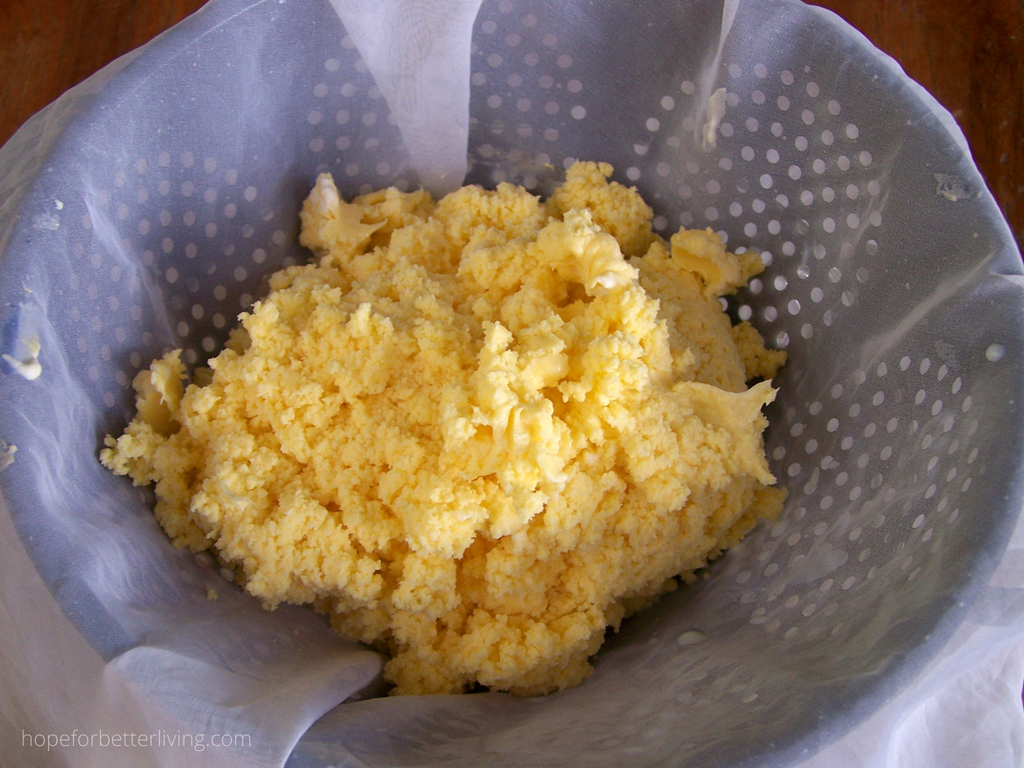 Once accomplished, untwist the butter ball from the cloth and take it to your kitchen sink. There, it should be rinsed under cold water. 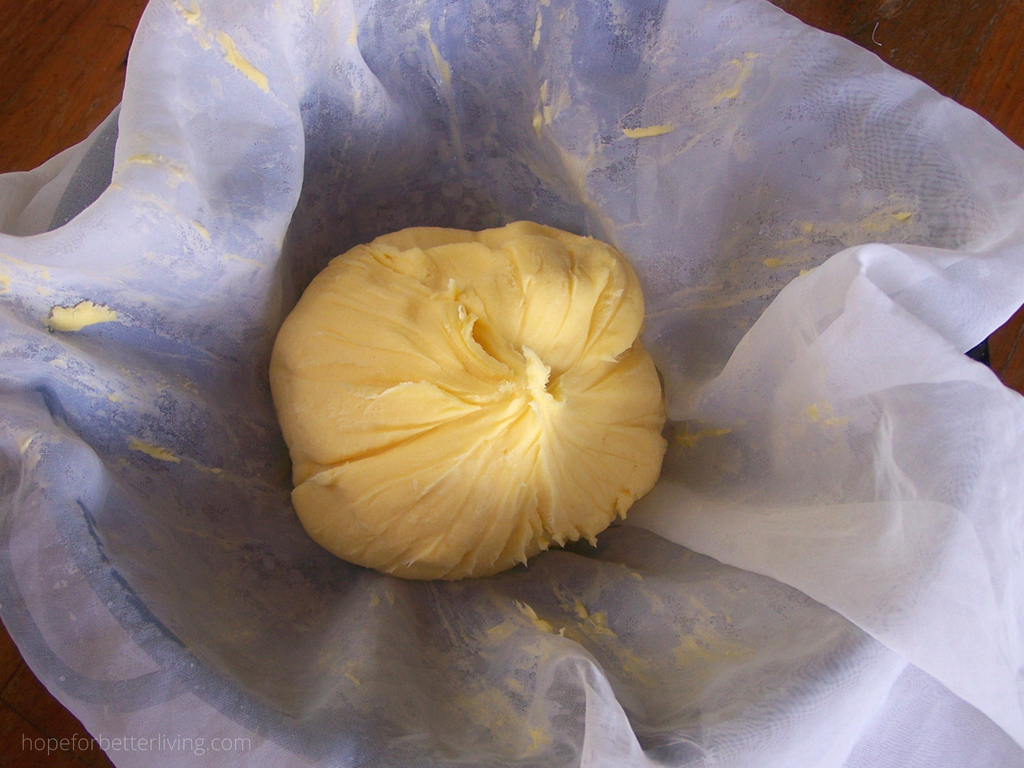 Work and ‘knead’ the butter under running water, until the flow-off is clear.

This process removes buttermilk from the butter. In so doing, you’ll keep your butter tasting fresh for a longer period of time! 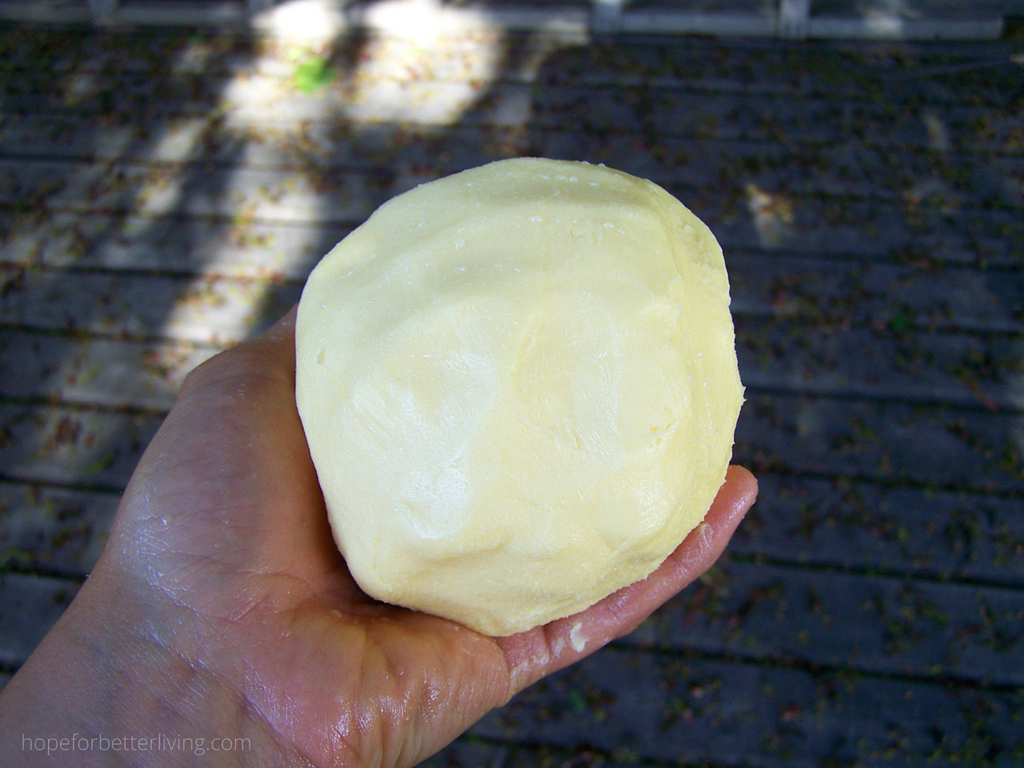 If you want salted butter, go ahead and slowly add salt after you’ve rinsed the ball. Taste test as you mix, until you’re happy with the results.

You can either eat up, refrigerate or freeze the golden goodness!

Be aware that raw butter goes rancid faster than commercially prepared butters. Unless you are making a small batch, you’ll want to wrap and store it in the refrigerator (at least!). And if you have voluminous amounts of cream coming into your home, try freezing some for later!

This, my friend, is how you make butter in a mixer! 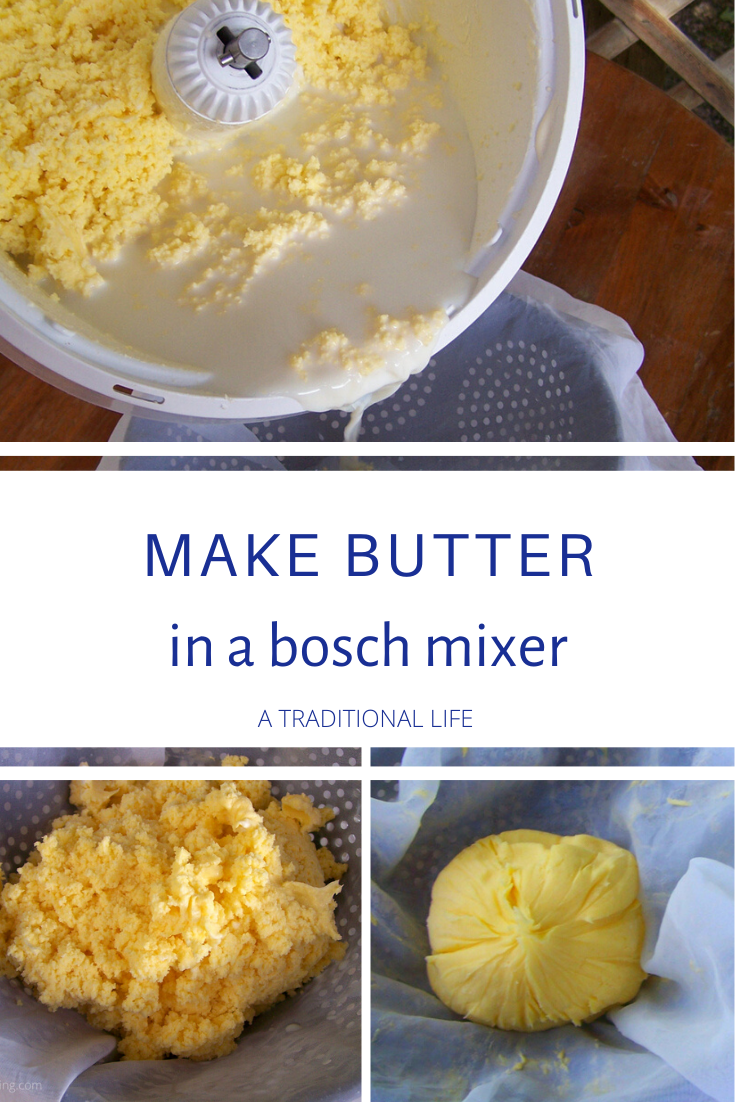 Previous Post: « How to Raise a Garden When You Don’t Have Space
Next Post: Canning Stew Meat: A Simple Tutorial »