Have you ever found yourself wondering how to cook parsnips? Traditionally, they were boiled and mashed like a potatoes. But I think there’s a better way to do it! Let me show you how to roast parsnips in the oven and create a delicious side dish for the dinner table.

When it comes to cooking root vegetables, this recipe is one of my favorites. The flavor is light and the aroma from honey roasted parsnips will make your mouth water. Best of all, it’s simple and healthy.

Do You Have to Peel Parsnips Before Roasting?

Because parsnips aren’t necessarily common in the average kitchen, many people don’t know how to prepare parsnips for cooking! And the first thing they want to know is should they peel parsnips before roasting them?

It depends. If you grow your own (I highly recommend doing so), peeling isn’t necessary. Just give the long, white roots a scrub at the kitchen sink, trim the ends and away you go!

Want to learn how to store home grown parsnips so you can eat them all winter long? I show you how RIGHT HERE.

But if you buy parsnips from your local grocery store or purchase them directly from a commercial farmer, you may want to remove the peel. As with carrots, sprays can give the skin an “off” taste, and it’s probably in the best interests of your health to remove the outer peel.

Don’t worry! It’s not hard. If you have a peeler on hand and know how to peel a carrot, you’re prepared to deal with parsnip!

Do You Need to Core Parsnips Before Roasting?

If you purchase your parsnips at the grocery store, pull them from your garden in the fall or overwinter them in cold storage, it’s not necessary to core them before roasting.

The exception lies with gardeners who live in mild climates. Often, they choose to leave parsnips in the ground over winter and harvest roots winter-spring.

Like most root vegetables, parsnips are biennials and will go to seed during their second spring. The tap root sends up a round, center stalk that will form a blossom and later, a head of parsnip seeds.

Gardeners need to quickly use up parsnips in their second spring. If they form a seed stalk, the core will become very woody and tough. And while I wouldn’t recommend eating parsnips after they go to seed, you certainly would need to core them before eating!

Do You Have to Boil Parsnips Before Roasting?

Some recipes you’ll find online require you to boil parsnips before roasting. But it isn’t necessary. And in this recipe, it isn’t required!

In fact, I think parsnips roast better when they haven’t been boiled, simply because you don’t have to cook off all that extra moisture.

How to Chop Parsnips for Roasting

Do you want to know the key to quickly making roast parsnips? It’s all in the knife and cutting board!

The smaller you dice your parsnips, the faster they’ll roast in the oven. In general, I try to make my cubes 1/2″x1/2.” But if you want, you can go even smaller than that.

How to Make Oven Roasted Parsnips with Cinnamon and Honey

Here are the secrets for creating firm and delicious roasted parsnips! 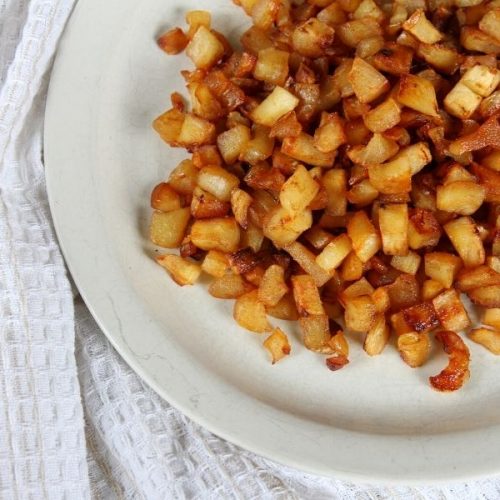 Roasted Parsnips with Honey and Cinnamon

Note: the fresher your parsnips are, the longer they’ll take to roast. Parsnips that have been in cold storage or are purchased at the grocery store will have lower water content and are likely to roast up faster. Keep this in mind as you prepare your parsnips!
Keyword oven roasted parsnips, parsnips with honey, roast parsnip

Previous Post: « Where Have I Been the Past 12 Months?
Next Post: How to Organize Your Canning Supplies »