It finally happened! Running water. A white, double bowl kitchen sink. Countertops of rich, hickory wood. The mountain cottage finally has a functioning kitchen! Not finished, mind you. But functioning!

My man had vacation time this past week, so we’ve both been tackling finishing work around here. We’re exhausted, and every day is full of new ups and downs. But I’ll try to muster what’s left in my reserves so that I can tell you about the kitchen.

Because it is pretty amazing! 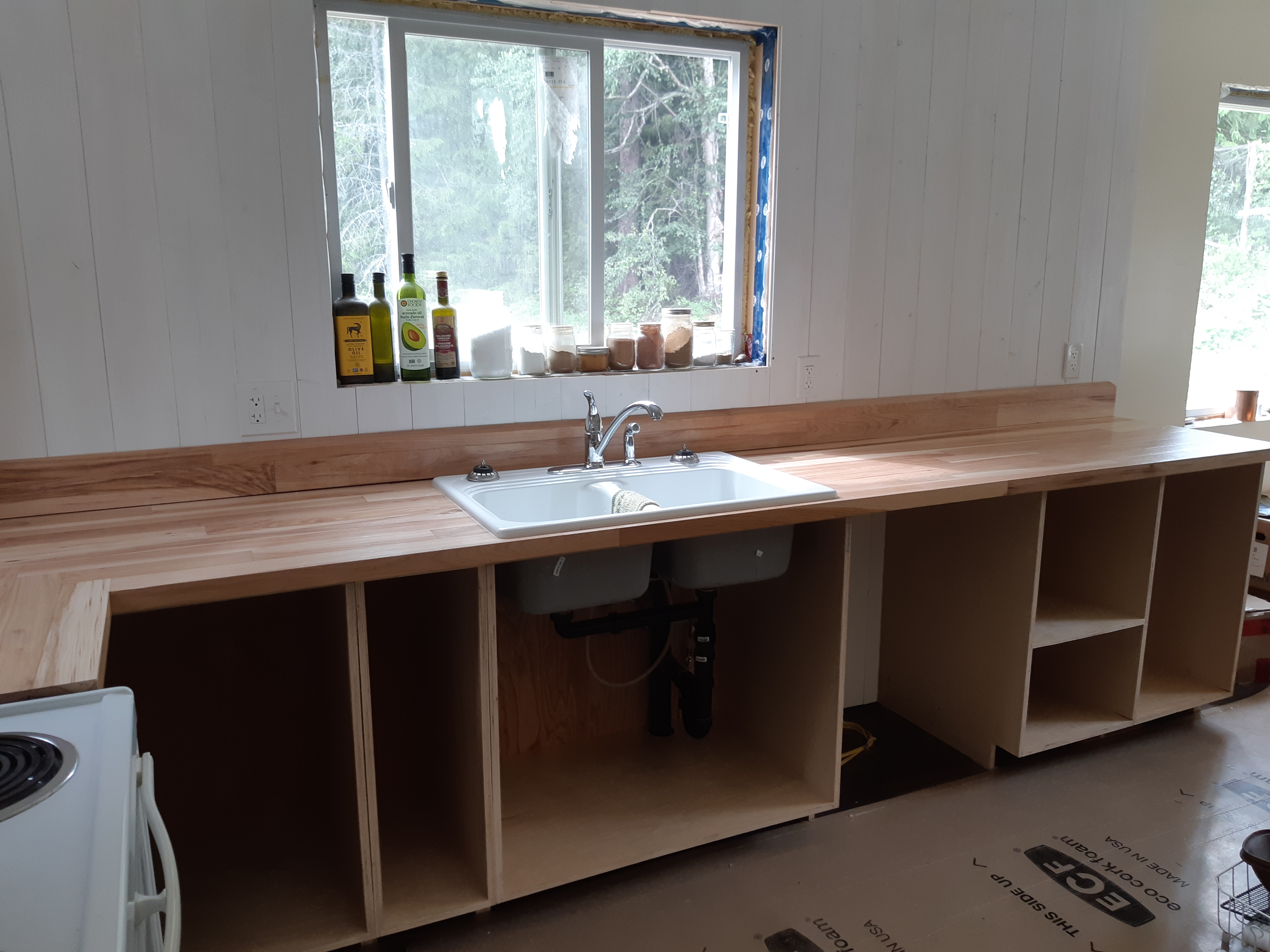 From the beginning, my man and I knew that our kitchen counters were going to be hardwood. We entertained a few different ideas, but finally decided to use 3 inch, tongue-and-groove hickory flooring. Because who doesn’t love the look of hickory?!

Neither of us had ever tried converting wood flooring to a smooth, counter surface. Let’s just say it was a learning curve! And that living without internet can be a serious disadvantage at times!

Like most hardwood flooring, ours had slightly beveled edges. Somehow, we had to get rid of them. No one wants cracks in their counters where flour, water and who-knows-what-else can get stuck. Right?

At the local home builder’s supply, we were advised to just give it several coats of Varathane. That ought to fill in the cracks! So we did. Three coats later, we realized it just wasn’t going to work. 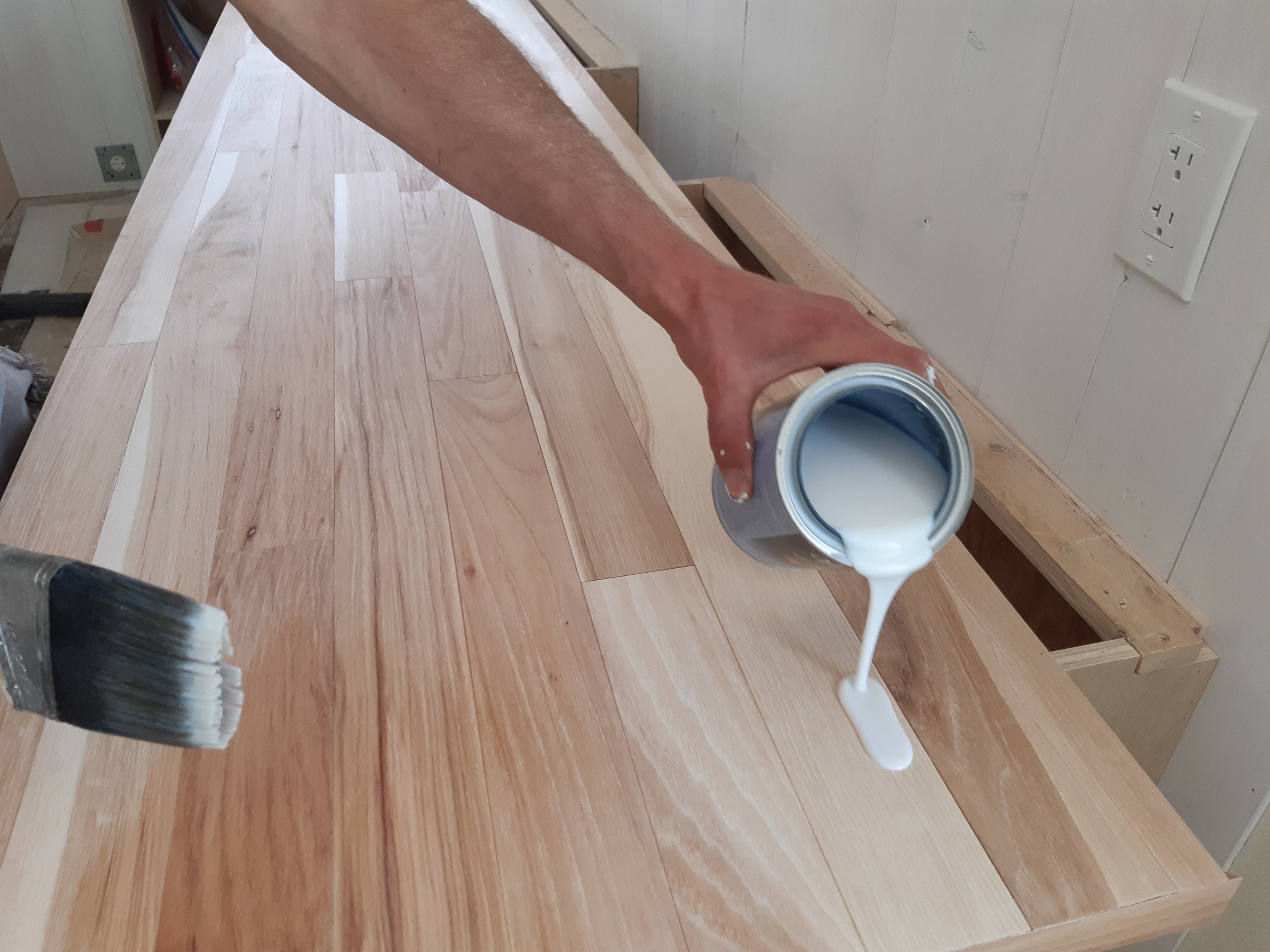 My man tried sealing the tiny cracks with a waterproof glue. Better, but still not satisfactory.

Finally, we decided to sand the entire thing down. After renting a floor sander (that didn’t work), we tackled the countertops with my man’s hand-held belt sander. 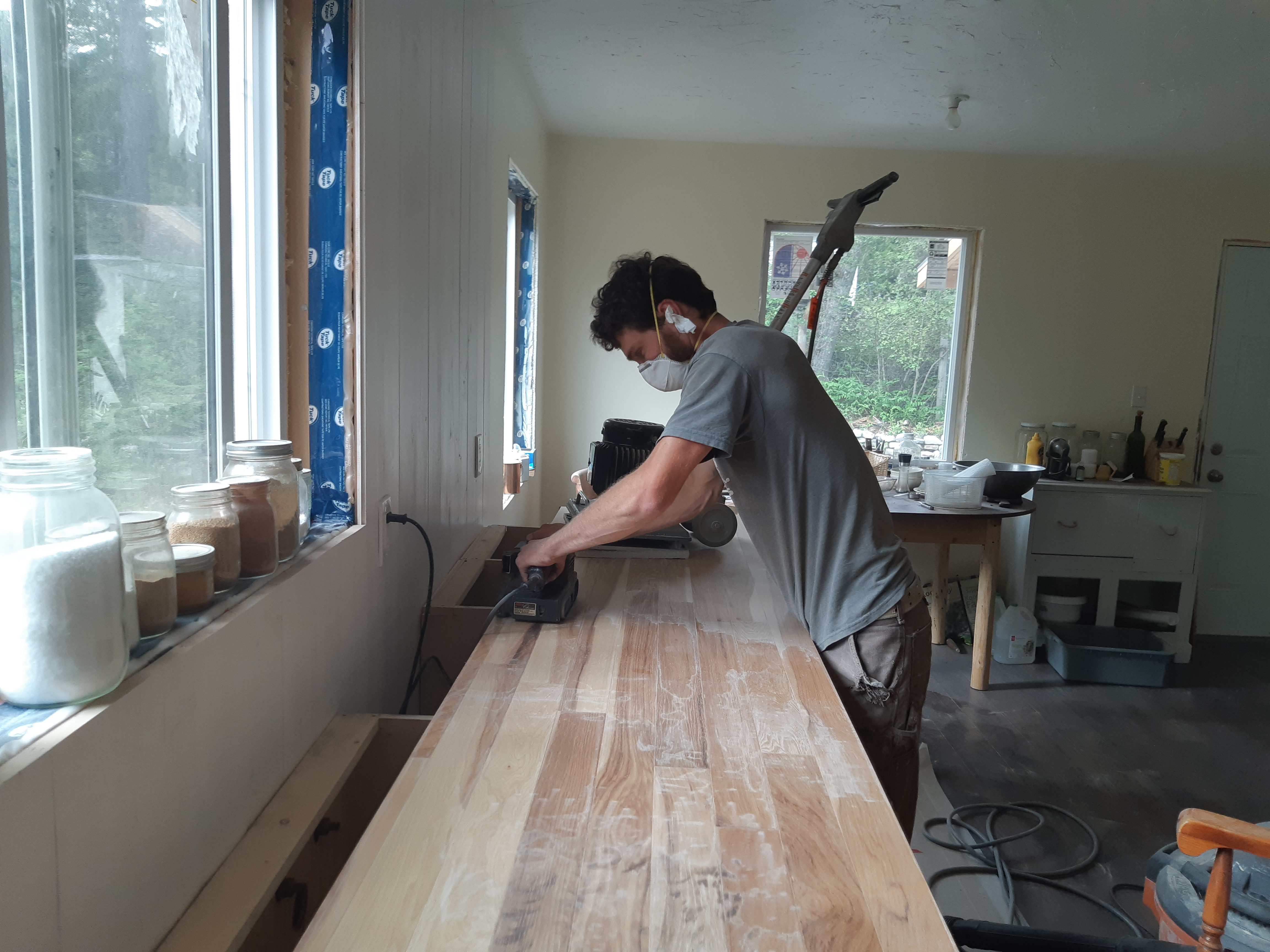 It took both time and elbow grease, but it worked! A good sanding, a few coats of Varathane and we were in business!

Was it really coming together?

I’ve tried to be impartial when designing, building and finishing our home. Really! But I did so want a white kitchen sink! My walls are white. The stove and hood range vent are white. A white sink would tie in so well!

After looking into the cost of farmhouse sinks, I knew it was a no go. We might have access to lots of money via a mortgage, but we’re still trying to make wise decisions! I had all but settled for stainless steel when I discovered a fiberglass option on the Home Depot website. And not just white: I found one with a wide flange on the back!

A sink that wouldn’t allow water to puddle up on the counter behind it?! Yes please? My man gave me the go ahead, I placed my order and he put it the day after our hickory countertops were done.

It’s wonderful, being married to a handy man! He build the cabinet boxes, created the countertops, installed the sink, ran the plumbing and then added a salvaged kitchen faucet to finish off the deal! What a guy! 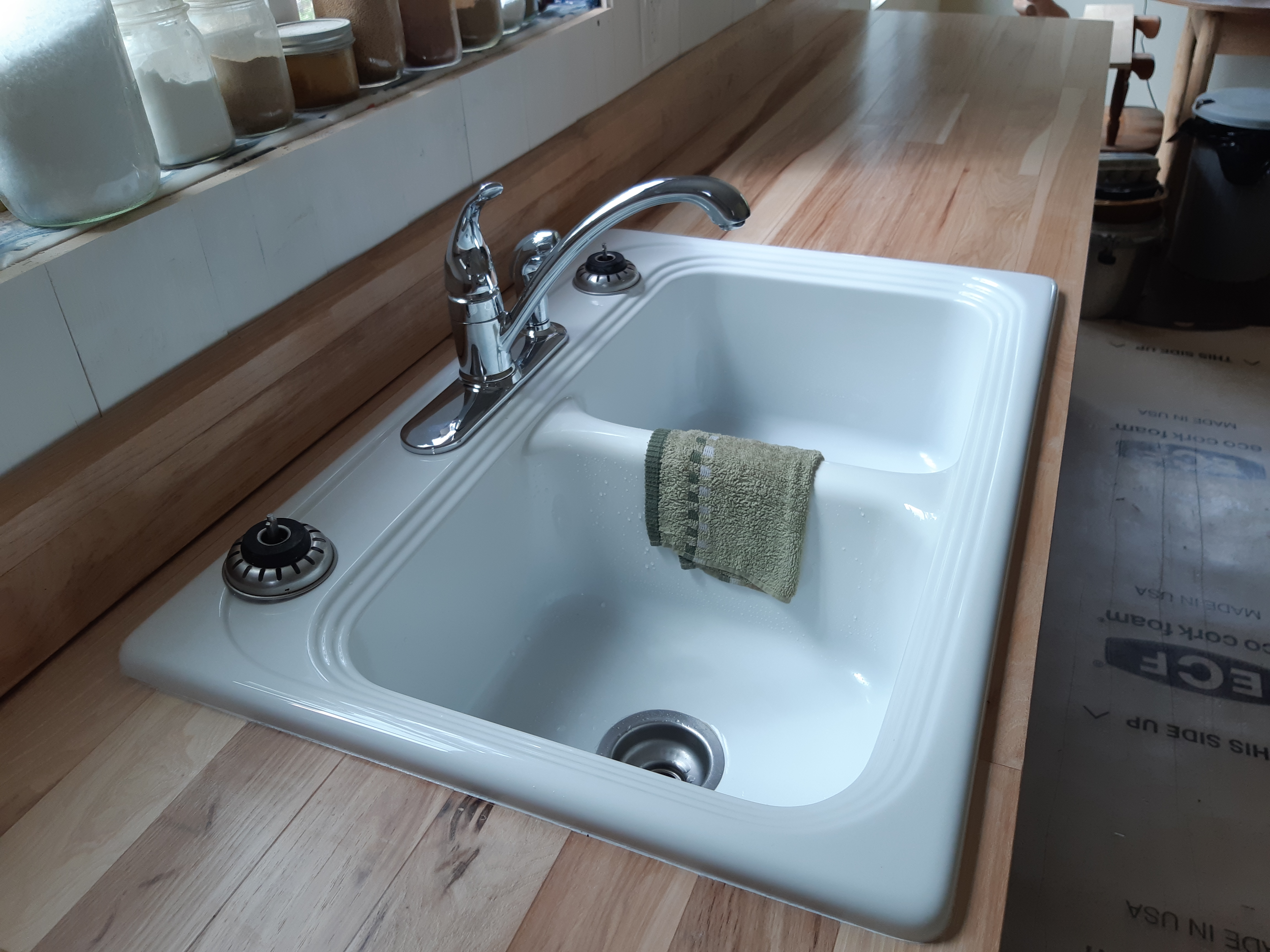 I’m still not accustomed to the running water in my kitchen. As I was wiping the wood dust from the counters, I kept running to the bathroom to rinse my dusting rag!

How long has it been? Half a year at least! Is it possible I’ll ever again complain about washing dishes? I know. It will happen. But right now it feels like such a luxury, I can hardly believe that time will ever come! 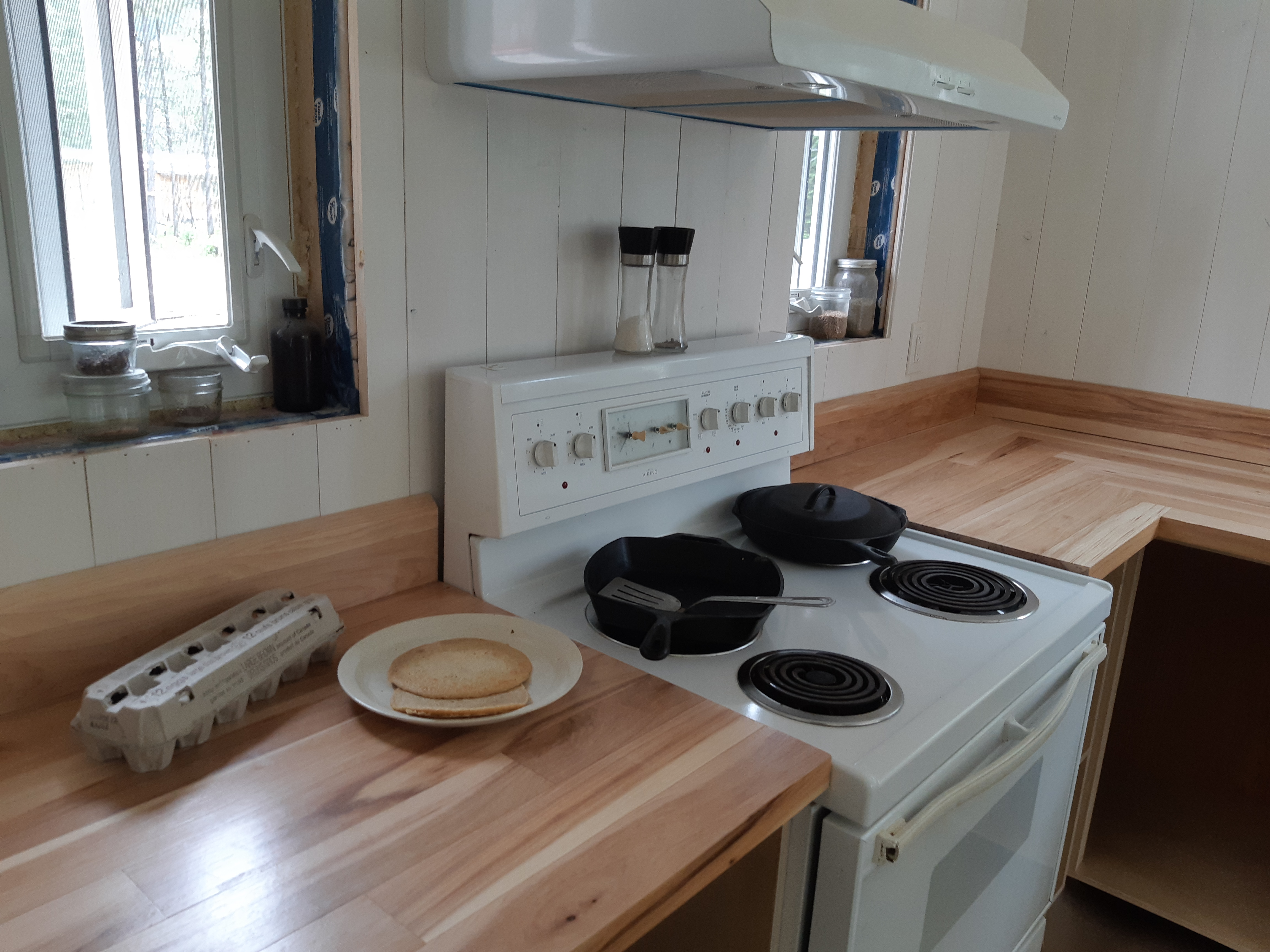 My Kitchen Is Functional

My kitchen is functional. Sometimes I still can’t believe it’s for real. But then walking in and seeing a pile of dirty dishes brings me back down to earth. Haven’t done them in 4? 5? days! I was waiting for the sink.

So now that I’ve told you all about my kitchen, if you’ll excuse me, I’ll just go wash them while my man and I discuss the design we’re implementing for our open, overhead kitchen shelving!