I was raised at a time when general society was clearing natural fats and oils out of their diet and out of their homes. We were told it would lead to heart disease and clogged arteries, that consuming fatty foods would put our health at risk. I clearly remember the surge of low-fat cookbooks and low-fat diets that flooded our world at that time!

How the tide has turned! Today, studies are showing that unadulterated, unprocessed fats and oils actually nourish and feed the human body. Don’t take my word for it (please, no!). But do take time to browse this article if you find the thought of using fat in the kitchen, concerning!

As for me and my household? We eat fat and enjoy it too! But we don’t just consume it. Lard can be used in many ways.

Do you wanna learn how to render lard in the oven? Good! Let’s do it!

Let’s be straightforward about this, shall we? Lard is pig fat. Pure, white, glorious pig insulation, not to be confused with beef fat (tallow)! The fat of a pasture raised pig has good things to offer the human body (vitamin D, anyone?) and if you wanna delve into the details of lard, take time to read this article!

So what are the primary uses for lard?

What Is Lard Good For?

Lard is particularly suitable for frying eggs, potatoes and meat. Just be sure to keep the lard’s temperature below the smoking point. Burnt fat isn’t good for anyone!

Does your family enjoy savory meat pie or chicken and dumplings? Use lard in the crust! Do you cook with cast iron? Season it with lard! Make soap? Use lard as one of the ingredients! Need a skin moisturizer? Don’t. But know something? Longer ago, folks certainly did use it as such!

Lard has many uses in the kitchen. And if you can source it for free, it’s a great way to save money!

Where to Find Lard When You Don’t Raise Pigs

How does a person get their hands on pig fat when they don’t raise pigs? It’s an excellent question! Here are two ways we’ve sourced it in our area. Hint: it’s best to try in late fall when animals are being butchered.

Talk To Someone Who Does Raise Pigs

If you know someone who raises pigs, let them know you are looking for pig fat! Offer to buy the excess fat, or do some old fashioned bartering and trading. Many people are happy to find someone who will use it. This is how we (usually) source pig fat.

Check With Your Local Butcher

Sometimes local butchers are willing to let go of excess fat at low prices or sometimes, for free. Check around. Make a few phone calls or write a few emails. You might be surprised by what you find!

How to Render Lard in the Oven

A person can render lard many different ways: over a wood stove, on the stovetop, in a crockpot or the oven. This girl likes doing it in the oven. Let me show you how!

Cut the Fat Into Smaller Pieces 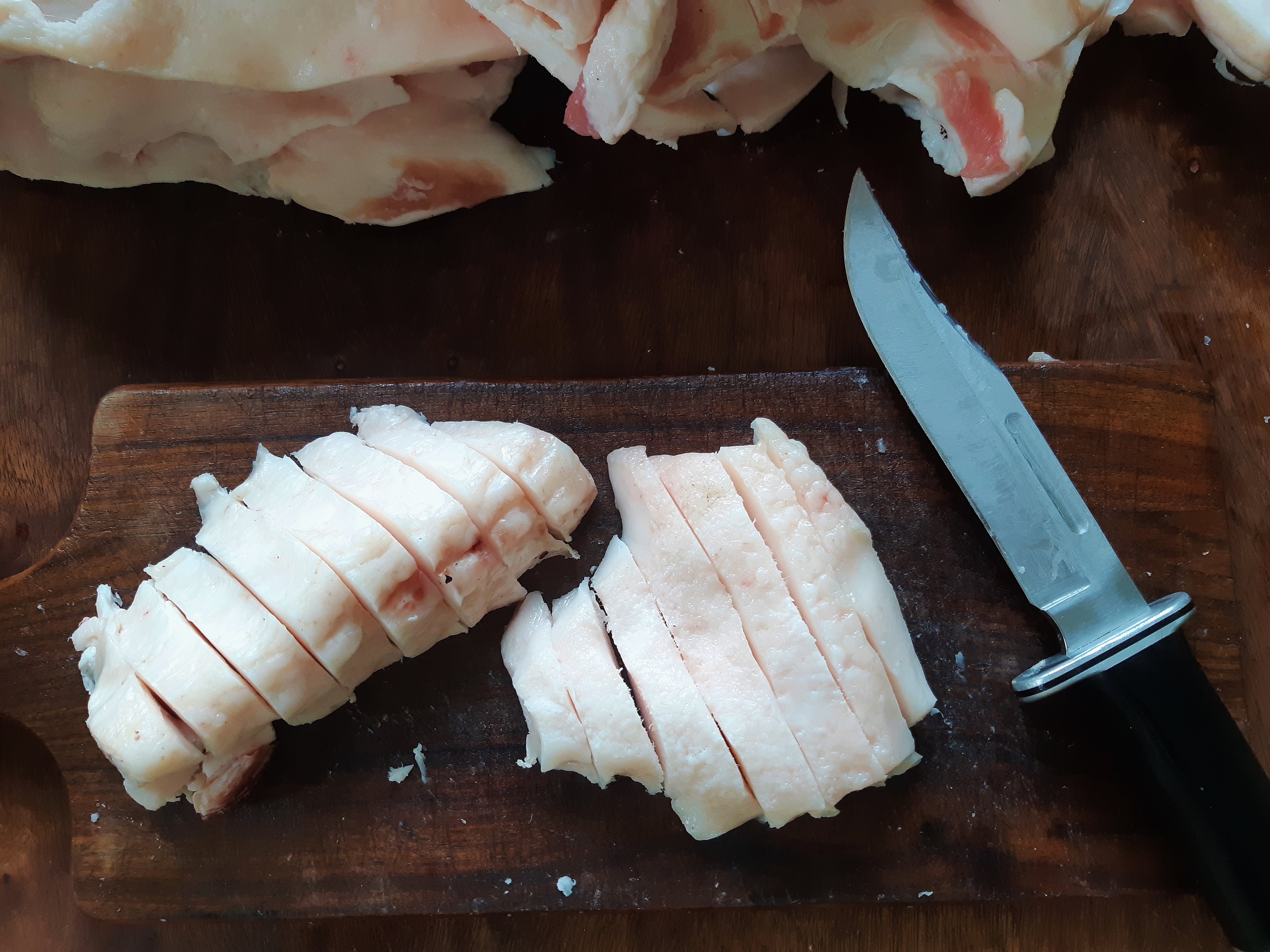 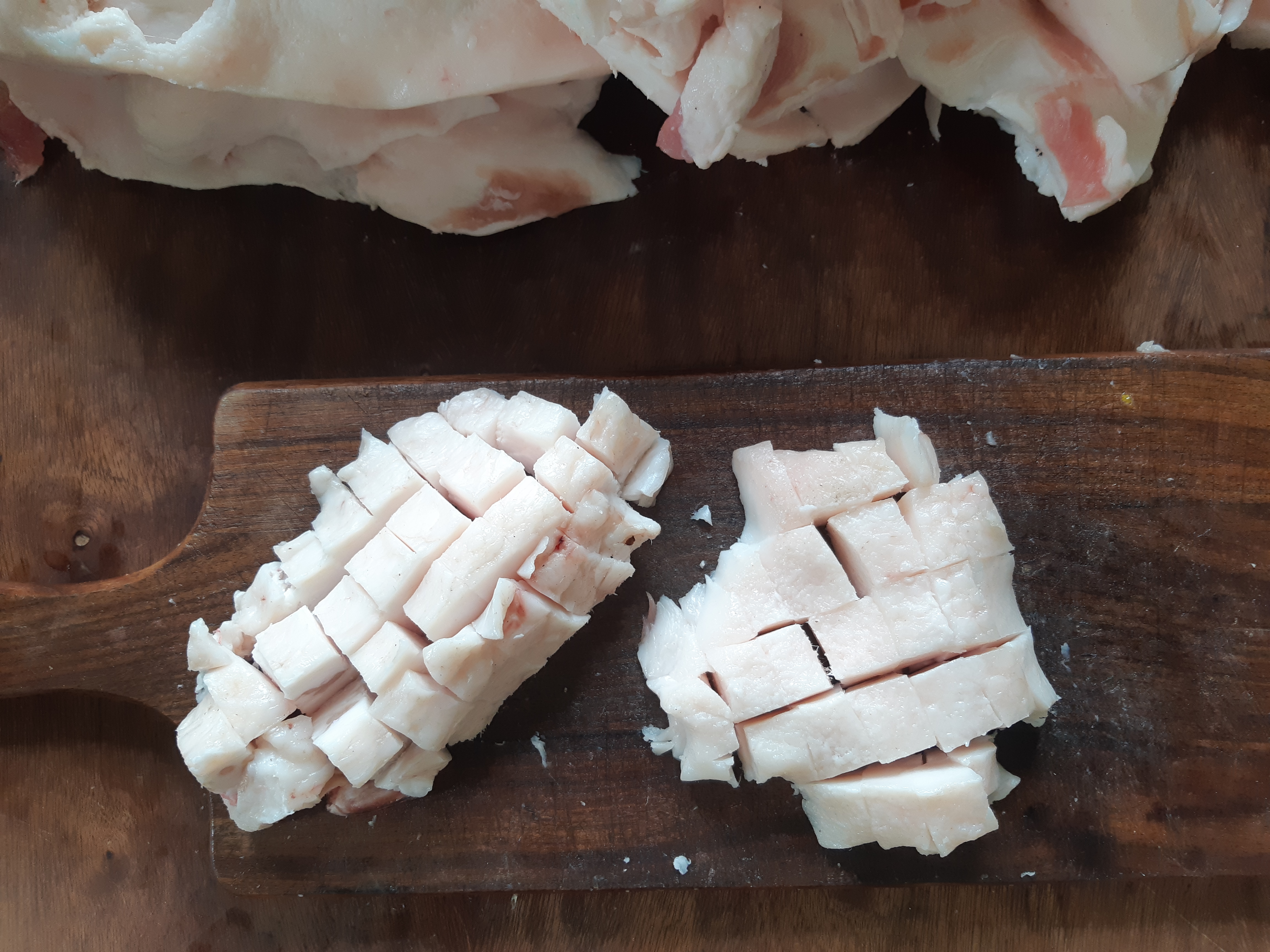 As you cut fat down to size, toss it into an oven-safe dish. I use my turkey roaster for rendering lard. But you can use a dutch oven, a casserole dish or anything you’d baked food in. 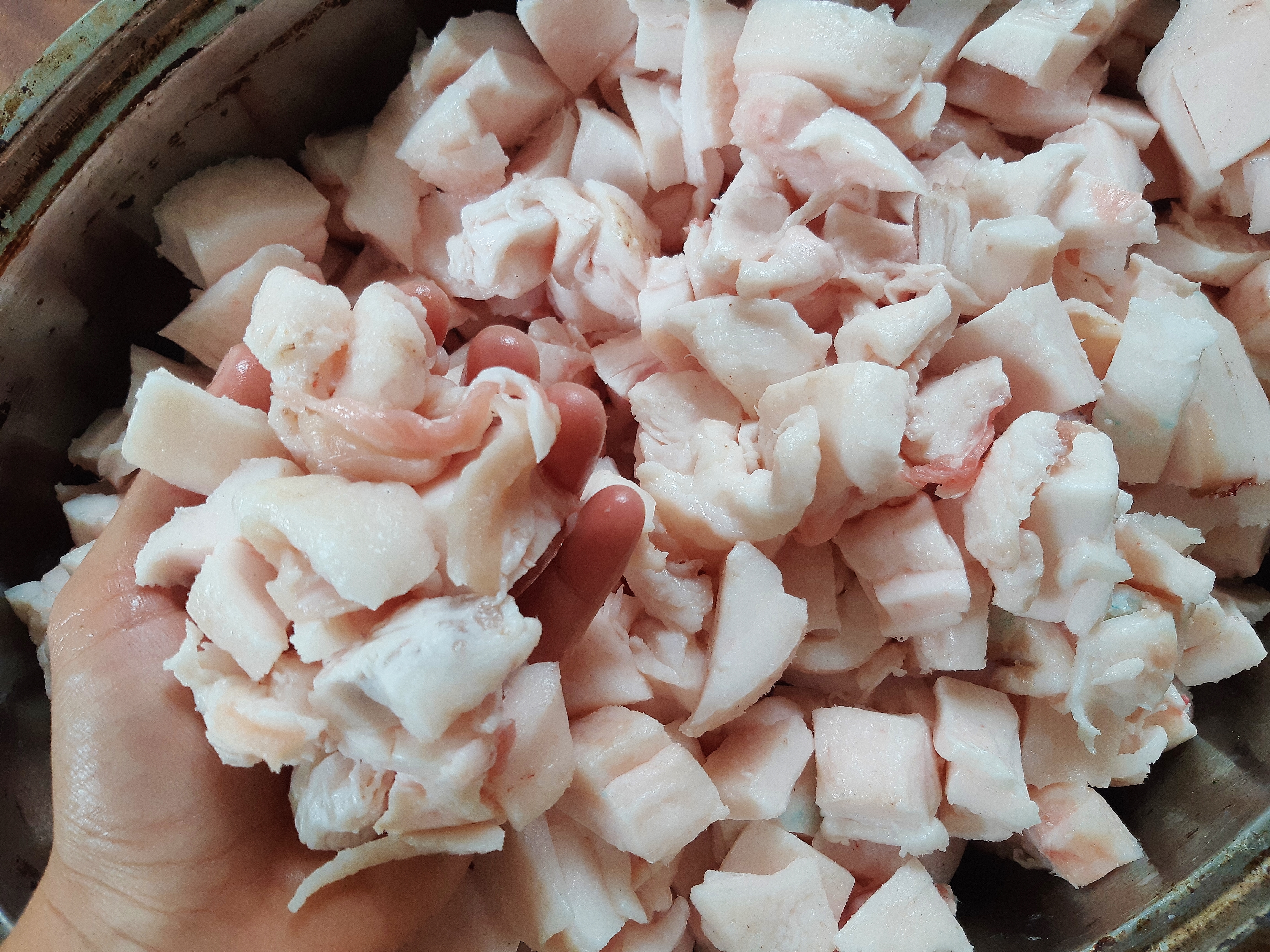 When your oven-safe dish is full, pop it into the oven without a lid. Temperature should be set for 350F. Stir every 45 minutes or so with a wooden spoon. 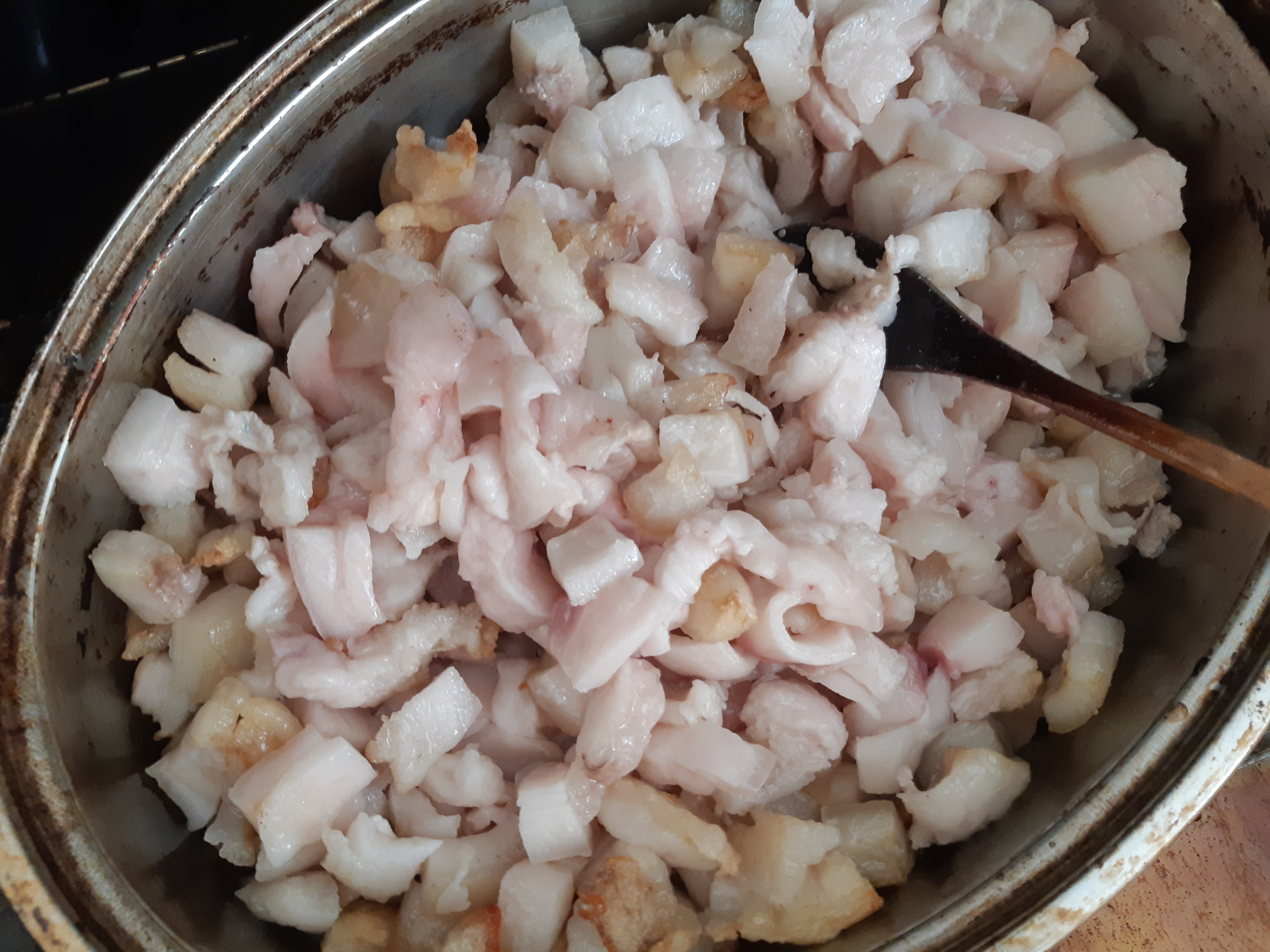 This process will take 2-4 hours to complete. Initially, the fat will have a translucent appearance which will slowly change over time. Bits in the pan (called cracklings) will brown and look as if they’ve been deep fried. When they do, it’s time to pull your lard out of the oven. 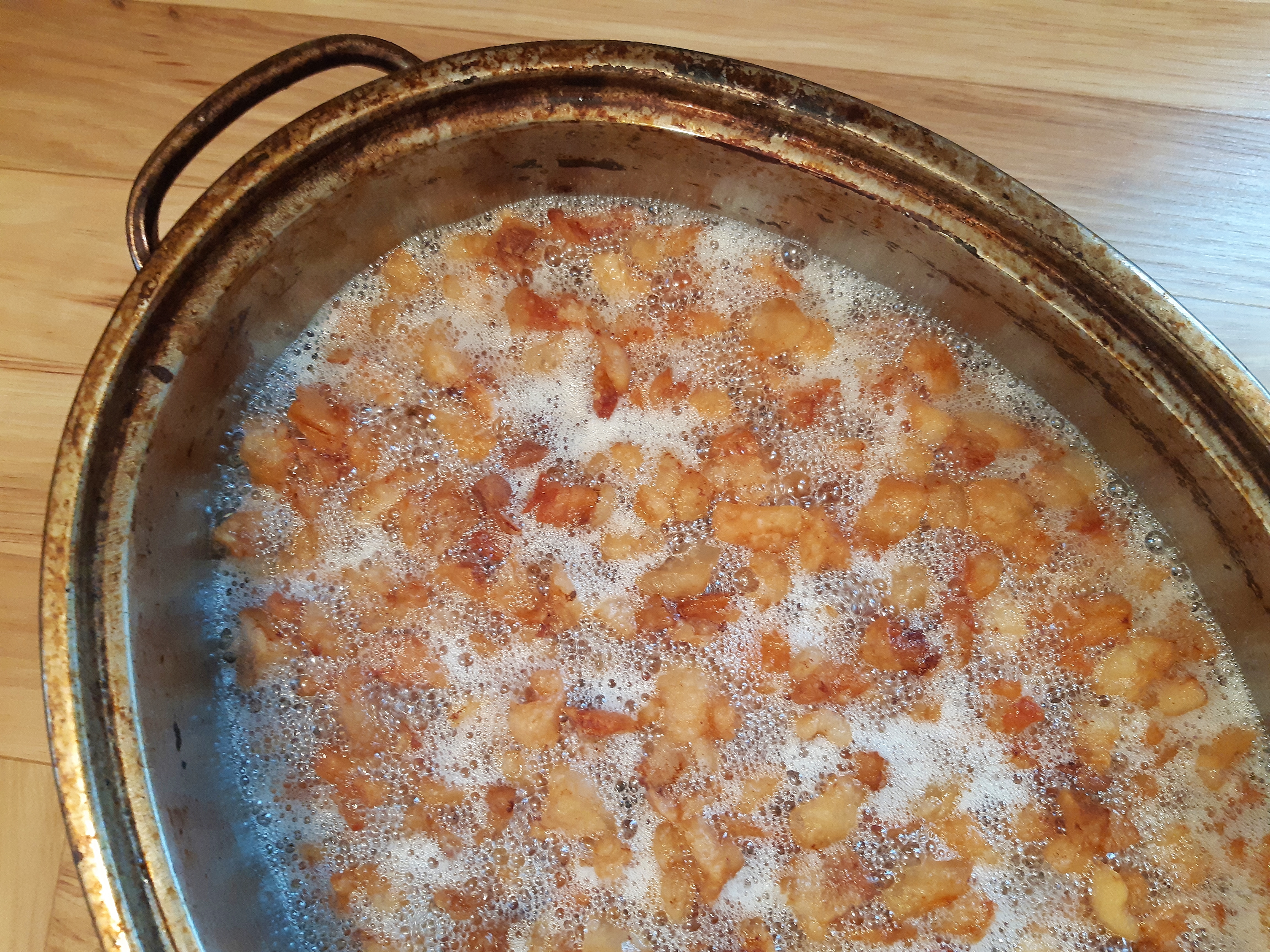 Let the scalding hot fat cool on the stovetop for an hour or two before you attempt to pour it into containers. This is one substance you don’t want to spill when it’s fresh out of the oven!

Strain Out the Solids

After the lard has cooled a bit, line a large bowl with a cotton straining cloth (if you need one, you can get a package here). Pour everything into the bowl then gather up the 4 corners of your cloth, lifting the solids out. 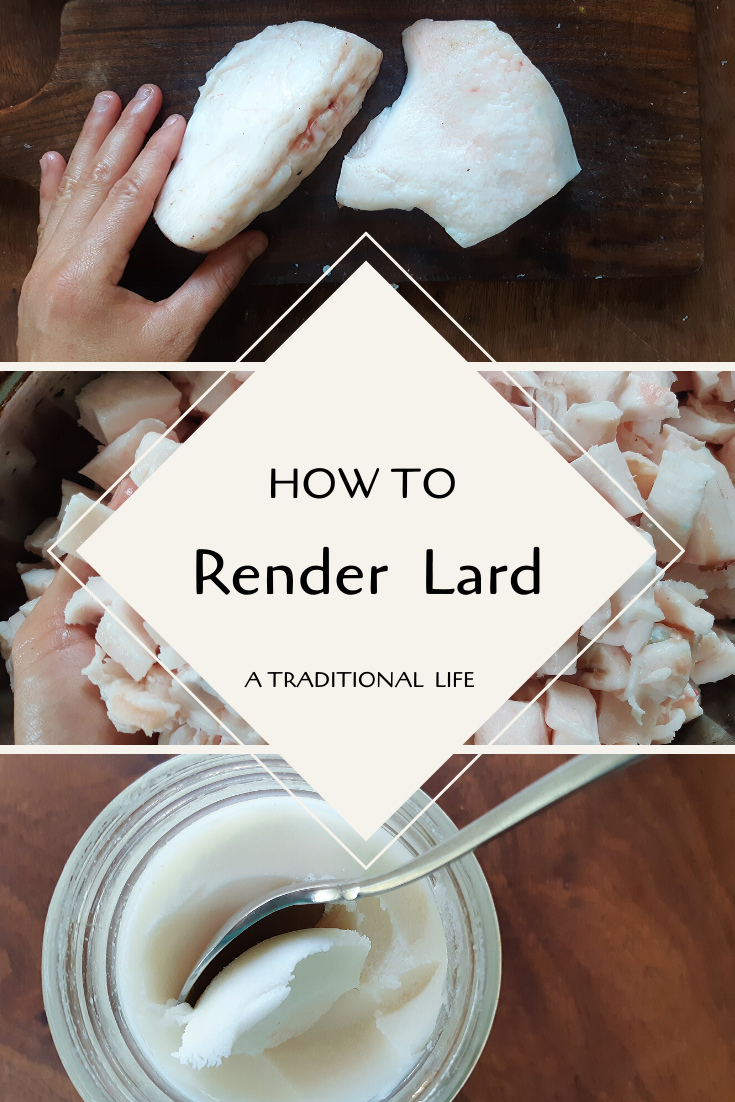 Clean, dry and set your lard containers out on the counter. I recommend placing a baking tray underneath them, just in case there’s a spillover!

You can use old yogurt or tupperware containers for storing your lard. Or glass jars (my preference).

Note on glass jars: always preheat jars before pouring hot liquid into them. I like to flip the jars upside down in the sink and run hot water over them for 15 seconds. Why not fill the jars with water? If you’re freezing the lard, you can. But if you want to keep a large amount out at room temperature, avoid getting water in your jars. It may lead to mold down the road.

Once the containers are ready, pour liquid lard into each one. You might want to use a funnel for this task.

Leave lids off of your containers until the lard cools and sets up. You know it’s ready when the golden liquid solidifies and turns snow white. Seal with lids. You can leave one container by the stove. Put the others into the freezer, refrigerator or into cold storage. 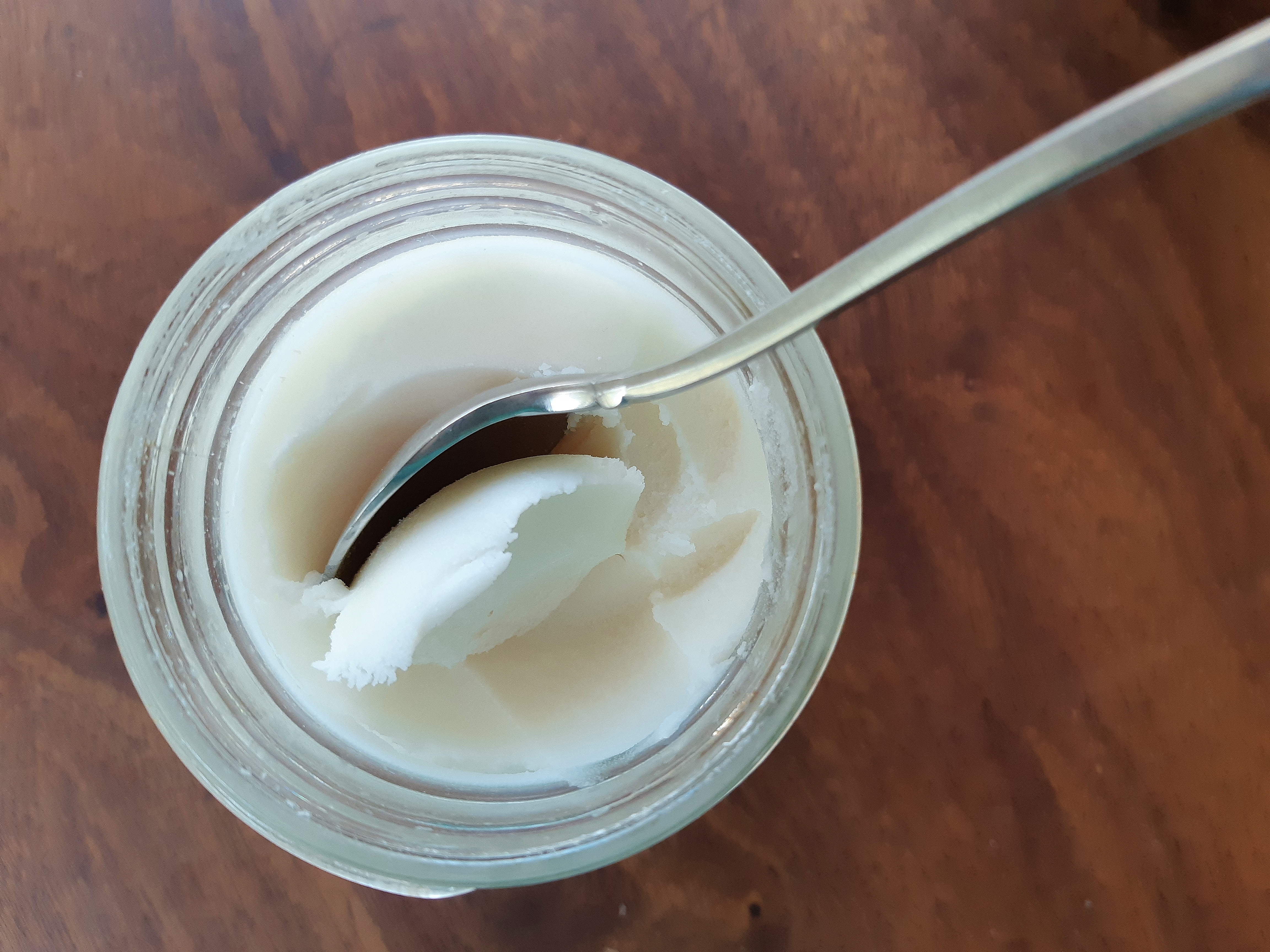 Now You Know How to Render Lard in the Oven

It’s there for you, anytime you need it! For soap making, when your cast iron needs re-seasoning, if you’re frying eggs for breakfast or making savory pastries, enjoy that snow white lard. And think of me. 🙂

Previous Post: « A Walk Through My Freezer Room
Next Post: The Day We Took Old Laying Hens »