Have you ever been surprised by the things your man brings home? I’m not talking about flowers, chocolate or a thoughtful gift for you. I’m talking about…well…man treasure? Something he’s going to use some day, something he has brilliant plans for, something that then sits on your yard as if it’s part of the natural landscape?

Know what I’m talking about?

A year or two before we moved out of town, I stepped outside the back door of our home just in time to see my man lugging a big, blue bathtub onto our yard. Blue, mind you! Folks, it wasn’t just an ordinary bathtub! It was a huge, tub/shower unit that came in one solid piece. 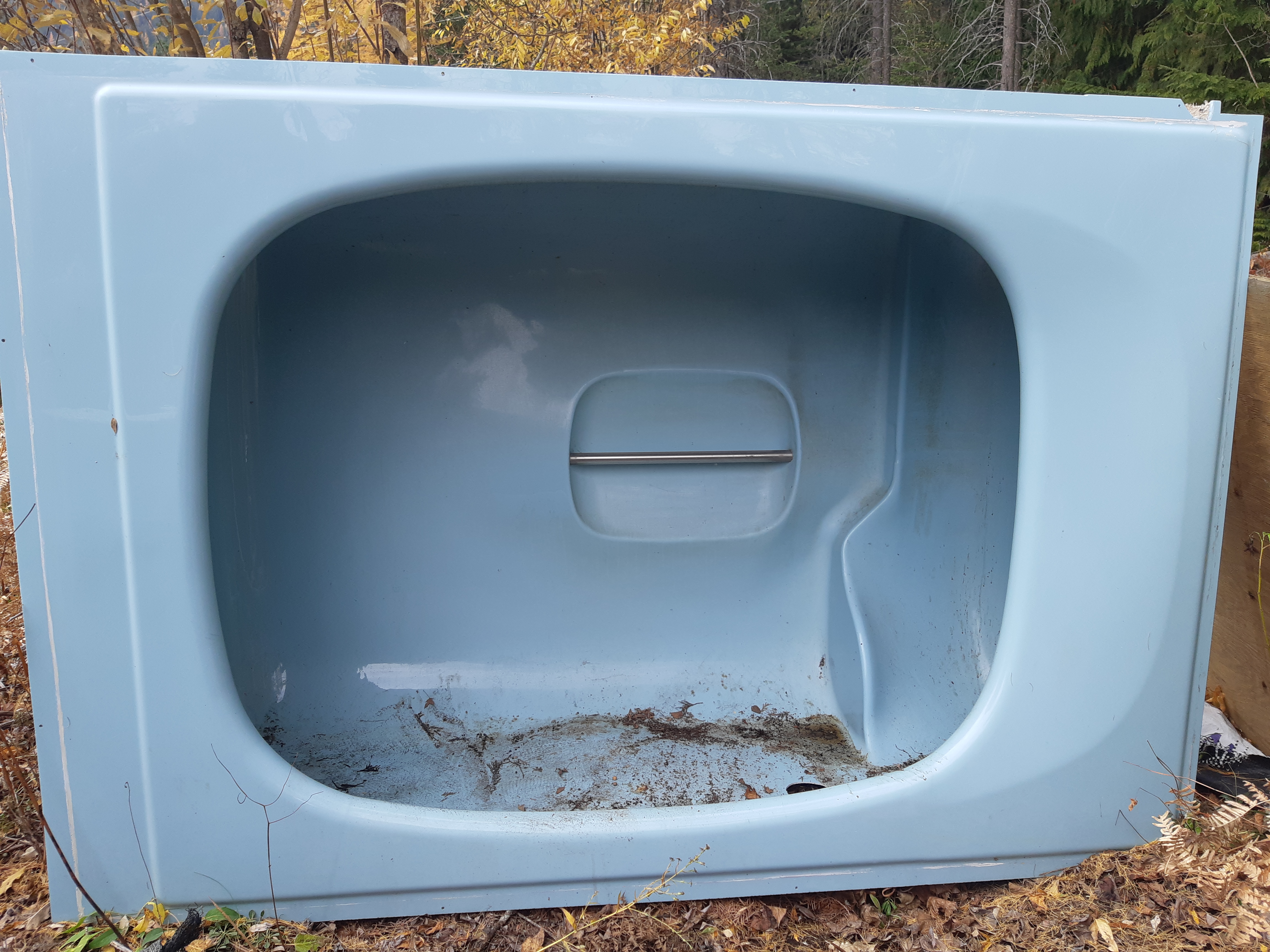 Blue as the sky and round as a bowl! I’d never seen such before and stared at it for a moment, my jaw hanging. What in creation?

And then, horror sunk into my soul:“surely he isn’t planning to put THAT THING in the home we’re going to build?!” At the time we were making a point of collecting a few items for the Mountain Cottage. Flooring, windows and now…this?!

I confess my wheels were spinning. How could I keep an open mind and still tell him I didn’t want a sky-blue bathtub in our bathroom?

There are moments when I’m deeply grateful we have an open, honest relationship. This was one of them! When I haltingly told him I wasn’t sure about putting it in our home, he informed me this blue monster-I mean treasure-was going to be his one-day hot tub!

I then heard all about how he was going to set it up, his plan for heating the water, about copper pipes and how a natural thermal feed works. The man had it all figured out!

Shortly after, we went in to supper. Life carried on. And the blue beast sat.

It sat up against the hedgerow, directly outside the kitchen window where I could feast my eye’s upon it’s blueness every time I worked at the sink!

Leaning on it’s side, the tub collected grass when we mowed. Summer dust accumulated in the bottom. Rain fell and created a puddle. Maple leaves drifted down from the trees overhead and like an open mouth, the blue beast managed to catch a good number of them.

While it sat, my man and I were busy. We were in the process of buying land, but kept facing delays. When everything finally went through, my man began sorting our belongings, hauling garbage to the dump and started moving large items up to the Mountain Farmstead.

In my heart, I was begging and pleading with him: “honey, please don’t bring the big blue bathtub!” The longer it sat, the more hopeful I became, until I was certain he’d given up on the hot tub idea.

And then one day, it was gone!

Had he hauled it to the dump? A neighbor’s place where it would be used as a livestock trough? Maybe some hobby farmer wanted it for a duck pond?

I soon discovered my man not only hauled it up to our property, but he put it right where I had to look at it…every time I worked at the kitchen sink!

Sigh. I don’t doubt he will make a hot tub with it, one day. But considering it might be 2 or 3 or 10 years from now, I may ask him to haul it somewhere else. Like behind the Mountain Cottage, so I can stare at it from the bedroom window! 😉

Has your man ever collected “man treasure” before?