In the lull of our second winter in the south, we decided we were going to build our own house. It was the only way to ensure we had a mold-free home! After talking, sketching and bouncing ideas around, we decided to build a very simple, one story home. We didn’t need something fancy; just a dwelling that was clean, something we could live in that aligned with our food raising, food preserving activities.

A basic cottage design bloomed under our hands that winter. Lucky for us, my man was also finishing carpentry schooling in that time. Because of this, building codes were fresh in his mind! And when spring came, we had something we were both happy with. 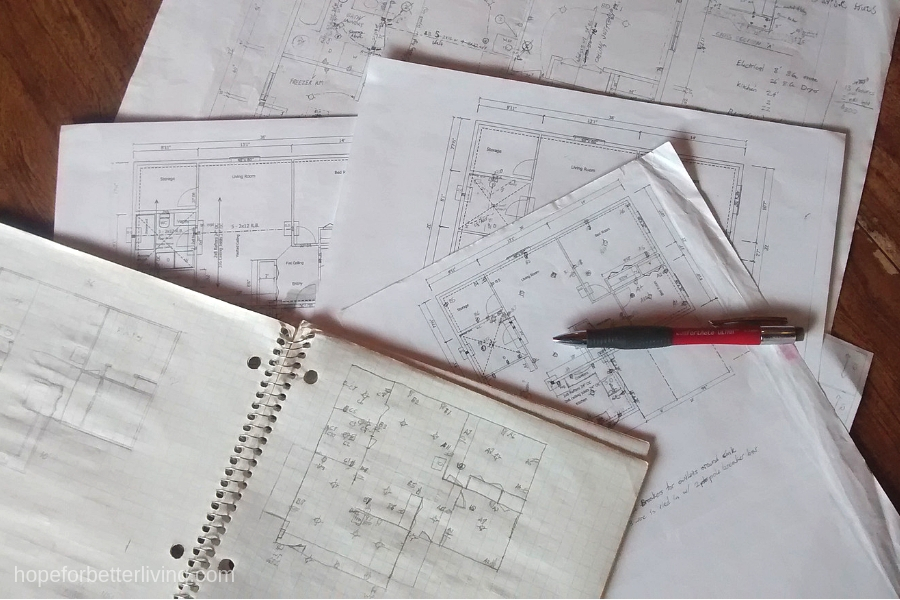 People had warned us that house planning might be rough on our marriage. It wasn’t! In fact, it had the opposite effect. There’s something special about working alongside your spouse to reach a big goal. It deepened our bond.

Perhaps it was easier for us, because we knew there wasn’t much money available? Maybe its because we saw the house as a means to an end? Our focus wasn’t on the home. It was simply one more thing that needed to happen before we could start a family!

With our cottage design laid out, we were ready to start searching for land!

The Beginning of Our Land Search

Early that spring, we visited the bank. As first time home owners, we wanted a mortgage for land and a house build. Our financial officer gave us the scoop. In order to avoid a very sticky mortgage insurance company, we needed a large down payment… 25% of the total mortgage itself.

Whew!  Talk about raising the bar! Land in south western Canada isn’t cheap, but we were determined to go all the way.

Shortly after we put our name on a local realtor’s list. Our savings account wasn’t yet where it ought to be, but we were going to keep our eyes open! You never knew when a great deal might pop up!

That was a season of excitement and anticipation. Every evening when he came home from work, my man would check his email. While I put supper on the table, he would read out the most recent appearances on the market. We’d often pull up Google Earth and examine the land from above. Sometimes, we’d jump in the van after dinner and drive by the places that interested us. It was loads of fun, that season!

We were looking for a 2-3 acre piece of raw land. Enough for a small cottage, several gardens, an orchard, some poultry and a few small dairy and meat producing animals.

When it came to the land hunt, we didn’t rely solely on our realtor. In fact, we both thought a private land sale would be ideal, because it would allow us to bypass the realtor’s fees.

Sometimes we’d go driving after church on Sunday, looking for private sales. One day, we found something that caught our attention. The place was up a side valley, hidden in a grove of trees. It looked to be about an acre. 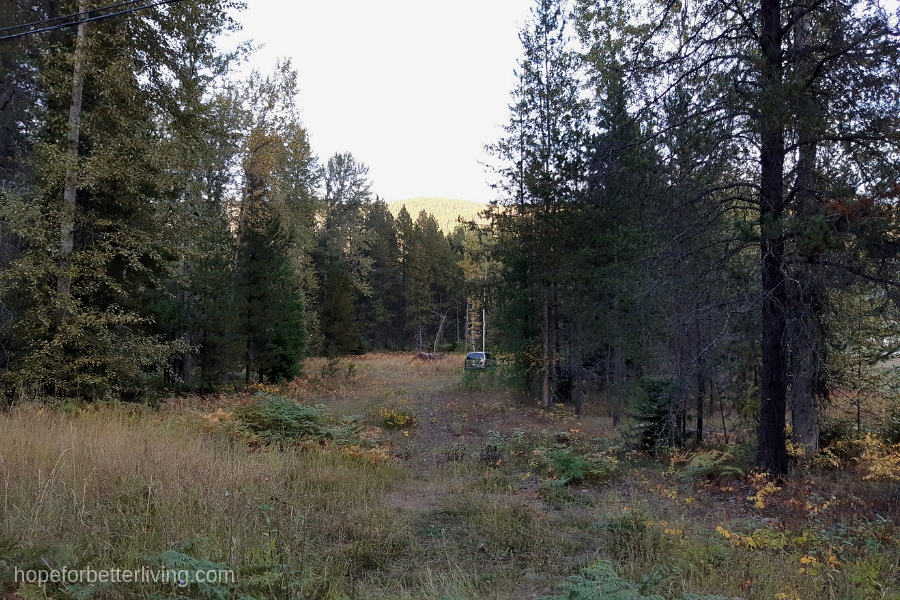 Our interest was only mildly raised. Thanks to our previous study, we were aware of what characterized this area: a shorter growing season, more snow, colder winter temperatures and rocky, mountain soil!

But beggars can’t be choosers. So we scratched down the number and carried on.

My man and I chewed on the idea for a while. Finally, we dialed the number and talked with the owner.

Unlike it appeared, the piece was actually 2.84 acres. The back half was forested.

When we asked for his price, it was just beyond what we could afford. But because it was so close, we asked to do a walk around with him.

The land was flat and usable, but it was rocky. Fallen pines revealed large stones tangled throughout their gnarled roots. Apart from a few inches of topsoil, the earth itself was composed of sand, gravel and rock.

We knew the foundation of any good farmstead is it’s soil. It would take back-breaking work, lots of time and money to transform those acres into the land we wanted! It could be done. But were we willing?

After thanking the owner, we placed it on the back burner and continued our search elsewhere.

Summer was full of the usual activities and one by one, the days went by. When late summer arrived, we still hadn’t found anything we loved. So finally, we decided to consider the mountainous place once again.

Sitting down, we made a list (what’s up with us and lists?!) of pros and cons. We were surprised to discover that it was well suited in every respect. Except for the soil.

Since coming to this valley, I’d been learning all I could about building good, rich soil so that our food would be as nutritious as possible. It was possible to build good soil, even on rocky land.

But were we willing take on that challenge? We needed an outside opinion.

So after walking over the property with a couple we trusted, we decided to consider it.

The Test of Silence

My man and I are cautious by nature. And when there’s a big decision to be made, we often run “the test of silence.” For one week, we don’t discuss the subject in question. Instead, we take that time to pray and think on the situation. After the week had passed, we share our thoughts.

We decided this was a big decision and it did deserve “the test of silence.”

That was a very long week! But by the end, I knew what I thought. And so did my man. But would our thoughts align? I felt nervous. What if his thought was the exact opposite of my thought? Then what would we do?!!

You can read part 6 to discover just what our conclusion was!