My man and I left friends, family and our familiar environment behind for the sake of pursuing a better life (catch part 1 here). We didn’t know what we were headed into, but we were on our way!

Anticipation was heightened as we drove down, down, down through the province. It was no short jaunt, but 1,200 km later, we arrived after dark, safe, sound and eager to learn all we could about life in the south!

I’ll never forget our first morning in the valley. The place was lush and green, so full of life!

Birds sang their morning song. Glimpses of rugged mountain peaks showed between the majestic evergreen trees. Wild roses grew in abundance along pastures edges and fences, their pink blossoms releasing a gentle fragrance, while wild pheasants moved cautiously through the small pasture out back. 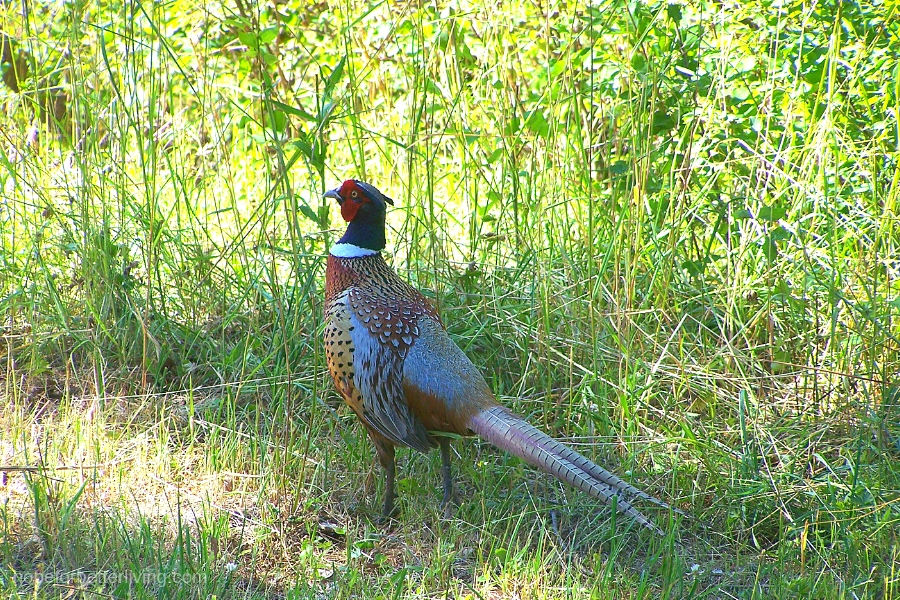 The farm itself was bustling with life, and I hungrily took it in. Grazing cows, clucking chickens, quirky ducks, full gardens, heavily laded fruit trees, plus strawberry and raspberry patches ready to be harvested!

After living on the northern prairies for too many years, I finally felt as if I could breathe again.

We were heartily welcomed to the farm by the current residents and my friend, who also lived in the community house.

Almost immediately, these folks took us to visit the food producing areas of their farm. We also talked over our living arrangement. Apart from paying a small, bus-rental fee, they also expected us to help with daily chores. And if we wanted to, we could pay another reasonable fee and benefit from the food their farm provided.

And so, we ate like farmers that first summer! Home-raised produce, farm fresh eggs, grass fed beef and loads of fruit. It was heavenly.

Living with a group of locals ended up being a wonderful way for my man and I to break into the community! And by helping care for the farm, we gained valuable insight into the particulars of raising food in the area.

We were determined to make good use of our one year trial, so we submerged ourselves in valley life. We fished lakes and explored mountain roads. We swam in rivers and hiked trails. There were people to meet, sports to play, a culture to learn about, a church to be part of and a valley to enjoy. Today, we still refer to this season in life as our second honeymoon. 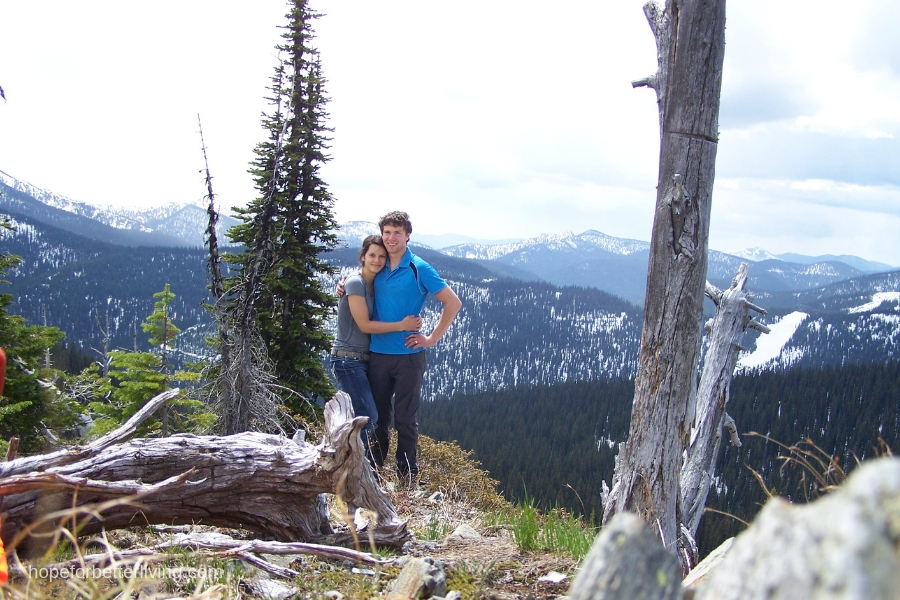 There were some good laughs shared in this time too!

While I grew up in the heart of fruit country, my man hadn’t been so lucky in his northern homeland. And now that fruit was all about us, he made up for his past deprivation!

If (I ought to say when) he went missing, I knew where to find him. Trotting outdoors, I’d head over to the chicken house. There I’d find him, perched on the roof, feasting on purple Italian plums that had tempted him beyond all resistance.

And if he wasn’t in the plum tree? I’d spot him in the neighbor’s cherry trees. Still other times, he’d be discovered in the strawberry or raspberry patch, making up for the past 25 years he’d missed out on!

Fortunately for me, the camperized school bus had very good air flow!

I don’t say this just because of my man! It was an unusually hot summer and nighttime breezes made the heat bearable in the old school bus.

Yes, there were surprises waiting for us, and not all of them were as easy to shrug off!

Shortly after arriving, my man discovered he actually wasn’t employed. And no explanation was given.

This put a slight damper on our enthusiasm. Financially, we had enough in our savings account to live the entire year without added income. But in our minds, that money was being saved for our (one day) farm!

We started praying for a job and a good rental home.

In the middle of that wonderful summer, there was another difficulty thrown in our pathway: an unexpected pregnancy. It sounds terrible to say, but I was devastated. In moving south, I finally had the opportunity to be treated at a center I’d wanted to attend for over a year. I was desperate to get my feet under me again, so hopeful for change! I even had an appointment set up!

But when we learned I was pregnant, it all crumbled under me. No treatment was allowed now! And because Lyme disease was uncontrolled in my body, the risk of transmitting it to the child was heightened, along with the possibility of serious complications.

I wrestled long and hard with God, myself and my fears. It was a dark time, but slowly, I found a sense of peace in the midst of my anxiety and accepted the fact, even began feeling excited at the thought of a new addition to our family.

And then a few weeks later, I miscarried. It was bittersweet. On one hand, I was relieved. And on the other? I had started embracing the reality of a child.

We were back to square one.

In spite of the difficulties that came, we still enjoyed that summer. We loved living on the farm and being part of it’s activities. But as time went on, our itch to find our own rental home became itchier. Even though we were in the south, neither of us were keen on snow camping in the school bus!

At this point, my man had found a job with a small construction company and was enjoying both his boss and the work. But very few rentals were appearing on the market. As the months slipped by, I began to grow nervous. What would we do if we couldn’t find a home that was both mold (and pet) free?

In the end, it was my friend who found our home. It belonged to a local, greenhouse owner. And the current residents were preparing to move out!

It was in the area we’d hoped for, with a tiny, shaded back yard. Out front was the blacktop parking lot of the greenhouse business. It was a large, rambling house with 6 bedrooms and a huge living room. It was far more than we needed!

But after our first viewing, we told the owner we’d take it. The place was heated with gas, rent was affordable and down below the greenhouses, there was space for a very large garden. There was even an outdoor kitchen for summer canning and a cold room in the basement!

It was well suited to our needs, so several weeks later, we settled in and challenged winter to fly at us now! Being accustomed to northern climates, we didn’t realize it was still three months off!

Embracing Life in Our New Home

While my man worked construction, I busied myself by filling the cold room as fast as I could! There wasn’t much that first year. But I was proud of it! 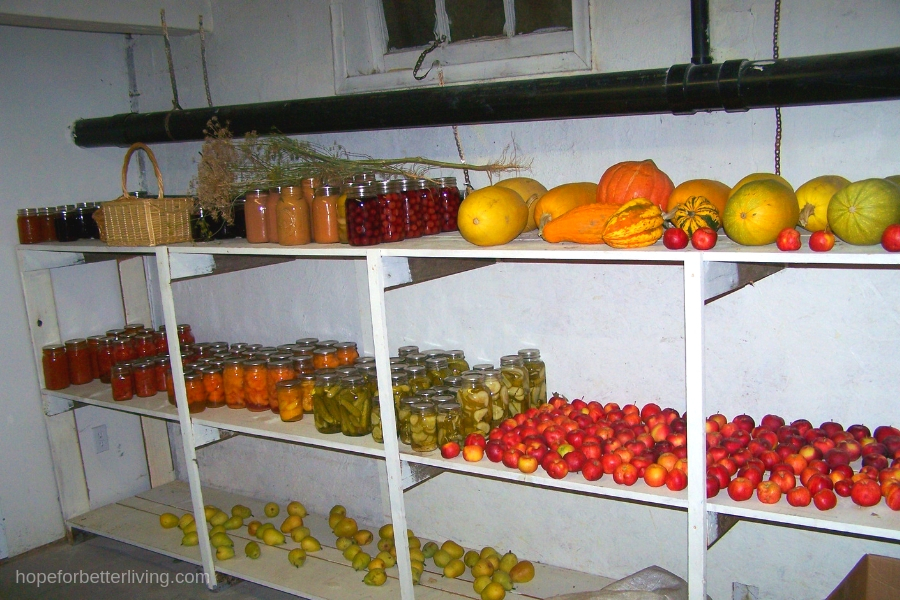 We’d brought down our small freezer. My man hunted that fall and was delighted to discover the deer were plentiful, that elk and black bear could be found.

I wasn’t afraid to glean, so I put the word out. Before frost fell, we had all we needed in the way of apples and pears.

Our landlord even gave us permission to raise a small flock of heritage turkeys down below the greenhouse business. This delighted my farm-girl heart! We were well cared for and ready for winter to descend.

As I look back at those first six months, I’m amazed at how people looked out for us. It seemed like someone always had our back. Always! Was it because we were trying to blaze our own trail? Or perhaps because we were eager to embrace the traditional lifestyle so many people here, loved? Perhaps they felt the need to reach out to us because we didn’t have family in the area?

Whatever the reason, we were grateful! And as winter gently settled over the land, we embraced it’s coming.

Previous Post: « 5 Reasons We’re Building A Small Home
Next Post: 8 Ways You Can Save Money In the Kitchen »