Does anyone else feel bad about throwing out canning lids every year?! Home canning is one of the primary ways I contribute to our savings, and a walk through my cold room after harvest gives me a feeling of satisfaction and accomplishment I rarely experience elsewhere!

In spite of my love for mason jars, I have one pet peeve with canning…canning lids to be specific. I decided I didn’t want to continue the buying-and-tossing pattern. It seems so wasteful, particularly when you put up hundreds of jars every year. 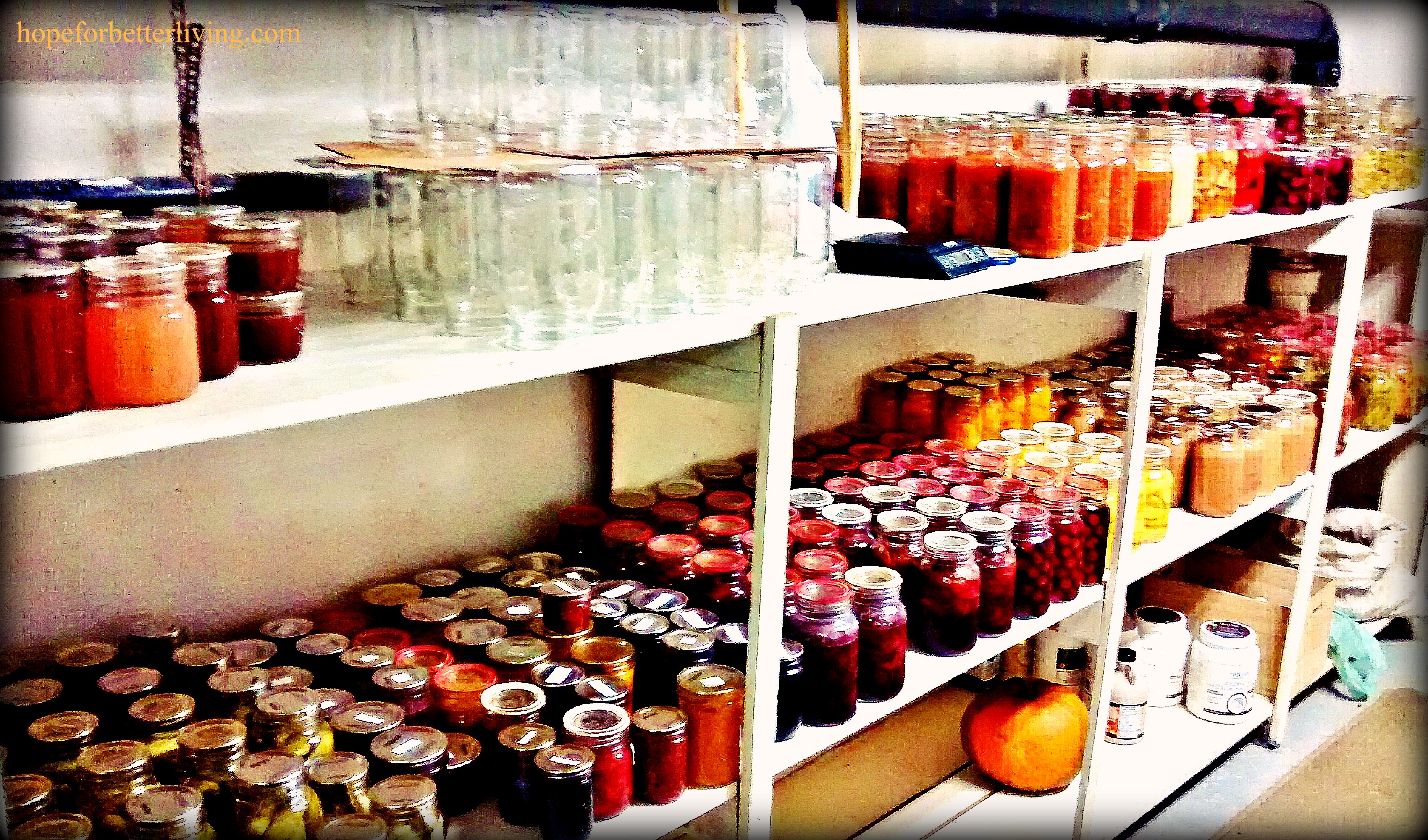 Since we went on a budget in late-summer, we’ve had to account for all our spendings. When I calculated the cost for canning, I was surprised to discover that we were paying over $0.25 per canning lid. Where I live in Canada, a box of 1 dozen standard lids sells for approx $3 (give or take with sales) at our local store. Wide mouth runs at $5 per dozen! Even if I processed all my food in standard-mouth jars, at 400 jars per year, I’m paying approximately $100 to do it? I had no idea!

Aside from costs, I decided it was time to change over to all glass. Not only would it last, help save a dollar or two in the long run, but it would also suit the vodka based tinctures and the ferments I make. No “stuff” dripping into my food, please and thanks!

I began researching and discovered the popular “Weck” brand. Using the glass lids when putting up acidic foods would ensure no ‘dripping’ happened. Pulling out the calculator, I began to work with the numbers. When I was through, I sat in numb amazement. Buying these jars would cost me (strictly purchase costs) over $1,400. No go! We couldn’t afford this, regardless of the benefits! Sighing, I tucked the idea away, out of mind. Back to tossing tin lids and $100 a year. It wasn’t so bad!

And then, it happened. I had a friend visiting at the time. If it wasn’t for her presence, I may never have learned and discovered the truth!

We have a great thrift shop in town and due to the farming history of our community, lots of old cooking and preserving supplies come through. While there with my friend, I saw three packs of old glass canning lids, some labeled “Gem” and some “Jewel.” Intrigued, I bought them for a mere $2 a pack, thinking I could re-sell later online for crafts, etc. 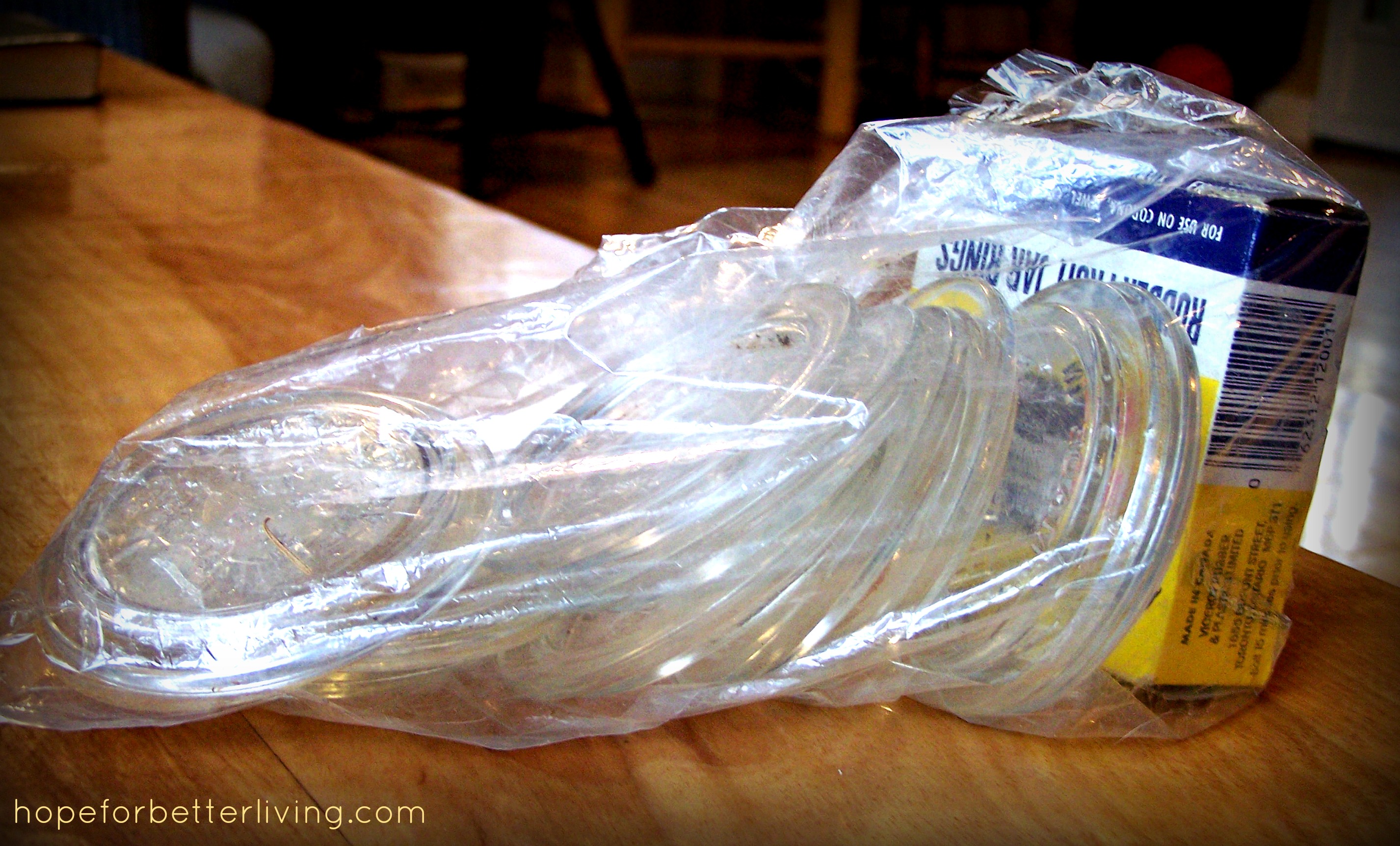 We made a bee-line for home and began the research. It was then that my friend told me her mom still canned with these exact glass lids. Strange, ’cause they were a different size than either the small or wide mouth jar. We put the pieces together and realized they fit the Canadian-made Gem and Jewel jar.

Suddenly, I became excited! While I had never seen glass lids, I knew about Gem and Jewel jars. They are old, but not so old. In fact, most Canadian women in their 50’s have used them. I had even used them. My husband’s aunt had given me some canning supplies and among them were jars with a strange-sized mouth and the unknown label of “Improved Gem.” Not large, not small, these jars fit a medium sized tin lid and metal band.

In fact, I had accidentally brought one with us when we moved. I left most of them behind because I didn’t want a third size of tin lid and canning ring kicking around.

Wait! What?!!! I quickly pulled out the one jar I had. Every lid fit it! Hopping online, I dug into the information and history surrounding these jars. Whew! Talk about amazing! 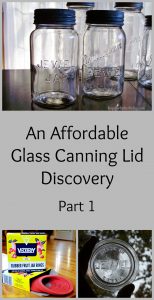 The Canadian homesteader’s life was tied up in them! First produced in the 1930’s on Imperial-based measurements, a glass jar, glass lid, rubber ring and thick metal band were presented to the Canadian housewife for purchase. They were accepted with open arms and quickly spread throughout the western Provinces. Many a woman overwintered her family from the goods within the Gem, Jewel, Corona and Crown labeled jars! 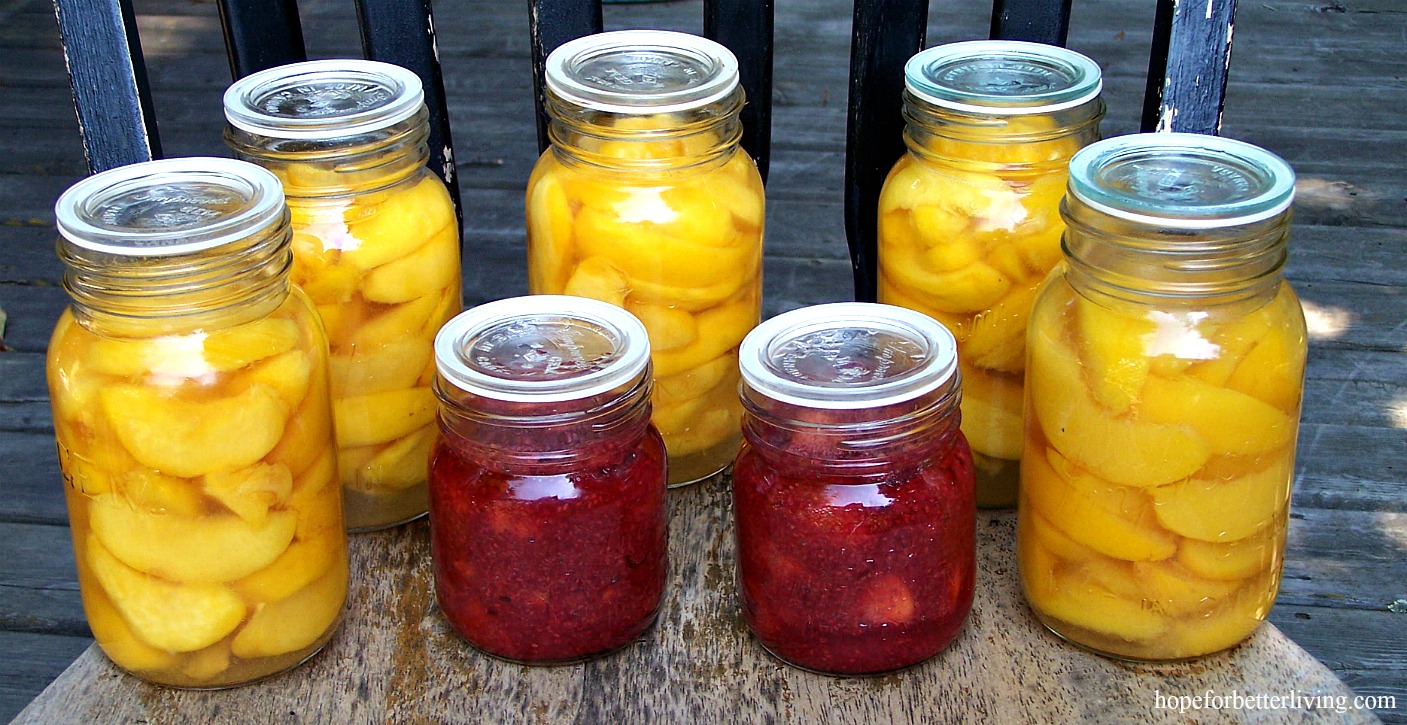 When tin lids came into production as a 2 part system, the old three-piece collections were replaced in most homes. Thus updated, the use of these jars carried on with the benefit of one less item to manage during busy canning days!

These jars were predominant among the people who lived off the land and passed their goods on to the next generation (farmers, homesteaders, Mennonites, Hutterites, etc). Some families had collections of over 1,000 of these jars. And they lived off the goods within.

And then, I read on. Production of the medium-mouthed jar ceased in year 2000. As they were no longer on the market, in 2002 the only company producing medium-sized tin lids (Bernardin) announced the discontinuation of them.

While Canadian’s are known for being polite and sweet, there isn’t anything polite or sweet about having your entire supply of over 1,000 canning jars go lidless, particularly when you overwinter your family from the goods inwith!!! The petitions and complaints went a long way (read about it in The Wall Street Journal ) and the voice of the homesteaders was heard! Their plea was met with action (read about that in CBC News Canada) and the American-based Bernardin company was moved to produce the 78 mm lid for one more year. Meanwhile the president of Canadian Home Canning Inc, set up and and put the lids back into steady and regular production (see story in The Western Producer). To this day, medium size tin lids and bands can be found on the grocery store shelves throughout the western provinces!

The story intrigued me! These jars were obviously vital to the survival of these northern homesteaders!

Being thoroughly excited at this point, I suddenly realized my dilemma: these homesteaders were using tin lids and I wanted to use glass lids! Where could I find medium-sized, thickly threaded, screw-on bands? What about the rubber rings? A collection would be useless without a seal! With a sinking heart, I went back online, thinking if I was lucky enough to find these rubber seals they would probably cost a fortune.

Low and behold, I quickly discovered that HomeHardware (a popular Canadian hardware store), still carries reusable rubber rings for the medium-sized glass lids at the very affordable price of $2.19 per box of 12. They called them “fruit jar rings.”

Amazed, I wondered why? Why were they still being produced if neither the jars nor the lids were in production? Shortly after, I bumped into one answer while visiting a local in the town’s antique store. She uses the rubber rings as a seal in her coffee maker! This also intrigued me: because these canning sets were so scattered throughout the people’s history, they had (like any true homesteader) found other good uses for them! But the obvious answer? The answer that kept surfacing?

“Canadians throughout the country are still using these glass lids for canning!”

It was true, just as my friend had said! I began haunting the thrift store, rounding up thick glass lids, the wide metal bands that fit them, the Gem or Jewel jars with a 78mm mouth! The jars were cheap ($4-$6 a dozen), parts are re-usable, I can locally buy new, reusable rubber rings as I add to my collection and my food isn’t being ‘dripped in’ anymore!

And sadly, no, these jars were not manufactured in the States! If you perchance find some down there, they probably came over the border with a Canadian who was moving to a new homeland. At times they can be purchased via online sources and if you live in western Canada, they pop up in estate & garage sales, in thrift shops and perhaps even in your grandma’s basement! 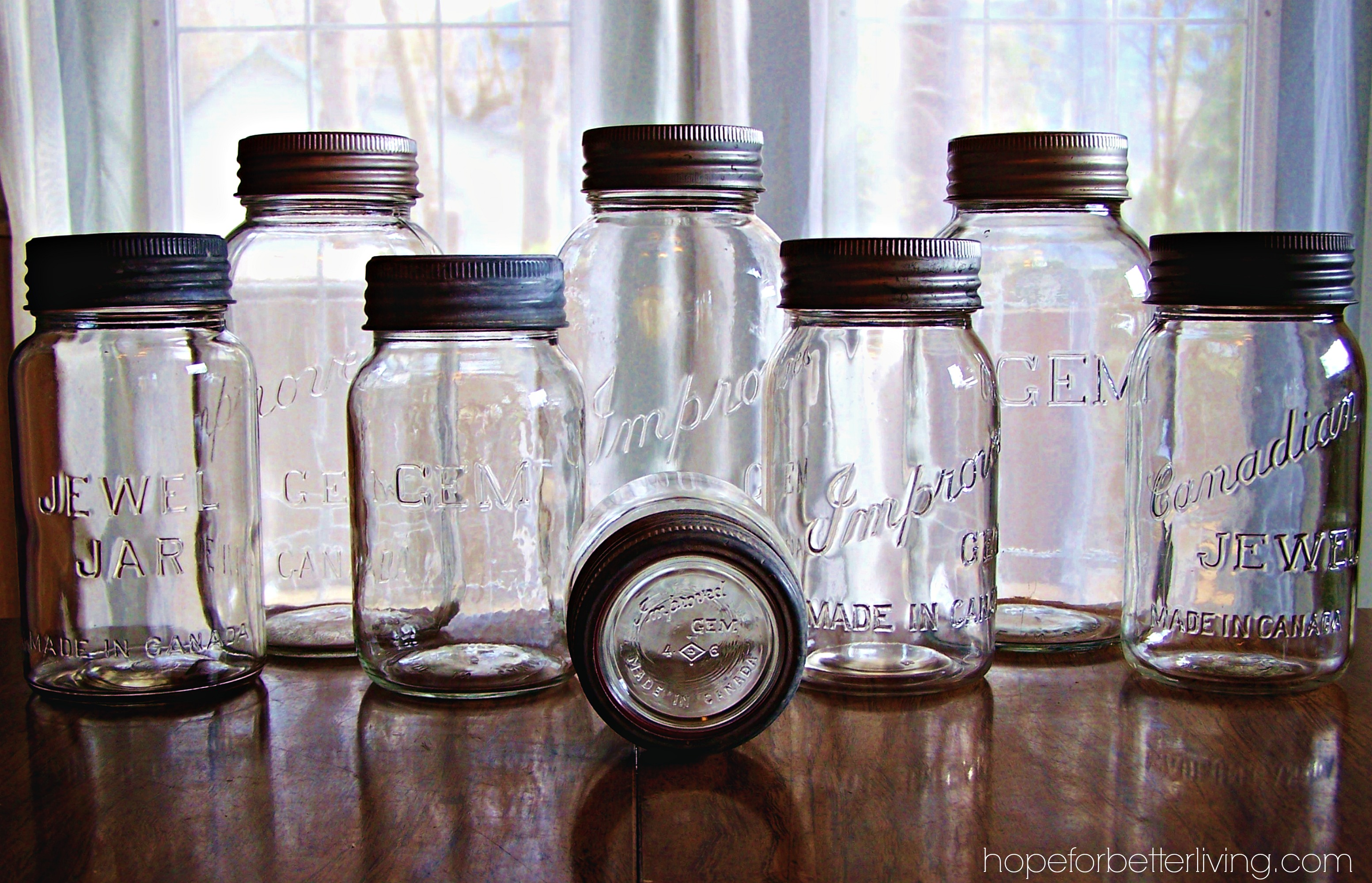 Want to learn the secret to safely canning in these jar collections? I’d be thrilled to walk you through it all! I’ve done the research and concluded that in light of the new-on-the-market tattler lid, I’m more than comfortable using glass lids! Indeed, the seal on all-glass jars is incredibly solid.

Disclaimer: these lids are no longer FDA approved, primarily because they aren’t on the market to be evaluated! However, they are similar to the tattler lid, the primary difference being glass vs plastic. The procedure is exactly the same with the exception that the rubber ring fits on the bottom side of the glass lids instead of flopping loosely by itself. A real bonus in my mind!

Want to learn more? Be sure to read Part 2-How Collect, Inspect and Prep!!!