Living on our property was a good thing, even if we were staying in an 8×12 power shed without running water! The quiet and rest was exactly what I needed. And it suited my man too. He only had to pop out the door and walk across the yard to work. And pop back for lunch. And so on and so forth!

After moving out to the land, the next big “house thing” was putting in windows and doors. We kept waiting for our order to come arrive. Ideally, we’d have both these and our wood stove installed by the holiday.

The end of the year quickly approached, but still, no windows or doors arrived.

Eight weeks later my man called in and pushed a little harder for answers. He discovered the company had somehow made a mistake. No order had been placed, and now? We had to wait another 6-8 weeks!

We’d hoped to spend Christmas eve curled up in front of the wood stove. It didn’t matter that the house wasn’t insulated! We wanted to spend it in our own home! But instead? We celebrated with a campfire in our yard.

It was a simple Christmas eve. No presents were given, but we were so happy to be reaching our big goal, we didn’t care! That evening, I pulled out the fiddle I hadn’t played in months, and we spent the evening reminiscing, star gazing and fiddling.

What can I say? Simple suits us!

After spending the rest of the holiday with friends and nearby family members, my man began to tackle the wiring. Yes, by himself! In studying the code book and asking questions of his dad + a friend, our house passed inspection with flying colors! 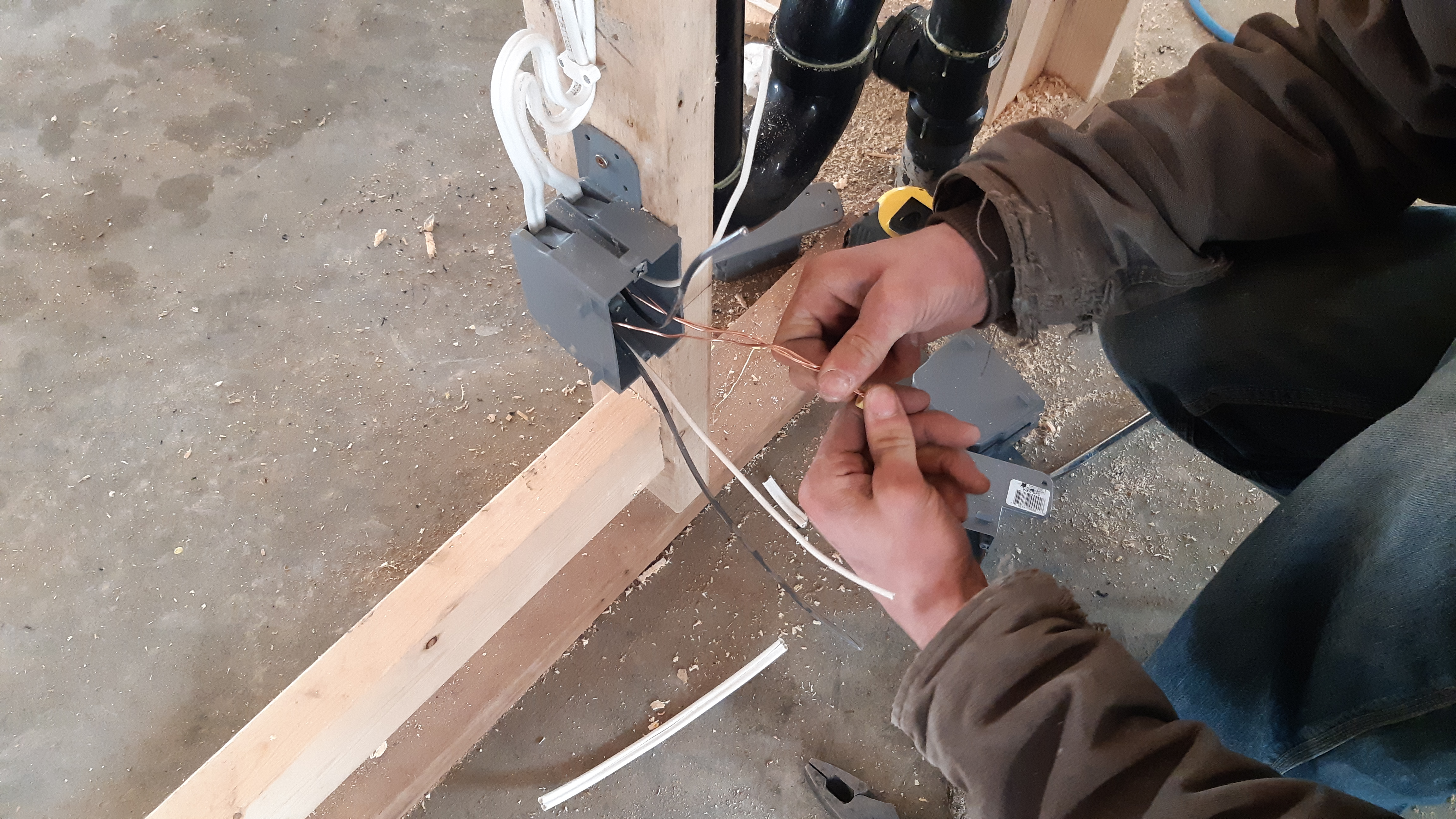 My only complaint is that my man had to do it in freezing cold temperatures. Yes, because of the delayed windows and doors!

Slowly, The Piece Kept Coming Together

When windows and doors finally arrived (14 weeks AFTER our original order!) my man installed them with the help of his co-worker. 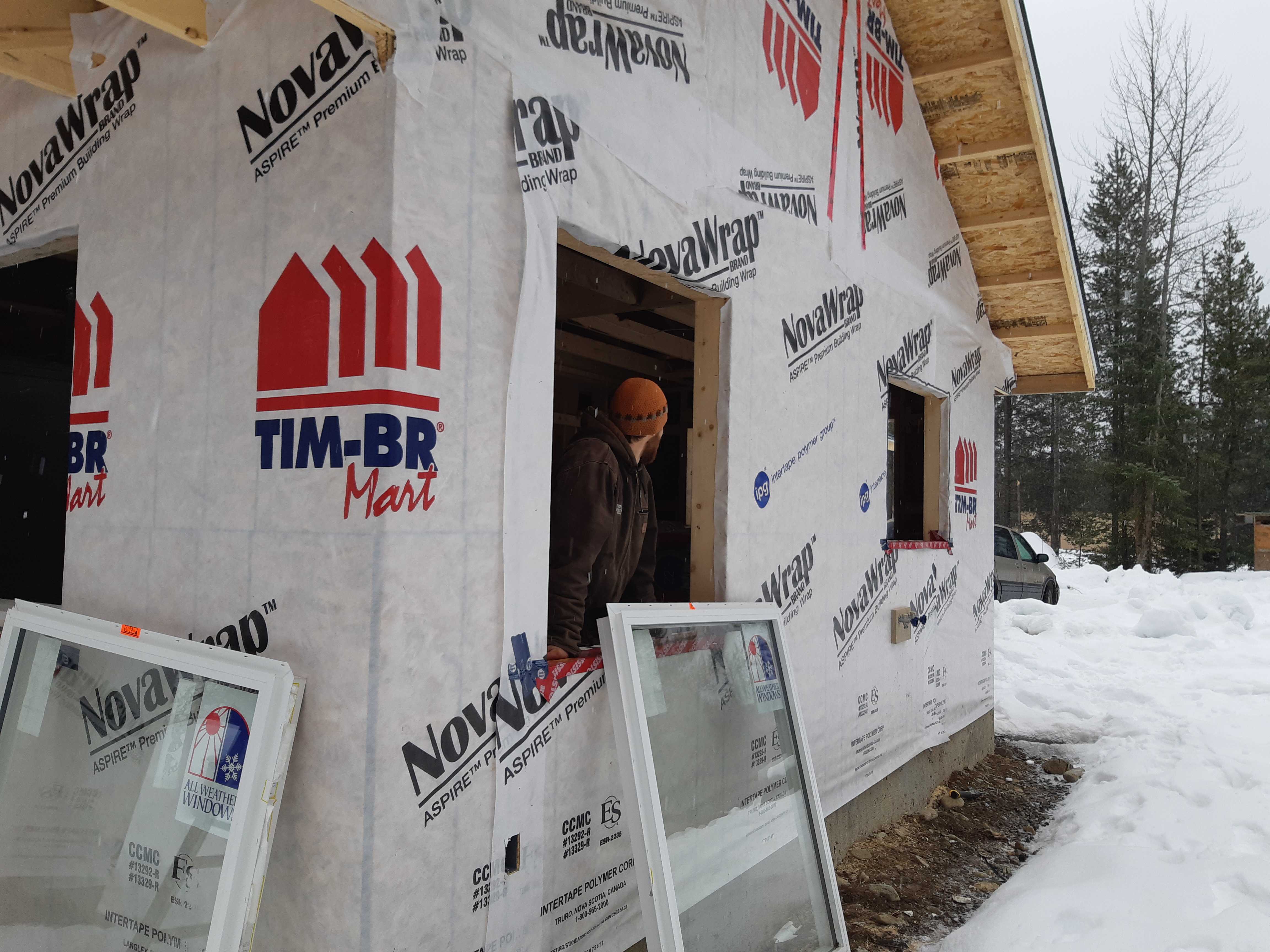 Next came the wood stove. That was a glorious day when we could finally heat the place up!

Originally, my man was supposed to go back to work the second week of January. But when his boss asked if he wanted more time off, he said yes! All of January and into February, my man worked on our cottage.

We hired a friend to put in our HRV unit and the infloor heating system. It was worth every penny we paid!

When it came to the big stuff, my ma  organized weekend work parties for insulating, hanging dry wall and even had help for some of the mudding and taping! 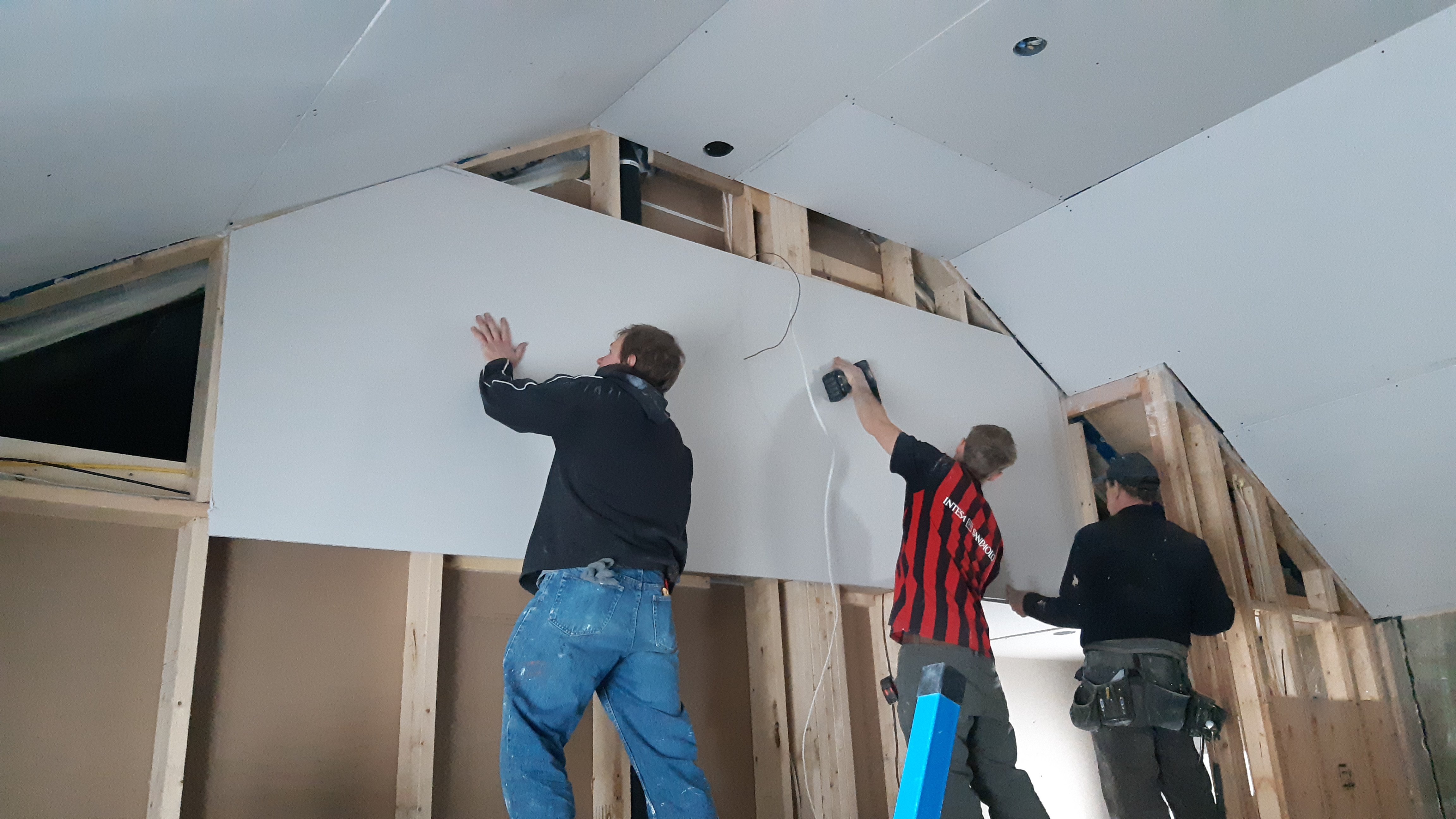 Once again, we were floored by the generosity of our friends. They were so quick to pitch in and help, even when all we could offer them was a meal! We were so very grateful!

Just before the texturing/mudding was finished, my man went back to work.

The Winter Days Got Long!

Even though I still had several large writing projects I was working on, things got tough when my man returned to his job. I missed him and the luxury of having a vehicle at my fingertips.

Over time, we realized I couldn’t do it all without a week day on town. Tuesday became my day to have the vehicle. It was good to get out, do laundry, grocery shopping, baking, check mail, attend to internet work and see friends. But over time, that day became crazy full and actually super stressful.

I wanted to sit down and visit people, not hop about their homes, trying to juggle laundry, baking and internet work! Sometimes I’d even have to pop over to the grocery store while the dryer worked it’s magic on our clothes, or check the mail while my bread dough was rising.

Yes, I started to miss having my own, fully outfitted home! I missed being able to have people into my home. 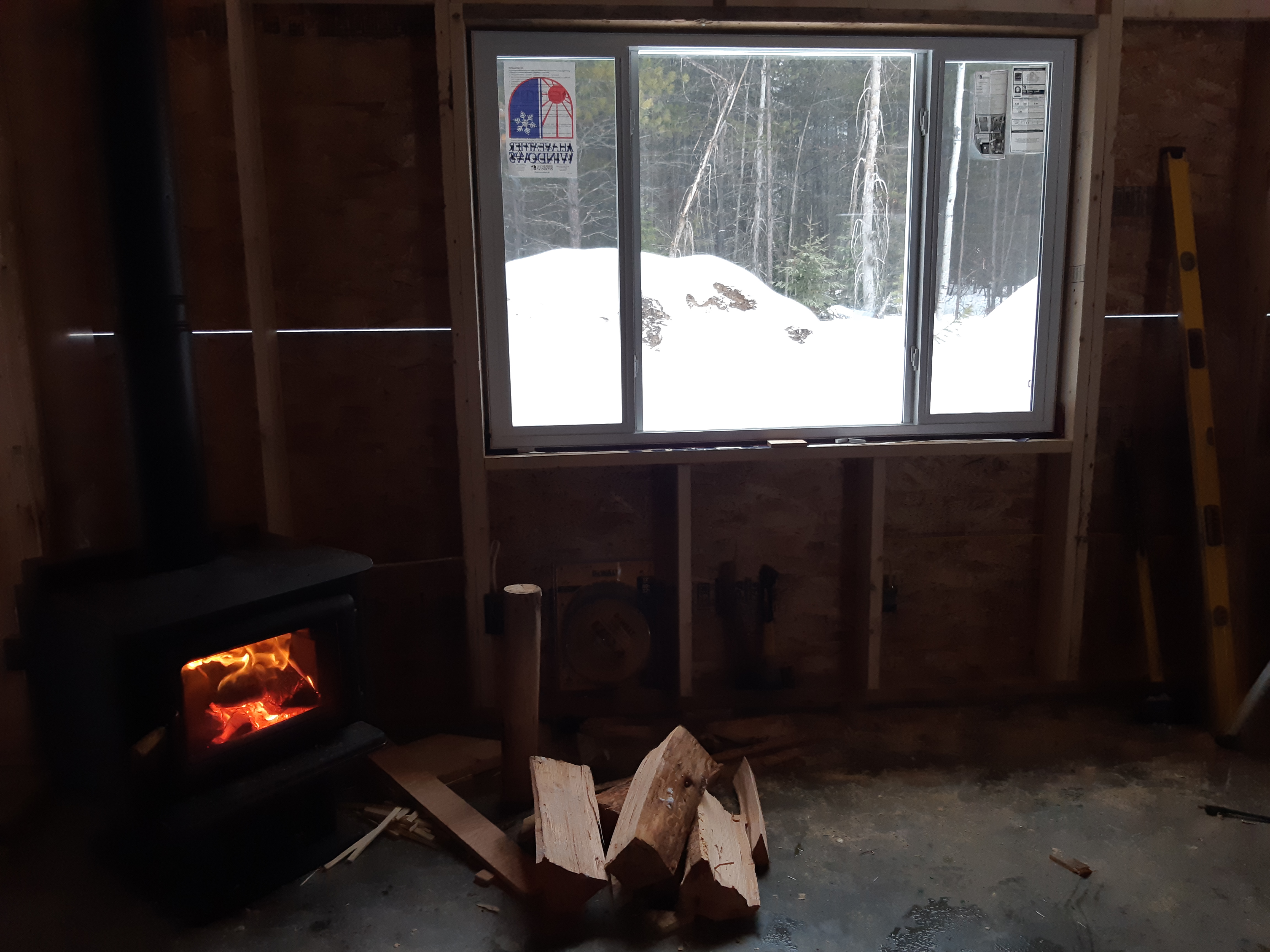 Then, we lost water at the property. My man found mold in our shed and had to clear it out. My teeth started causing me lots of pain (+ poor sleeps) and for weeks and weeks, dentists (yes, I saw more than one!) couldn’t figure it out what was going on. Finally, they found results that cost us a pretty penny.

And it happened not once, but twice that winter.

Melt downs started occurring more frequently. I was tired of the grind. We both were! And we were quite sobered by the fact that my health wasn’t improving, even with all the rest I’d been getting.

It was a tough time for us on many levels.

That’s How It Went Down

I don’t share the hard things to whine, complain or make you feel sorry for us. But I do want to be honest. It wasn’t easy!

Sometimes, it felt like something was working against us. Even in our house building, delay after delay hit us, often through no fault of our own. And seriously, whose loses water at the end of winter?

The silver lining in the dark cloud was that our vehicle kept running steadily and faithfully during this time. We were so grateful for that!

And I have to say, if something was working against us, it was countered by the good people who stood for us.

I think I’ll always feel that we didn’t journey to the farm on our own. As I look back, I can see that helping hands were entangled throughout, supporting, helping and encouraging us since the day we first arrived in this valley. And especially, as we worked to create our mountain farmstead.

Spring Descended Over the Land…and us!

As spring descended in the mountains, it seemed that our hope and vigor was also coming back to life.

Green bits of grass were popping through the torn-up work site when my man’s oldest brother came down to help with some finishing work. The septic field went in. Flooring went down. Tiles were laid. Landscaping took place around the house.

While our cottage didn’t yet have exterior siding, the inside was next thing to live-able! 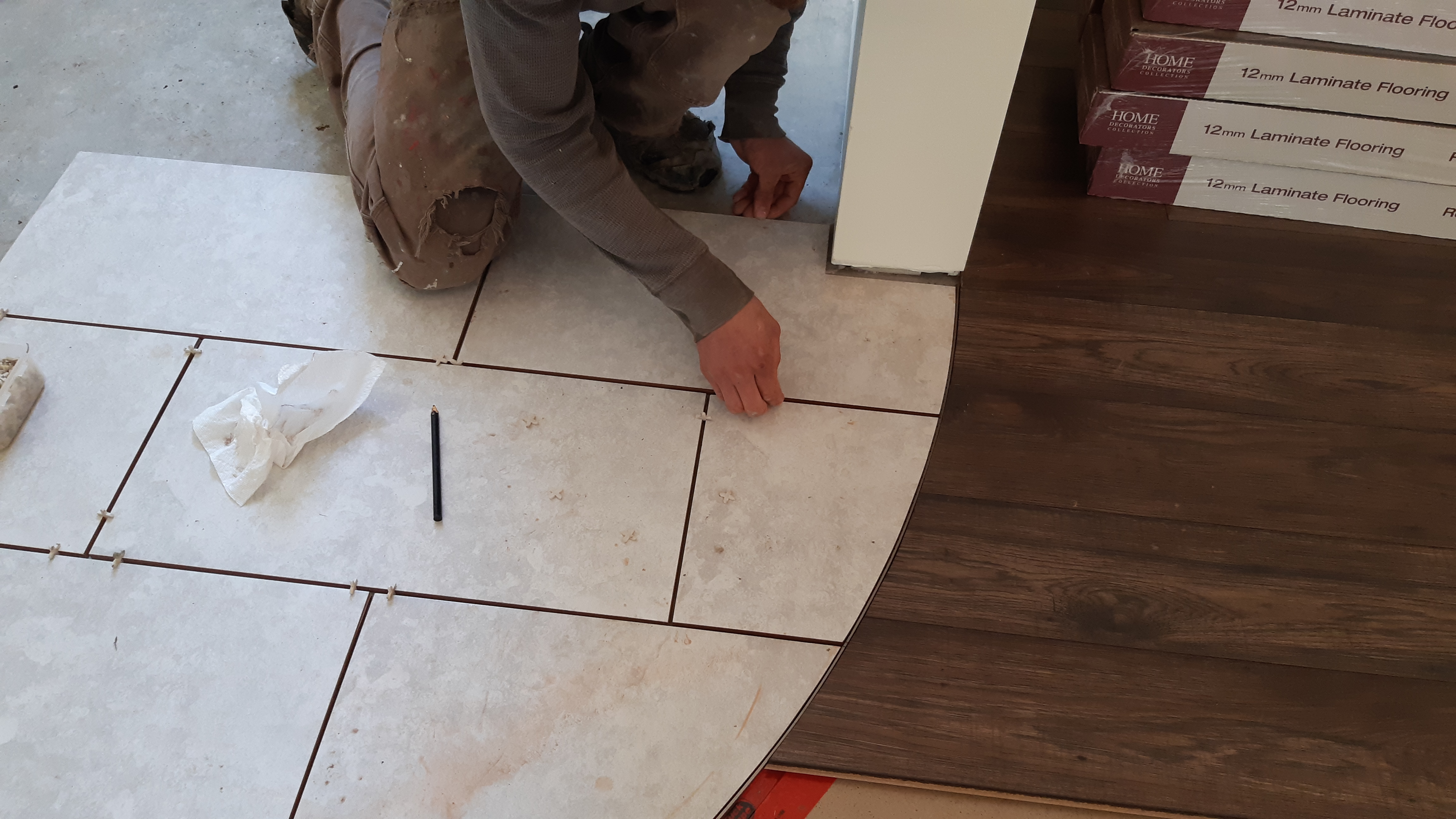 Finally, things were wrapping up. Kitchen paneling and cabinets, the trim and interior doors were all that was required. Was it really, almost over?

It was time for a new beginnings! On Easter Sunday, the realization hit me. The crazy season of our journey was almost over! I kept trying to hold back the tears as we sang songs of praise to our God. This crazy, hectic, preoccupied season of life was almost over and it was nearly time to move on, to once again set our focus on other things.

You see, my man and I struggled throughout this whole house building process. It was consuming, doing it ourselves and particularly so, because we’re in a time crunch. There were decision to be made, things we had to wait for and mistakes that forced us to adjust our plans. Mentally, our heads always had to be in the game...or we paid for it later on! 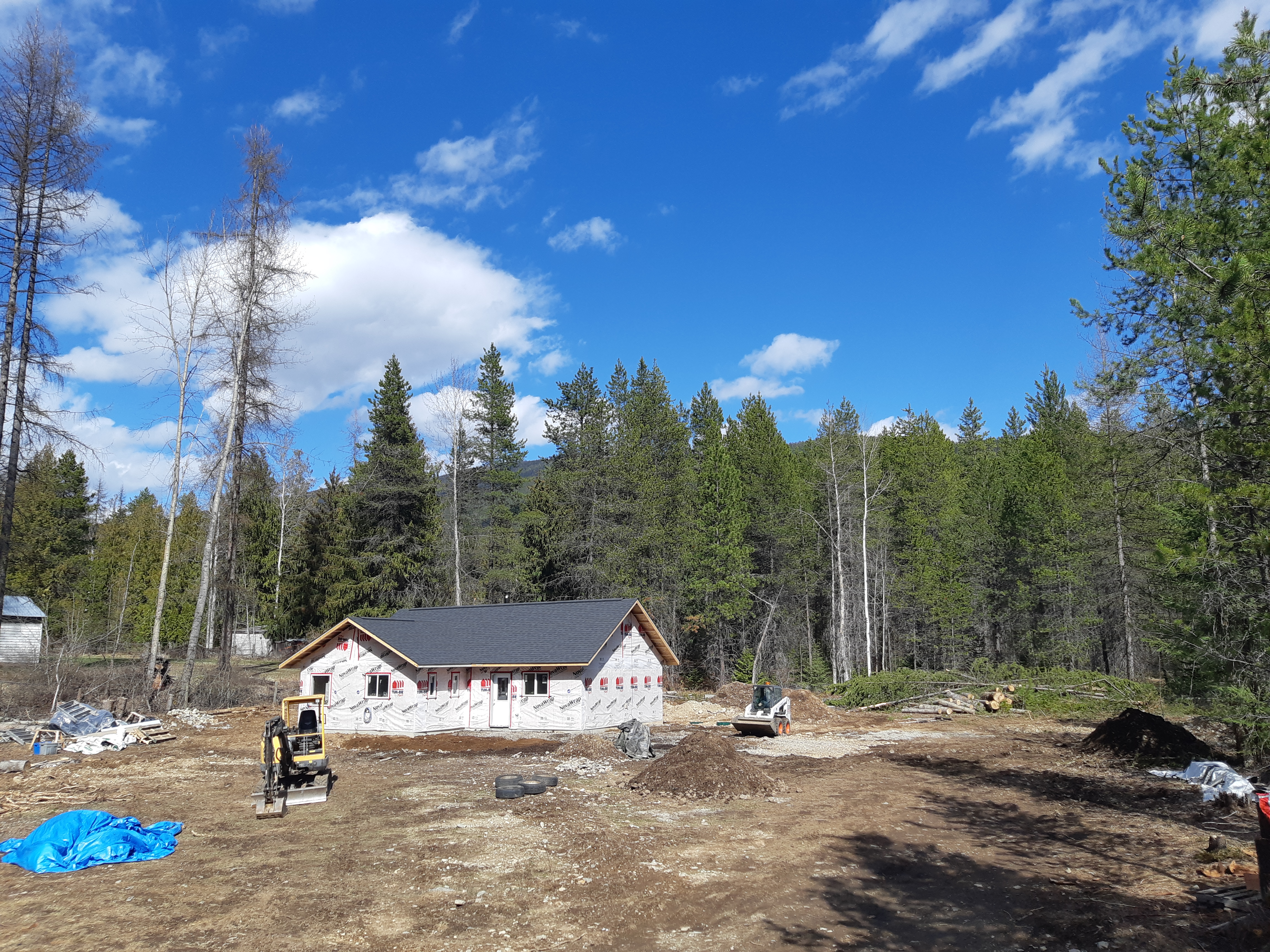 We felt as if we’d had both feet in one world (aka house building) and our hearts in another (wanting to invest into things that God is most keen on). Not that our house building was a bad choice. We had peace about it and have been undeniably blessed on this journey!

But I was ready for our feet and hearts to be in the same place, to move away from the tension. And that Easter morning, I realized we were moving into the change I so craved!

Spring was flowing over the land and also, into our souls. The long winter was over, our house was nearly finished and we were once again going to lead normal lives. But this time, from the four walls of our very own home!

And maybe, once I got my health under control, we could start thinking about starting a family?

And that, my friend, is where I wrap up this series on Our Journey to the Farm! If you have questions about our journey/home/land/etc, feel free to send them my way this next week and I’ll do a Q & A here on the blog!

I also want to say that even though this series is over, I’m going to continue sharing about cottage, garden and farmyard developments every Friday. So keep tuning in if you want more!