Rhubarb. Some would say it has lost it’s popularity over the past century or so. And it just might be true. It used to be that rhubarb was a given in nearly every gardener’s plot of earth, were it’s tangy, red stalks were readily harvested for use in home-baked desserts!

Because the addition of rhubarb is such a delicious way to stretch out your fruit supply, and because it’s so simple to preserve, I’m going to show you how to freeze rhubarb!

Rhubarb is an edible stalk. We all eat celery, right? Rhubarb is no different, except that it is totally different.

Rhubarb loves acidic soil, and it’s one of the first garden plants to appear in spring. Early on, the crown sends up multiple smooth, green and red stalks. Each stalk displays a single, fan shaped leaf. These leaves are poisons to both humans and animals. So don’t! 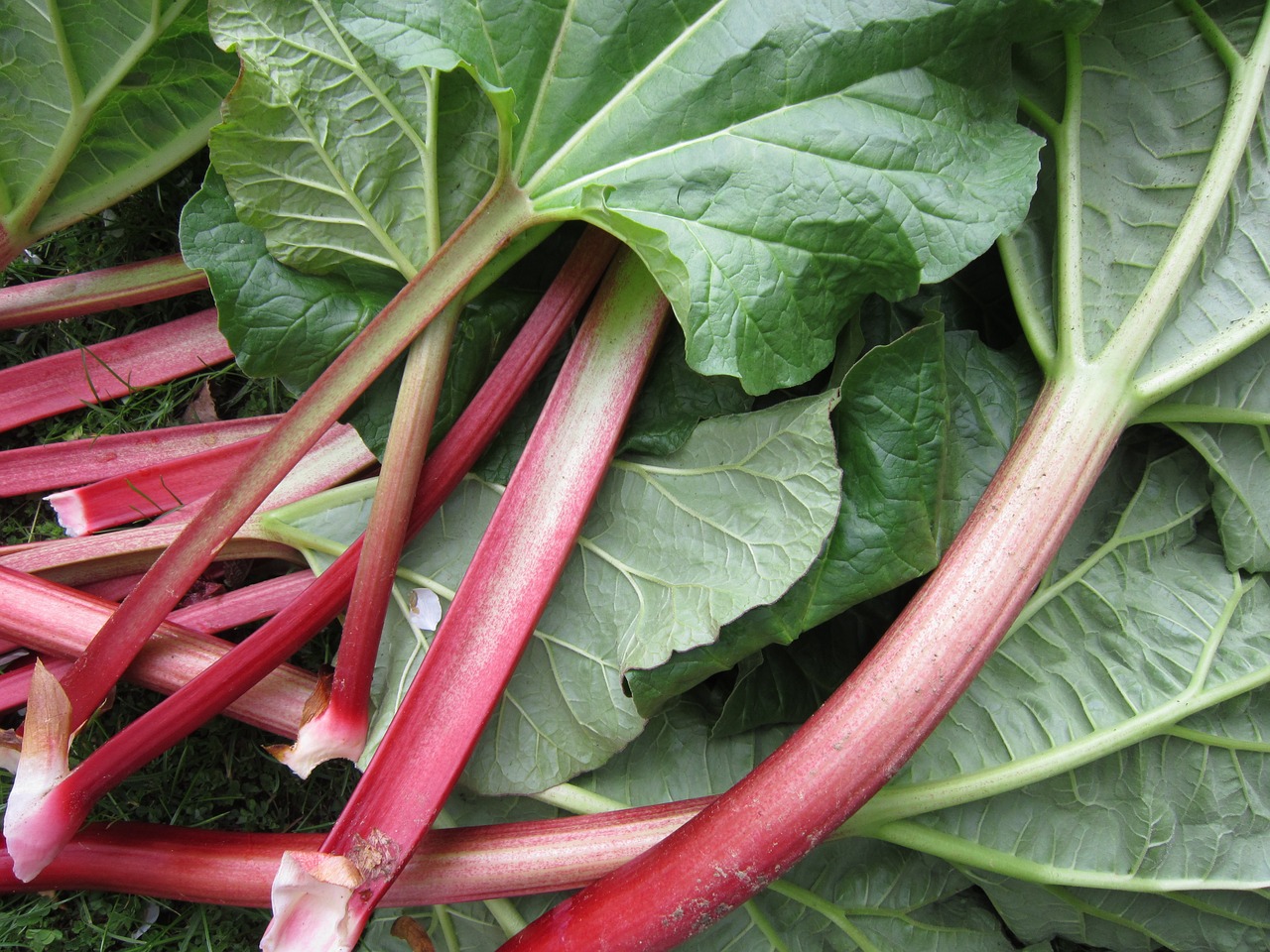 The stalks themselves are crisp, have a good crunch and are very, very sour. Only eat them in cooked form. Because of their tang, they pair beautifully with sweet desserts and particularly, strawberries. If you’ve even flipped through old cookbooks, you’ve likely come across numerous dessert recipes calling for rhubarb.

Rhubarb is an oldie. But its a goodie!

Sourcing Rhubarb in Your Area

If you don’t grow your own rhubarb, you can sometimes find the stalks mid-spring at local farmer’s markets and produce stands. The plant isn’t as popular as it once was, but it’s still around!

How to Harvest and Clean Up Your Stalks

If you are fortunate enough to have mature rhubarb in your garden or, if you can can source it at a local U-pick, here’s the basics you need to know about harvesting and preparing your stalks.

First, choose stalks that are still young and tender, roughly the size of a man’s thumb. Gently twist each stalk loose from the crown, then trim off the large, fan-shaped leaf at the end of each one. 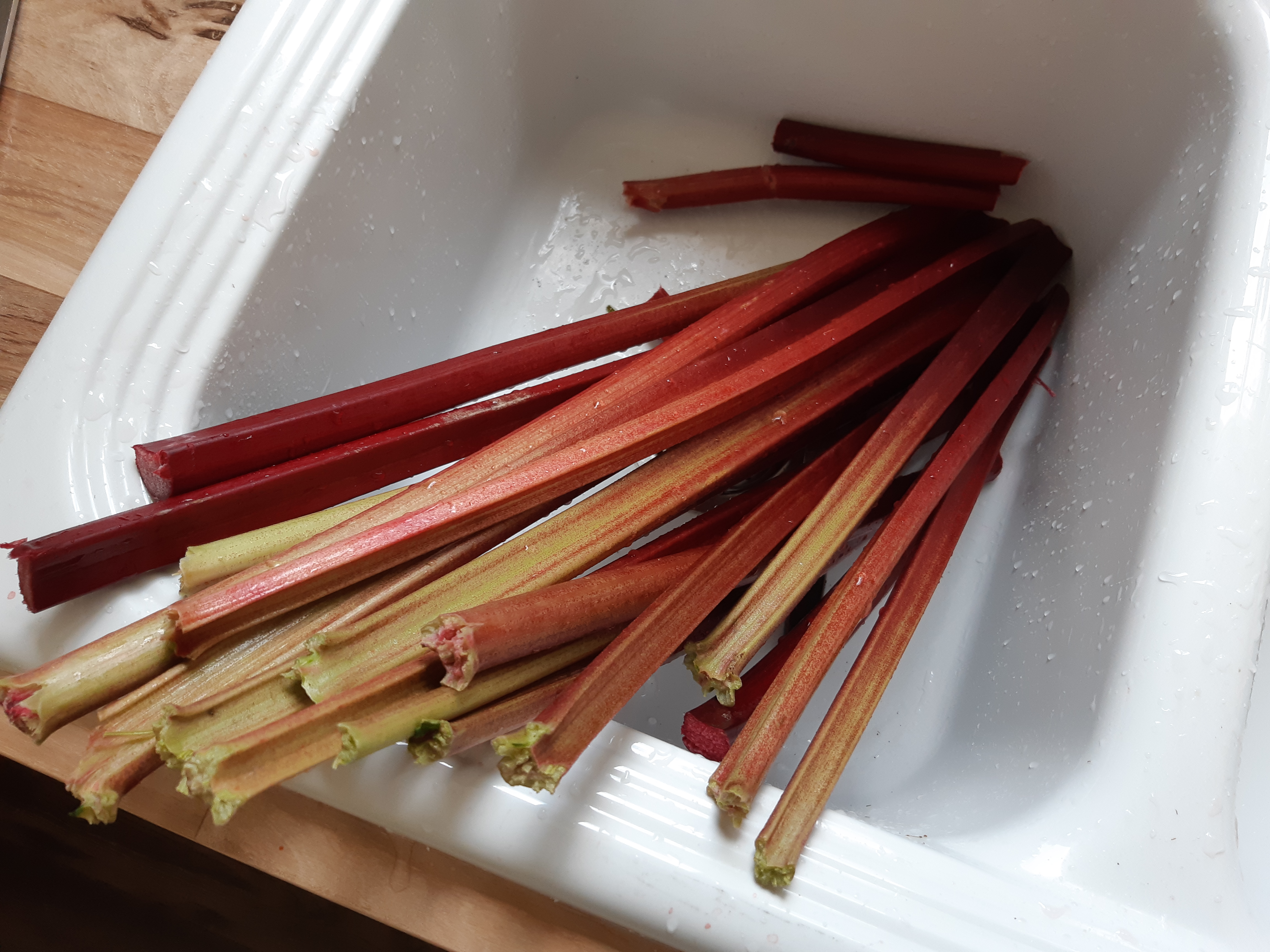 Remember: these leaves are poisonous! Don’t eat them, and don’t feed them to your poultry or livestock! You can use them as mulch around your rhubarb plant or toss them into your compost pile.

Once you’ve brought your rhubarb indoors, be sure to give it a good rinse. Cut away the tough end of each stalk where it was attached to the crown. Do a quick check to see if any slugs have snacked on your rhubarb, and if you find any such areas, cut them out.

It’s time to grab some freezer zip loc bags, a cutting board and a sharp knife! Preparing rhubarb for the freezer is incredibly easy! All you do is slice it into rings, anywhere from 1/2-1 inch thick.

There’s no need to pre-freeze your slices before bagging. Rhubarb is dry and it’s easy to break the rings apart when you need them!

However, I do recommend measuring out the rings as you dump them into freezer bags. Two cups? Four cups? Six or eight? It simplifies the baking process if you know exactly how much each bag holds! 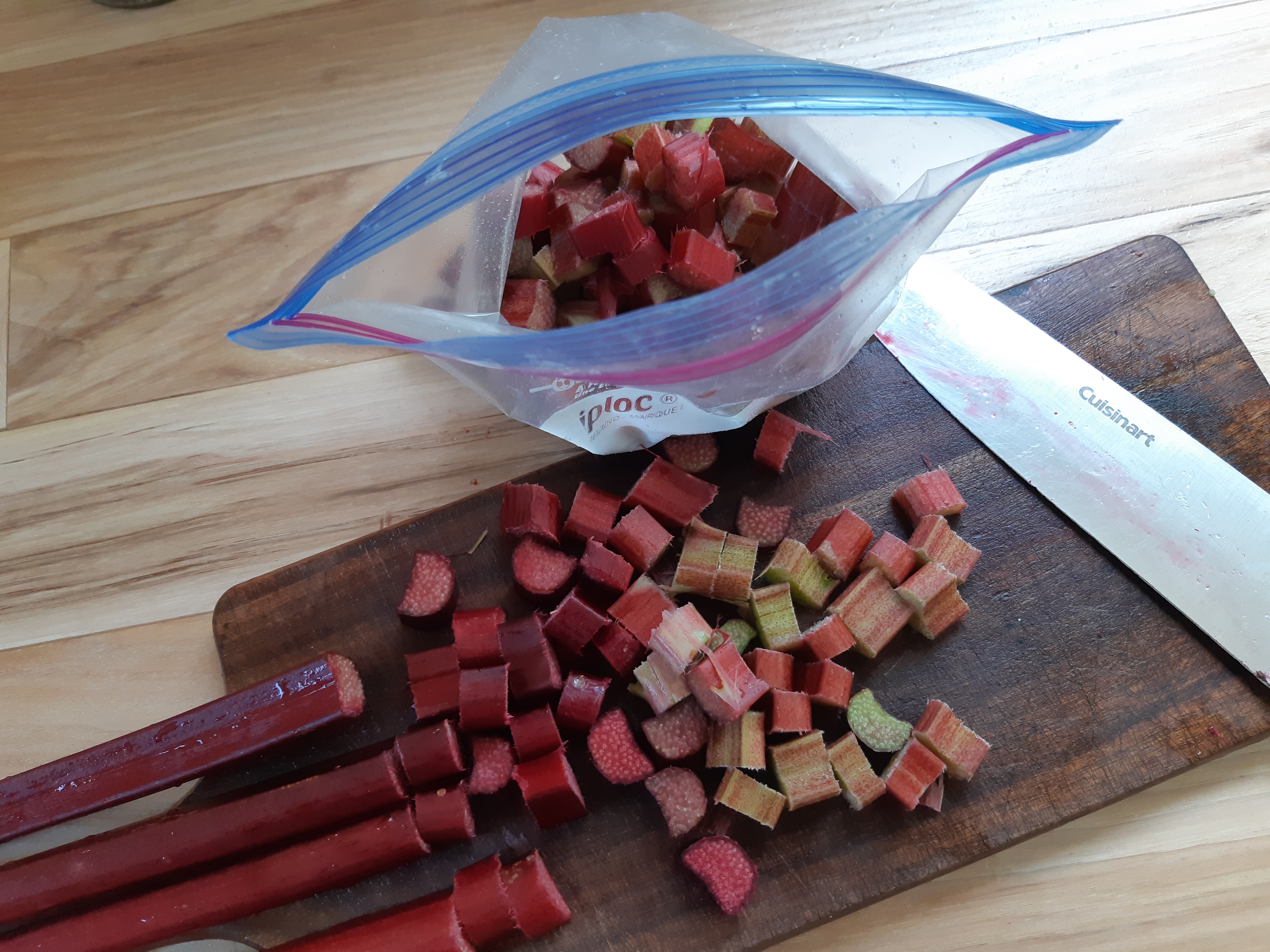 Push all the air out of your filled bags and seal. Lay them flat on their sides in your freezer, until they’re frozen. Label, stack them neatly and they should keep for 6+ months!

Now you know how to freeze rhubarb! No blanching, no stewing or sugaring. Just harvest, clean, dice, freeze, then use it to stretch your fruit supply a bit further on baking day!