When I first began making my own homemade laundry soap, I felt like a real homemaker! I’d make a big batch of hot process soap, grate the bars and add a rounded handful to every load of laundry I washed.

And I’d feel like a million bucks. Me, making my own laundry soap from scratch!

But after a few years, I began to feel frustrated with our laundry situation. Colors began to lose their brightness. Strange, dusty-white lines and blotches began to appear on dark materials. And for some reason, things didn’t feel clean after coming out of the washing machine.

Reasons to Avoid Using Homemade Soap in Your Washing Machine

At first I thought it was because our clothes and bedding were getting old. But when my man suggested it was my natural, homemade laundry soap bar that created the problem, I did some research. And it turns out he was right!

Here are the 6 reasons to avoid using homemade soap in your washing machine. 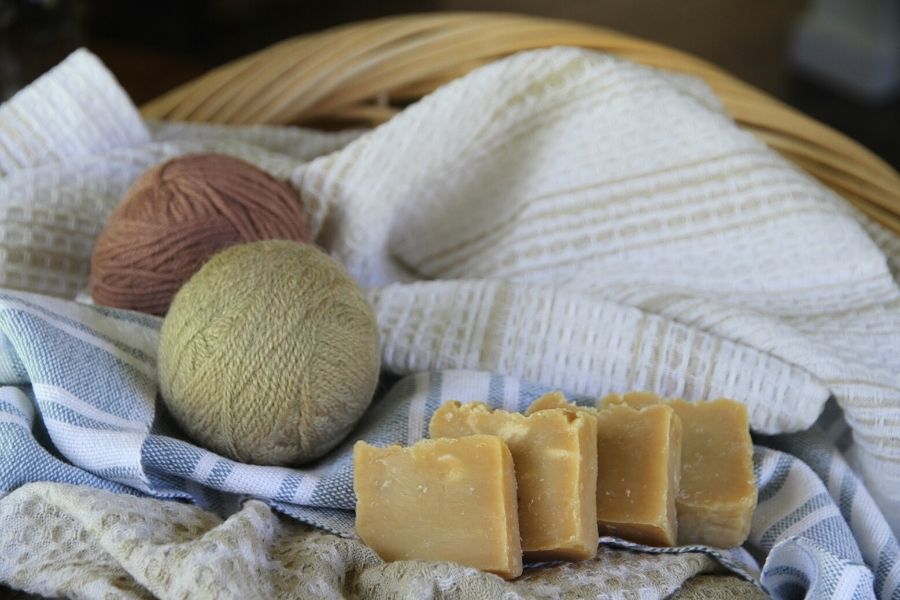 Reason 1: Washing Machines are Designed for Detergents Only

While it’s true that women have been making their own lye-and-fat laundry soap for centuries, the laundry routine has significantly changed over the years.

Laundry detergents weren’t developed until WWI. In Germany, food was on rations and particularly, the meat and fat supply. Because of this, most women could no longer make their own laundry soaps. So laundry detergents were introduced to the public in order to save on valuable food resources.

And the rest of the world soon followed suit.

As you may have guessed, our modern washing machines are designed for detergents, not lye-and-fat based soaps! In fact, using homemade soap bars in your washing machine can ruin your washer and cause you to lose any warranty you might have on your machine.

Reason 2: Homemade Lye Soap Will Leave Buildup in Your Machine

Homemade soap bars will eventually start leaving buildup in your machine. If you use a top loader, you may start to notice white, powdery-like dust appearing on your darker fabrics after they’ve been washed!

At first I didn’t put two and two together. It was very frustrating to find my favorite set of navy blue bed sheets covered with patches and lines of white powder that wouldn’t brush off.

And I couldn’t understand it!

However after inspecting my top loading machine, I discovered that the agitator (the center piece) was covered in a buildup of white, sticky powder. And as it worked the laundry, it would transfer the powder to my fabrics.

Because washing machines aren’t designed to handle lye-and-fat soap bars, they don’t properly process the leftover fat residue. As a result, these fat particles get lodged in the threads of your laundry every time you do a batch.

While boiling our clothes and washing by hand would loosen these particles, our modern washing machines don’t have a “boil” function (unless I’m missing something). Most modern detergents are designed to work even in cold water, something your great-grandmother never had the luxury of experiencing!

Because of the slow and steady buildup that occurs, fabrics washed in homemade soap will lose their bright, sharp look over time.

This was very noticeable with my man’s work shirts. I attributed their increasing dullness to the fact that they were just old (why do husbands like to hang onto nasty work shirts?!), that the loss of color was likely because of aging fabric.

However, after stripping one of my man’s work shirts that used to be a vibrant blue, I discovered the colors hadn’t faded; the build up had taken over. 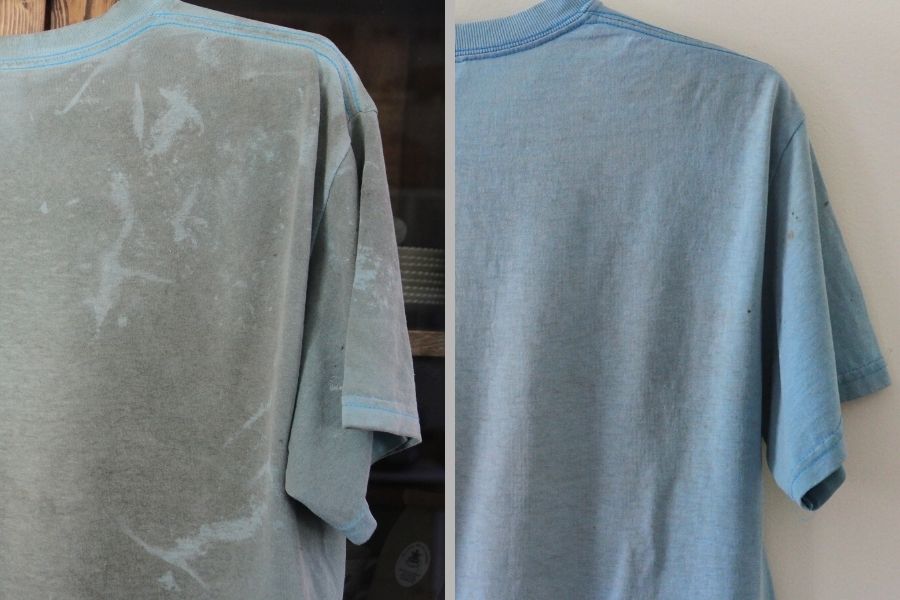 As I continued to use my homemade laundry soap in the washing machine, I began to notice that fabrics started to feel slightly damp, or even slippery after they were thoroughly dry.

I couldn’t understand it.

It was frustrating to slip in between the bed sheets at night and instead of having that soft, silky feel, it almost seemed as if things were covered with a light layer of…something.

Our work clothes continually grew more stiff, until they began to feel as if they had been lightly starched. It was all very strange, but I didn’t doubt my soap bar. Not for a moment!

Reason 6: Your Clothes Will Look Dirty After Being Washed

All these things resulted in laundry that looked dirtier after each washing. And that’s something no homemaker needs!

Because the buildup was gradual, it was difficult for me to see what was actually happening. When I first started using my natural soap bar, I didn’t notice any change.

Slowly things went downhill, until even I couldn’t miss out on the fact that something was off!

And here I am today, literally airing my dirty laundry to you, hoping that it will help some of you solve your own laundry problems!

At this point you may be wondering exactly what the solution is? Are traditional, lye-and-fat soap bars a no-go in our modern washing machines?

To this I would say that using just homemade laundry soap bars in your washing machine is indeed a bad idea. There are homemade, low-fat bars you can create and add to home-mixed powder detergents for extra cleaning kick.

But the bars must be low fat, rating 1% superfat on a soap calculator. Apart from this, the bulk of your natural, homemade laundry detergents should consist of washing soda, borax or other “natural” powdered cleaners.

I’m still learning and experimenting with this particular homemade detergent recipe. But rest assured that when I find something I’m 100% satisfied with, I’ll let you know!

In the meantime, you may want to start stripping some of your laundry.

How to Strip Fat Residue from Your Laundry

Laundry stripping is an process that removes all homemade soap residue from your clothes, bedding and towels.

Even if you don’t use homemade laundry soap, buildup can occur with commercial laundry detergents. And dryer sheets are notorious for leaving a film on your clothes.

So if you have bed sheets or an article of clothing that just isn’t as bright and soft as it used to be, stripping your items can remedy the situation.

By leaving your laundry to soak in hot water with a strong (but still natural) cleaning solution, you can loosen the fat particles that are caught up in the cloth’s fibers.

It works well and is one of the fastest way to get your laundry looking bright, fresh and soft once again.

If you’ve been using homemade soap and jump to using a stronger laundry soap without stripping your laundry, your clothes will look even more grotesque as certain areas come bright and clean, while others hold their grungy look. Like this. 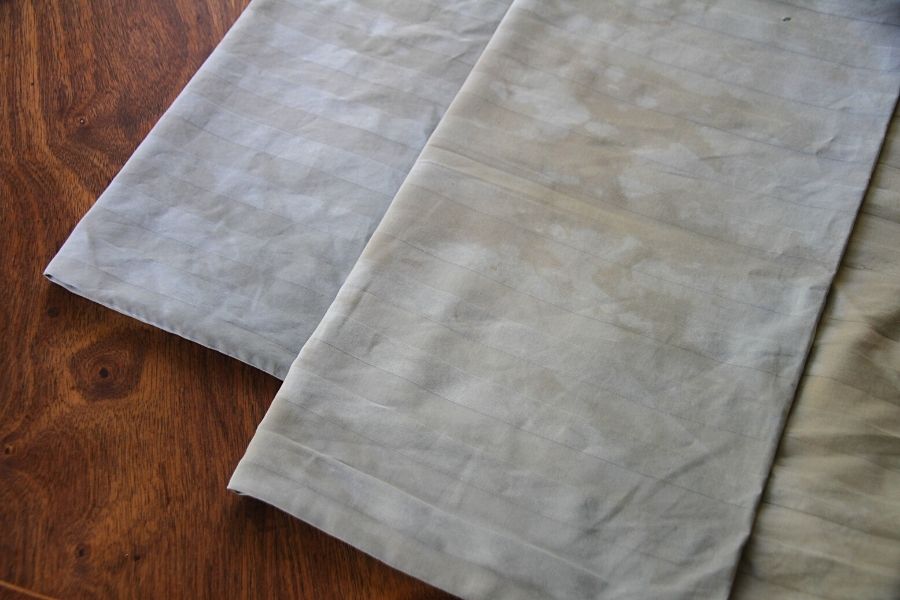 These are 6 reasons to avoid using homemade soap in your washing machine! And just let me say there’s a reason I never shared my homemade laundry soap recipe on the blog (even though some of you asked for it).

I had to try it for an extended period of time to ensure I was actually happy with the results and that it worked well, long term. As you can see, it wasn’t satisfactory.

In this blog post HERE, I teach you how to strip laundry using a natural cleaner.

It’s going to be dark and dirty. But it’s the only way to revive your clothes, towels and bed sheets after they’ve collected soap fats and residue. 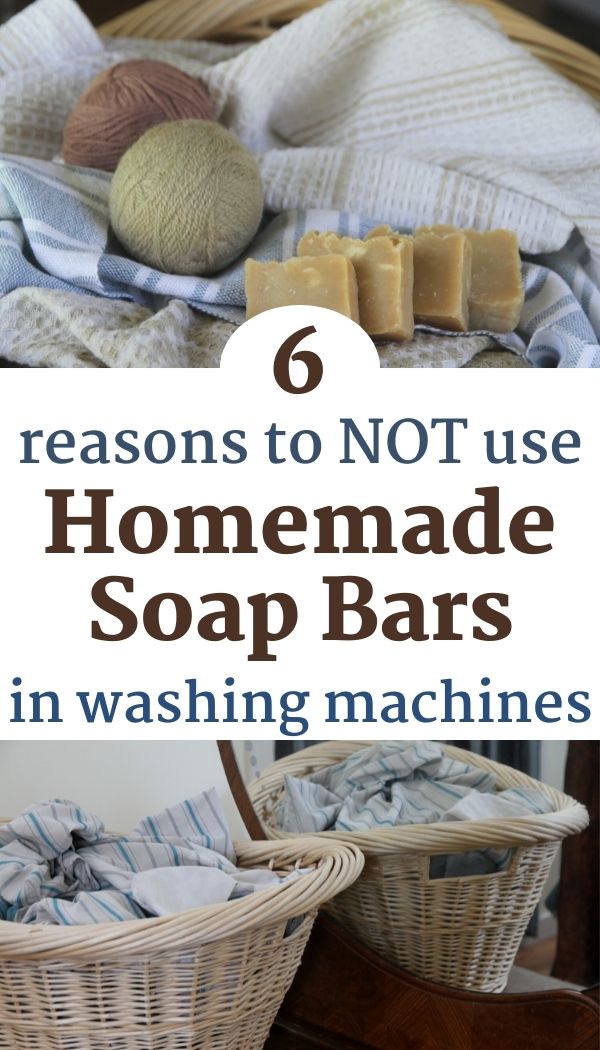 Previous Post: « A Refreshing Rhubarb Drink Recipe
Next Post: How to Strip Your Laundry of Build Up »