When you think of living the country life alongside your spouse, what picture appears in your mind?

Snuggling on the veranda swing over a summer evening with a cup of iced tea, watching the stars appear while the frogs sing in harmony? Chatting about your day, the kids, the animals?

Peacefulness. In evenings you rest, knowing the cow has been milked, eggs collected, laundry folded, children tucked into bed?

A slow-paced lifestyle? Is that what you dream of? A way of living that leaves time for connecting, that nurtures and promotes good relationship?

Maybe you envision battling away, side by side against the elements, predators, the mortgage company? Of fighting for something together?

That’s our hope, isn’t it? That our natural living activities would draw us closer together, give us a common purpose and goal?

What happens when you discover the lifestyle you’ve worked so hard to get isn’t what you expected?

That it isn’t always slow? That it can be stressful? And the work is never done? And you’re too tired at the end of the day to snuggle up and count the stars?

While these realities can be difficult to accept, there is one far worse that readily rears its head for many of us!

What happens when you discover that working alongside your spouse isn’t working?!!!

When it comes to this topic, there’s silence, mostly silence from the homesteading community. Why? I dunno.

Perhaps because it isn’t an issue for everyone. Maybe because its a very vulnerable part of us? Or because we can’t share without the permission of our spouse? Many of us find it difficult to reveal that vulnerable side of ourselves to close friends. Throwing it open on the web is like asking for a knife to the heart…and our pride.

However, I do believe working alongside a spouse is more of an issue than some of us would admit!

Our Story in a Nutshell

As I think back to our first attempts at raising a garden and animals, the entire experience can be summed up in one word: frustrating.

I grew up working alongside parents and many siblings. Working together brought a sense of unity, of camaraderie and purpose. I expected the same for my marriage.

My man and I cared about one other. We wanted a good relationship, had worked hard to that end. But when it came to literally working together, we were like two fighting cocks dumped into the same pen!

We couldn’t work together. We couldn’t even start indoor seedlings without a disagreement!

And while we weren’t the purple-faced, vein-popping, tight-fisted fighters, times that were supposed to be bonding, fun, or even date-like, resulted in heartache instead.

Most of the time, our “together” activities would leave us disgruntled, the feeling of accomplishment obliterated by a very uncomfortable strain in our relationship.

We wanted to work together. We really did! We would sit down and hash it through: why wasn’t it working?

The Temptation to Give Up

After bruising each another repeatedly and seeming to move nowhere, we almost gave up. Working together wasn’t working. Perhaps it was just a pipe dream, a hope that would never become our reality.

Our relationship was far more peaceful if our work paths didn’t cross. He could enjoy accomplishing his tasks, and I, my own.

And yet, in spite of the bruises, there was something inside of us that rose up! To avoid working together would be the easy way to go. Was that what we wanted for our future, for our marriage?

No! A loud and clear, resounding ‘no.’

So onward we plodded. How could we move toward understanding and working alongside one another? Here is what we discovered: 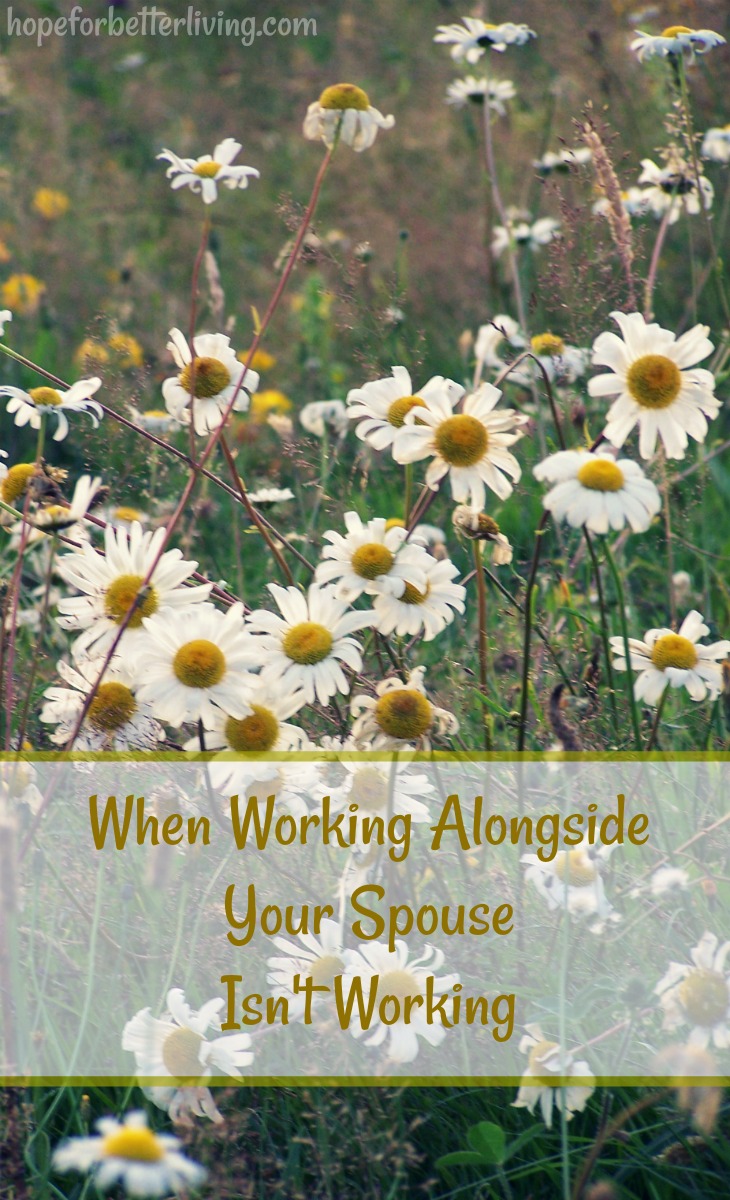 Working Together Wasn’t the Problem: We Were

We slowly realized that working together didn’t cause our issues: it revealed what already was. This realization emphasized the importance of honesty, vulnerability and forgiveness in our relationship.

If I had done something to disrespect my man (knowingly or not) or he had hurt me (knowingly or not), suspicion was aroused and manifested itself on the job. Perhaps it was distancing ones self, reluctance, disengaging, a commanding attitude, argumentativeness, the need to be right, grumpiness, etc.

These actions led to only deeper levels of distrust and conflict. We discovered that genuine honesty was necessary: honesty with self, God and one another.

I know. Letting someone know they’ve hurt you is hard! It requires vulnerability and the death of our pride, as does asking forgiveness. Asking forgiveness is equally humbling. And yet we couldn’t move forward without it.

Honesty can be dagger when used in self-defense, but pure, unselfish truthfulness was crucial to a good relationship.

The other key thing we learned was that we had differing end goals when working together.

By all appearances, it seemed we had the mutual goal of completing the task at hand. However, we soon discovered differently. After a while, we realized our end goals were very different! Not only that, but they were colliding. Once we could begin communicating about them, things began to clear up.

He Wanted to Conquer

When my man goes to work, he’s focused on accomplishing the task at hand. Intent on the project, its time to git-er-done! At the end of the day, he wants to know that he has conquered. He wants to feel pride and satisfaction in the work of his hands. This isn’t a beastly, inconsiderate side of manhood. He’s wired this way.

She Wanted to Connect

While I like working hard alongside my man and while its a very satisfactory feeling, at the end of the day, I want to feel closer to him. And I want to know that he feels closer to me. Often, that connection takes place through talking and being listened to. Its not a petty, emotional side of womanhood. I’m wired this way.

Most men can’t build a chicken house and hold an intelligent conversation about great-aunt Margaret. And when he’s focused on the task at hand, his language is directive, less relational and doesn’t correspond so well with my desire!

I want to be heard and sense that he cares. Short words, directions and deaf ears don’t exactly help me reach my end goal of feeling closer and connected.

And so the situation would unfold: either he couldn’t work well (because of great-aunt Margaret) and would feel frustrated, or I would feel belittled because he wasn’t listening, was too directive.

From there, the cycle went ’round.

Though we’ve by no means mastered it, we are learning!

My man can let me know what he needs before we begin. If the job has been weighing on his mind, I’m made aware that this time, its about completing the task at hand.

If I let him know I need a listening ear while we plant corn, he knows to put his “git-ur-done” mentality aside. This time, its about connecting.

Simple though it is, it helped us clear the air. Suddenly, we weren’t getting frustrated or offended. We knew. We understood. We began learning to put ourselves aside for the other person.

Of course, everything looks better in hypothetical situations! It doesn’t always work so perfectly! Sometimes, I need to connect and he needs to get the job done. Relationships don’t fit formulas and require sacrifice; lots of it.

We keep learning, keep giving, forgiving, keep pursuing honesty, looking to nurture our relationship as best we can.

And while we discovered the roots of our conflict, we also, over time, discovered “relational tips” that help us keep the air clear, shared in “How to Peacefully Work Alongside Your Spouse!”

Do you have any marriage wisdom to share with us? How have you overcome your marital struggles? What was the pivotal decision that led to (slow or fast) change?

Previous Post: « How to Make Herbal Infused Oil
Next Post: How to Peacefully Work Alongside Your Spouse (part 2) »