It happened the first year we put all-heirloom seeds in the ground. The idea of seed saving was so intriguing that it only seemed right to try! Being new to it all we kept it simple, choosing to save seed from peas, tomatoes and cucumbers.

That spring was exceptionally early. Heirloom Amish Peas went into the ground almost 2 months before the normal planting date. They did well!

As the plants sprawled over their willow trellis, we noticed that a bug or caterpillar was chewing on the leaf edges, leaving a scallop-like pattern behind. Whatever the pest was, it left the pods alone. Because of this we were totally unconcerned.

After a time, a few dark spots no larger than a pin-prick began to appear on the pods. However, nothing seemed unusual inside the peas! They were a delicious, long-bearing variety.

After stashing some in the freezer and more in our bellies, the remaining pods were left to mature and dry on the vine. When ready, the plants were pulled and transported to our backyard.

Exciting! This was the very first time!

My man and I painstakingly removed the dried pods, plopped them into a bowl. Satisfying and empowering!

When the vines were picked clean, we commenced to shelling the little beauties. This also required time but was still relatively simple and highly enjoyable.

Bare seeds were stashed in a bowl on the pantry table. There, they could continue to dry. Every so often, we’d turn them over, just to make certain they had good circulation!

I was so proud of our first attempt! Who knew seed saving could be so easy?!

Approximately 6 weeks later, it was time to place the seed in labeled envelopes. Walking into the dark pantry, I flipped on the light and stopped short: were there beetles crawling on the white table cloth?

Moving closer to inspect the situation only confirmed that it was so! There were beetles crawling not only on the table, but in our seed! Whisking the bowl outside, its contents were thoroughly examined.

Strange. There were dark circles on some peas and perfect holes in others, resembling a one-side bead.

And then I saw it. I saw them!

I shouldn’t fail to mention that goosebumps broke out on my skin. Bugs galore will do that to this gal! Shivers!

Peeping out of the holes were little antennas. Ugly antennas. Little heads were peering out of those perfectly drilled holes in the peas.

Could it be possible?

Suspicion arose and shortly after, I had a needle in one hand and a seed in the other. The dark circle was pierced and out came a mostly-developed something. Ugh!

The capping was punctured on another, and another. Every time, there was a very-ready-to-emerge pupae, nestled into the perfectly drilled holes of my heirloom Amish Peas.

Yuck! A shiver went through me along with a sickened feeling. My hopes and my seeds were infested.

Knowing the pests ought not be allowed to hatch, the seeds were promptly submerged in boiling hot water. Needless to say, scores of beetles floated to the surface. Shiver!

My brain was slightly bewildered: what just happened?!

Research. That’s what happened! It didn’t take long to discover that in these northern parts, we have two types of these beetle-like creatures: the pea and bean weevil. Both make a stronger appearance during early, warm springs. The earlier you plant, the more likely you’ll battle this pest!

A sure sign that weevils are present in your pea patch? Both consume the leaf of the pea and leave behind a scalloped-like edging.

Our bean weevil lays her eggs on or in the pod (hence the dark, pin-like pricks we had noticed). Her young hatch and burrow into the seed. There, they live until they reach maturity and repeat the cycle. Unless of course, they happen to hatch out into my pantry!

How to Beat the Bean Weevil

Its difficult to combat the bean weevil in the garden. Row covers were one suggested method for those who want to seed save. But who wants to cover peas, particularly climbing peas?! Too complicated for this gal!

From all my research, it appeared that the easiest method to beat the weevil creature is to let it do its stuff.

Go ahead! Eat my plants! Lay your eggs! Die in my soil!

When the pods are ready, collect and shell them as normal. Make certain the seeds are 100% dry, pop them into a sealing bag (to keep the moisture out) and then place the bag in a freezer. After leaving it there for 3 days, the cold will kill weevil eggs, larvae and pupae.

Remove seeds from your freezer and transfer them to a breathable bag or envelope. Store in a dark, cool place.

This is the technique I plan to implement but have yet to try it. If you have, I’d love to hear from you in the comments!

The year this infestation took place, we later discovered there were others in our valley who had battled the bean weevil!

Unlike me, they saved their weevil-chewed seed. In spring they replanted the holey peas and from what I understand, there was still germination and a beautiful yield!

If your seeds have been attacked by the weevil, perhaps storing the seed in an airtight container is the way to go? The weevils can’t get out and as a result, die? But then, are there issues with a re-infestation?

I’m No Pro at Dealing with the Weevil

I’m new to this, a young learner. Do you have experience in the given area? Educate me and my readers! Leave a comment ’cause we’d love to hear your story. 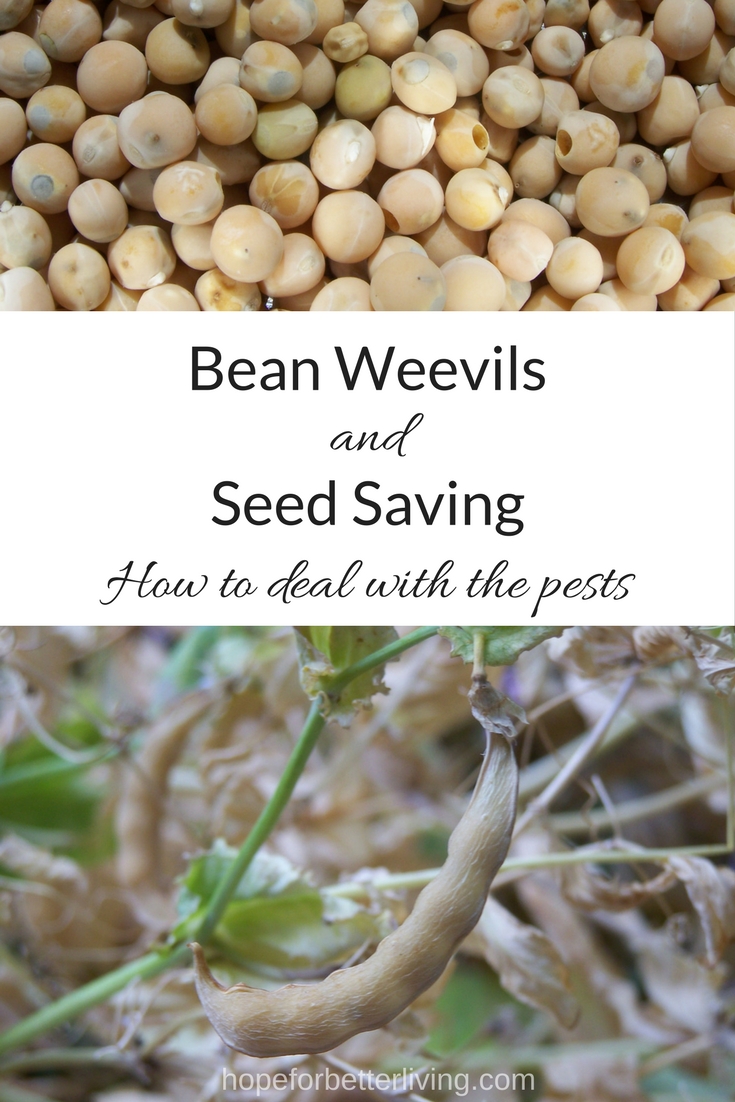