When it comes to raising children on the land, the internet readily unfolds itself: “how to breast feed between morning chores,” or “how to garden with youngsters in tow,” or “the 5 benefits of raising your family on a farm.”

Its good! But at times I’ve found myself wondering: why is there so little information about the effect this lifestyle has on a marriage? Interestingly enough, there’s silence, mostly silence from the homesteading community.

Don’t we struggle in our marriages? Or only with child raising, meal prep, spring cleaning, harvest overload, winter blues, caring for the sick chicken or goat?

The Truth About Working Together

Raising a garden, animals or crops alongside a spouse can be (and often is) a bonding experience. But it certainly does afford more opportunity for conflict!

C’mon folks! Don’t hide away. It DOES!

Working alongside your spouse can be an amazing experience. Yet it can be difficult. It can be hard on a marriage.

Not so long ago, I was thinking back to our first natural living attempts as a married couple. It was extremely frustrating.

Why? Because in spite of wanting to work together, it seemed we never could without a disagreement. And we couldn’t understand why everything fell apart so quickly. We wanted (and even needed) to do this life together!

Folks, I confess: we almost gave up! The plain, simple truth? Life was easier if we didn’t attempt to work side by side!

And yet? Something inside of us just wouldn’t accept this unpleasant reality. Doggedly, we plodded onward and bit by bit, the light began to shine through.

Lessons learned opened the doorway to change (see When Working Alongside Your Spouse Isn’t Working) and from there we began gaining ground.

While I love the aforementioned post, there’s so much more we’ve learned along the way! So here, my friends, is the rest of the story. 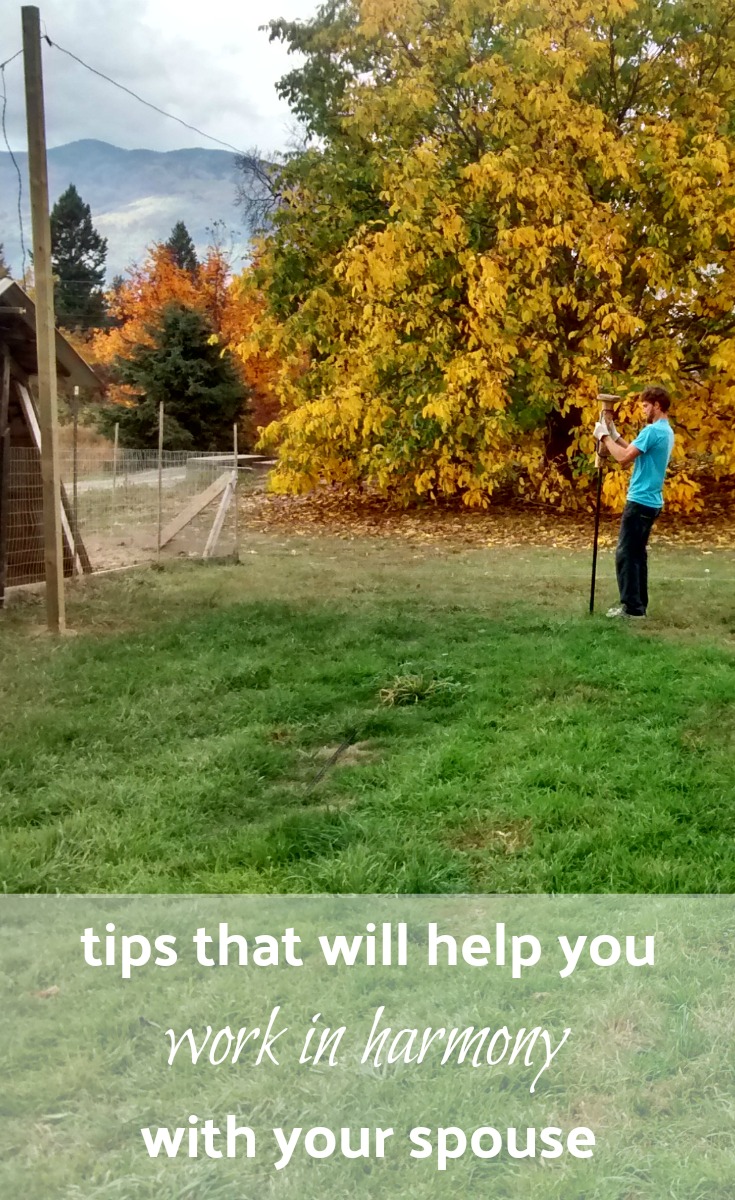 Establish a Foreman for Regular Chores

When setting ourselves to accomplish tasks, we found ourselves disagreeing…often! Our brains worked on two different levels and we repeatedly frustrated each another with 101 differing ideas.

That is, until my man recognized the need for a foreman. As a result, we divided the chores between us. Now, we “reside” over different and specific tasks.

The foreman does the research (if needed), decides on a game plan and calls the final shots. While the other is free to voice their opinion, the foreman has the ultimate say. Why? Because its his/her task and responsibility.

Having designated areas we oversee works well. Instead of overlapping time and research, it enables us to hone in on our particular chores with efficiency! And while we certainly help one another complete tasks, we try to remember when working in the foreman’s field that its his/her domain.

When There Isn’t Foreman

While the above scenario worked well for regular chores, there were times when both brains (and bodies) were necessary to accomplish the task at hand. Slowly, we began to learn other relational skills that helped us move forward.

Working together requires an “us” mentality

This is the crux, the essence, heart of, the key to working together. Big egos (male or female) lead to run-ins and frustration! Slowly, we began to realize there wasn’t a top dog or an underdog, that there was neither you nor me. There was only us. Once recognized, run-ins began to make us feel that we lost; somehow we had lost the battle. 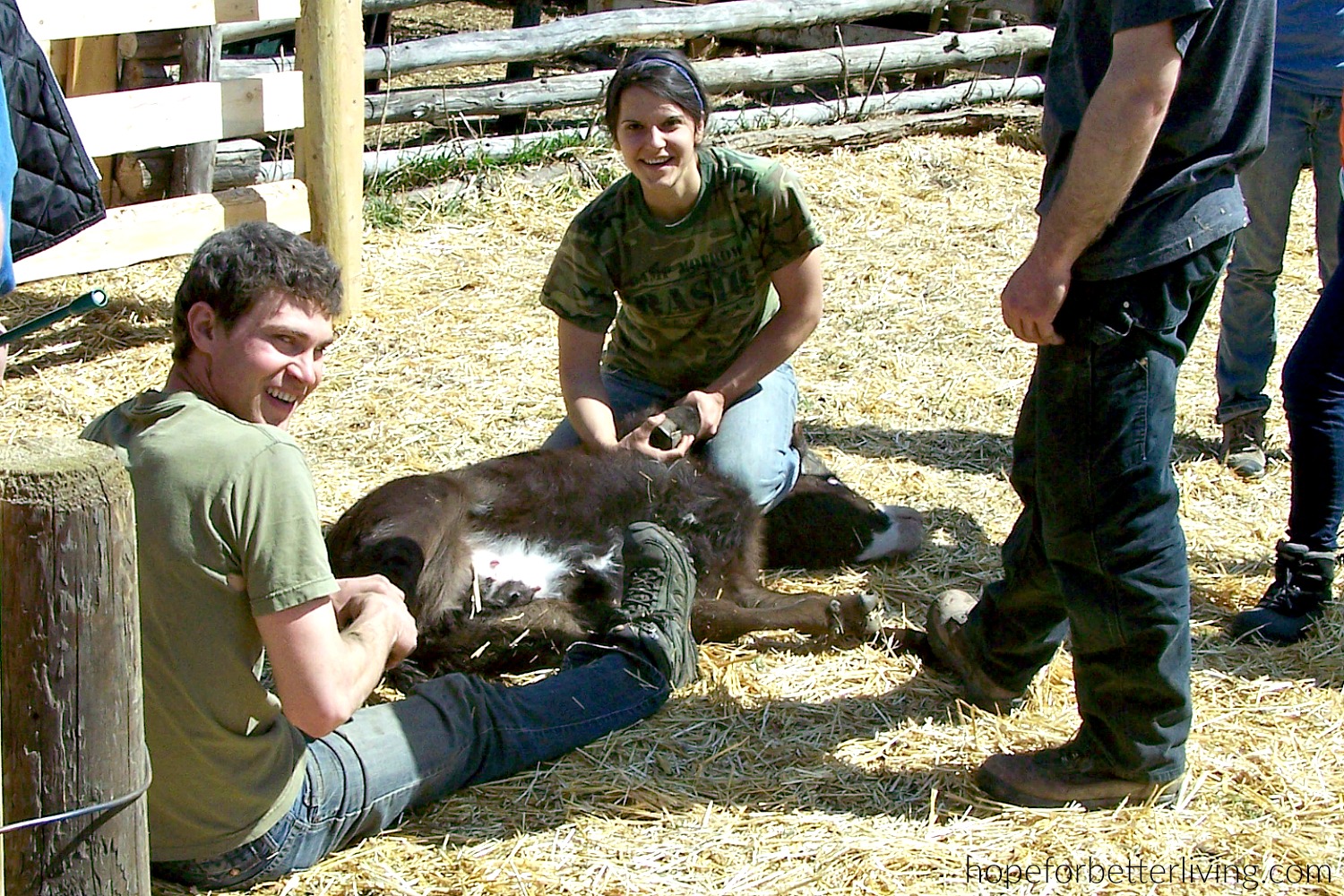 Discuss the game plan before attempting to make it happen

This can eliminate confusion, particularly if working on different ends of the pasture! Don’t rely on your previous experience or make assumptions, but talk it through and make certain the same plan has formulated in both minds!

Be respectful of differences

Be willing to take your spouse’s thoughts into consideration. If they hit on a sound idea, one worth doing, be humble enough to act upon it! If perchance their idea isn’t good, respect can still be shown in how their idea is turned down.

Give each other elbow room

Recognize that not everyone approaches tasks the way you do (confession: I struggle with this one)! Usually, there isn’t a right or wrong method to building fence, clipping the bird’s wing or feeding livestock.

Unless your spouse is trying to pluck the goose before butchering it, let them do it their way. Though their techniques may differ from your own, it probably works for them or they wouldn’t be attempting to do it so! 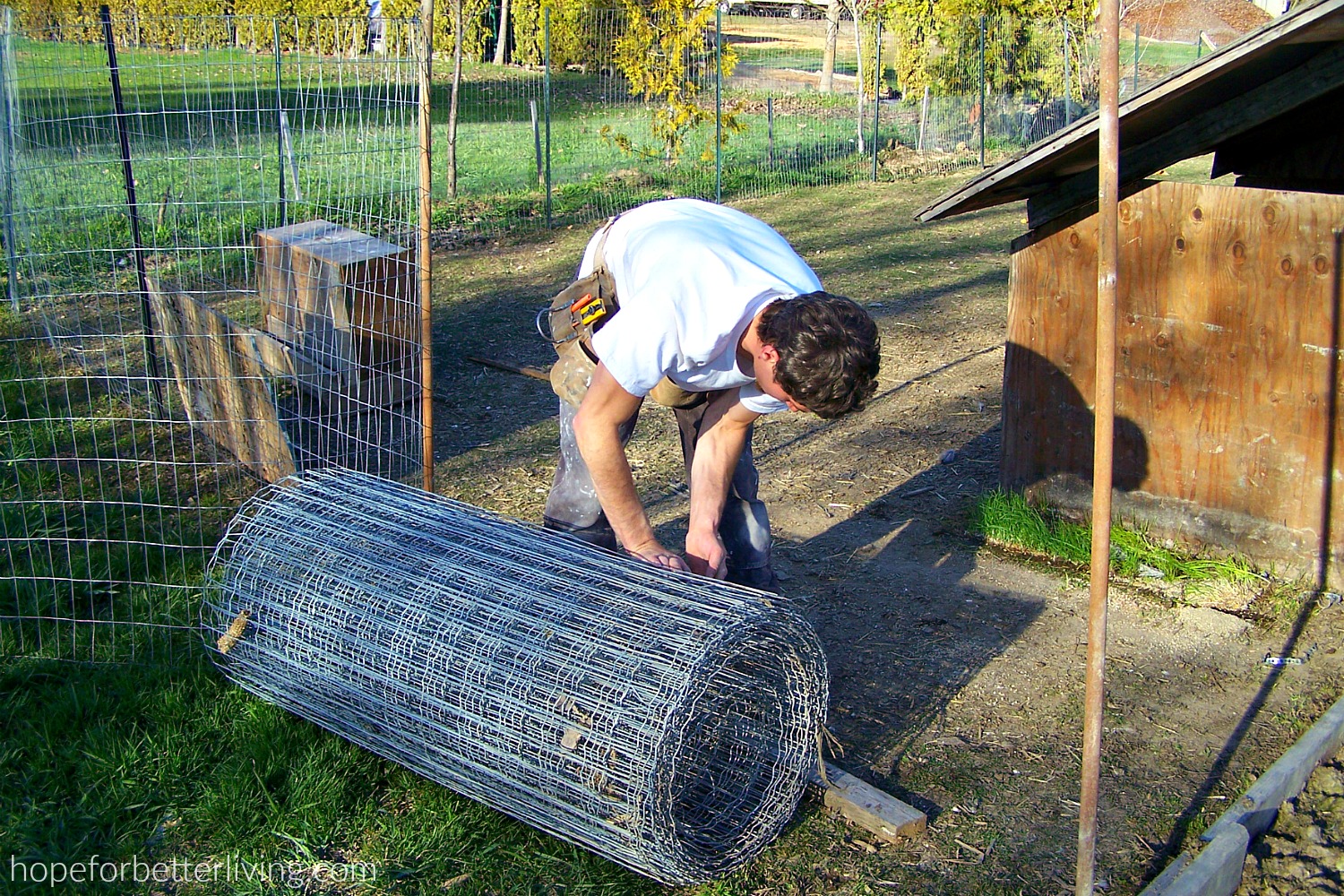 Recognize there will be times of frustration

It’s bound to happen. A bad day at work is easily carried over into evening chores. And if working alongside your spouse, its easy to let little things annoy you, even easier to say things you’ll regret!

Note: if you work with animals in this time, the opportunities for frustration are significantly higher. Animals are unpredictable and rarely have interest in your plans. Just saying!

We know we will mess up at times. It only means there’s opportunity to learn, consider new angles, to ask and receive forgiveness. It’s just part of life!

Confess when you’ve wronged or hurt the other person.

This is a key element for us, as mentioned in the previous post. You will wrong and hurt others. You will and you do. Care enough about the other person to clear the air.

When you apologize, make it sincere. Mumbling a “sorry” or the lame excuse of “I’m sorry but its your fault I responded the way I did,” isn’t sincere. These apologies are still self-centered and will act as a wedge, not a healing balm.

Take time to understand exactly what your actions or words have done. We all want to be with a trustworthy, respectful, considerate individual! Make the effort to be that person.

Be honest but keep the end goal in sight

Its easy, when cranky and tired, to get discouraged and complain, to let tempers or frustration flare. If disgruntled with life, be honest! There is a time and place to let your spouse know thoughts and feelings.

But keep your chin up! Think about the end result. The close of the day (or project) will come.

Think about where you want your relationship to be when the project is completed! Have your actions helped or hindered? Did your words encourage or drain your partner?

Face it: most of the time, we are glad someone else is helping! Express your gratefulness to your spouse. An uplifting attitude always makes the job go faster and draws out encouraging (rather than discouraging) words.

What have you implemented to help you work alongside your spouse? What worked well? What hasn’t? C’mon folks! We’re imperfect people working alongside imperfect people! Let’s talk about it in a way that helps those struggling with this part of life!

Previous Post: « When Working Alongside Your Spouse Isn’t Working (part 1)
Next Post: How to Choose the Best Turkey for Your Farm: Broad or Heritage Breeds? »